One of the week’s Homecoming celebrations, the Multicultural Block Party featured performances, llamas, henna, and more on Tuesday evening. 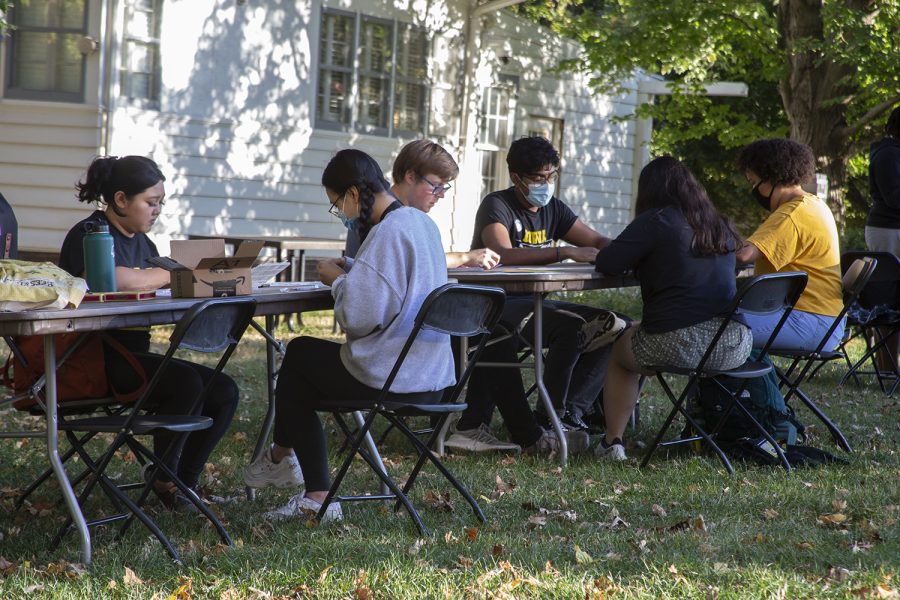 The University of Iowa’s multicultural block party by Slater hall on Tuesday Oct. 12th from 5-8pm during homecoming week. The block party was hosted by the cultural centers. A few of the many activities included were henna, bracelets and origami.

About 100 students gathered in the grassy area behind Slater Residence Hall and the Pride Alliance House, which teemed with free activities that promoted resources provided by the centers.

“I think one of the biggest things in contrast to years past was making [the Multicultural Block Party] a way that students learn how to become allies and more educated in what these resource centers are, instead of just coming for the food and the performances, but would also take away information that they can learn how to utilize these centers,” Homecoming Council Co-Multicultural Director Lisa Truong said.

This year, a ticketing system was created using 30 QR codes spread across the event to grant access to the free activities, which included petting the llama and alpaca or jumping in the bounce house. Event attendees scanned a QR code to answer questions in relation to the cultural centers.

“They’re pretty simple, standard questions about the centers, like what the acronyms mean, when do they host their heritage month and the idea of like, ‘These are the traditions they hold,’” Truong said. “And our theme for Homecoming this year is ‘Moving Tradition Forward.’”

Some students also attended the party for free local food from Molly’s Cupcakes, Mammitas, Island Vybz, and Exotic India, and left with knowledge and connections made with the cultural centers.

UI first-year student Gabriel Arboleda said he came to the event for the food, but added that he saw the diversity on campus while there, which was eye-opening.

“I think it adds a bit of flavor, showing the diversity of the students on campus,” Arboleda said. “A lot of us come from all parts of the world, and I think it’s good that people can now experience the different cultures in front of them.”

“I love a cappella and to see those different groups has been really cool. Also, the llamas, can’t go wrong with llamas,” fourth-year student Shayna Ungerleider said. “I think it’s really important to show freshman and like any grade that there are people that are welcoming from every community, even if you aren’t involved or like a part of that community.

The Multicultural Block Party provided a welcoming space for underrepresented students at the university, allowing for visibility of the different cultures present on campus.

“I think it’s really important to spread diversity on campus,” Pride Alliance Center Student Lead Linh Pham said. “I know a lot of students don’t know that we have actual cultural centers here since we’re so far from the centralized area of campus.”