The left-handed shooter played with the USHL’s Cedar Rapids RoughRiders from 2015-17. 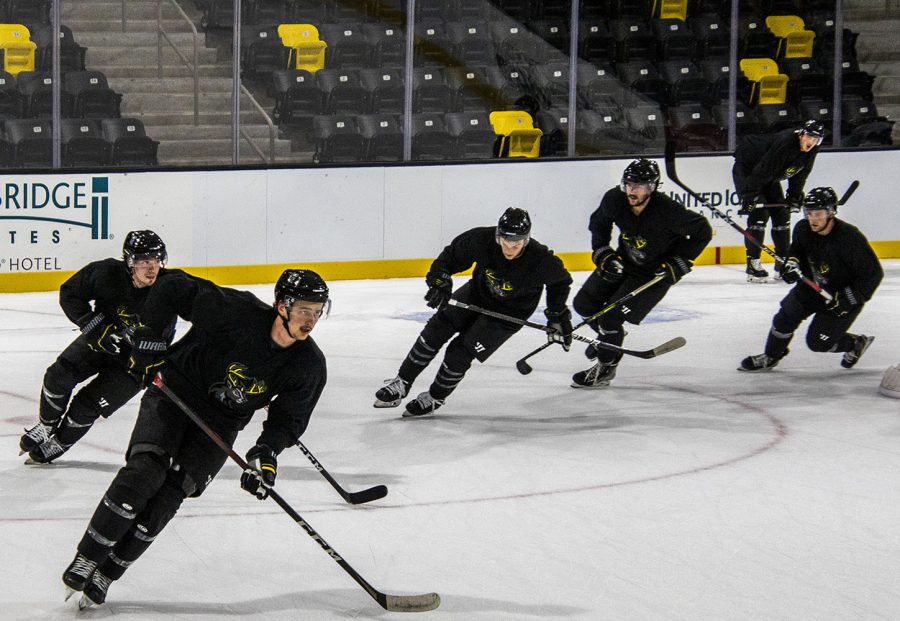 Players move around the arena during the Heartlanders first practice on Monday, Oct. 11, 2021.

Riese Zmolek hasn’t ice skated in Iowa in nearly four years. The last time he did so, he was playing for the Cedar Rapids RoughRiders — a junior team in the United States Hockey League.

Now, the Rochester, Minnesotan, is back in eastern Iowa to play for Coralville’s new ECHL team, the Iowa Heartlanders.

Zmolek went to college at Minnesota State University from 2017-21. The Mavericks made the NCAA Frozen Four when Zmolek was a senior.

The Minnesota Wild can promote or demote players from the highest level of professional hockey to the lowest.

“Worked out pretty cool,” Zmolek said. “Blessed to be able to play pro hockey, playing after college, so very happy and pretty familiar place as well.”

While he played in Cedar Rapids, Zmolek learned a lot from RoughRiders head coach Mark Carlson, who he still texts today.

“I think work ethic too, he teaches that a lot,” Zmolek said. “You don’t see that too often anymore but love it. He pushes you to be the best that you can be. Couldn’t have asked more out of a junior spot.”

At Minnesota State, Zmolek helped his team win four conference championships. Zmolek was a team captain during his senior season with the Mavericks.

At the end of his collegiate career, Zmolek had registered seven goals and 33 assists.

“I was fortunate enough my freshman year to senior year, we had good squads year after year,” Zmolek said. “Finally got over that hump our senior year, got to the Frozen Four, came up a couple games short but proud of that group.”

The 25-year-old Zmolek wants to play in the NHL someday, just like his father, Doug Zmolek. Doug participated in 467 NHL games from 1992-2000 with the San Jose Sharks, Dallas Stars, Los Angeles Kings, and Chicago Blackhawks.

Riese Zmolek said he will text his father if he’s struggling on the ice this season. For the most part, however, Doug Zmolek is letting his son find his own path to the NHL.

Heartlander head coach Gerry Fleming said he hopes Riese Zmolek can become as good a player with the puck as he is without it. Fleming believes Zmolek can play in the NHL if he can develop his skills with the puck.

“We just want him to be a complete player,” Fleming said. “If he’s going to play beyond this level and hopefully aspire to play in the NHL, which he does, he’s going to play in that bottom-role six, so good penalty killer, good on all those essential things that those bottom-six NHL guys have to do consistently all night in and night out.”

The Heartlanders’ first 2021-22 regular season game is scheduled for 7 p.m. Oct. 22 at Xtream Arena against the Kansas City Mavericks.