The Hawkeyes and Cowboys previously wrestled outside at "Grapple on the Gridiron" at Kinnick Stadium in 2015. 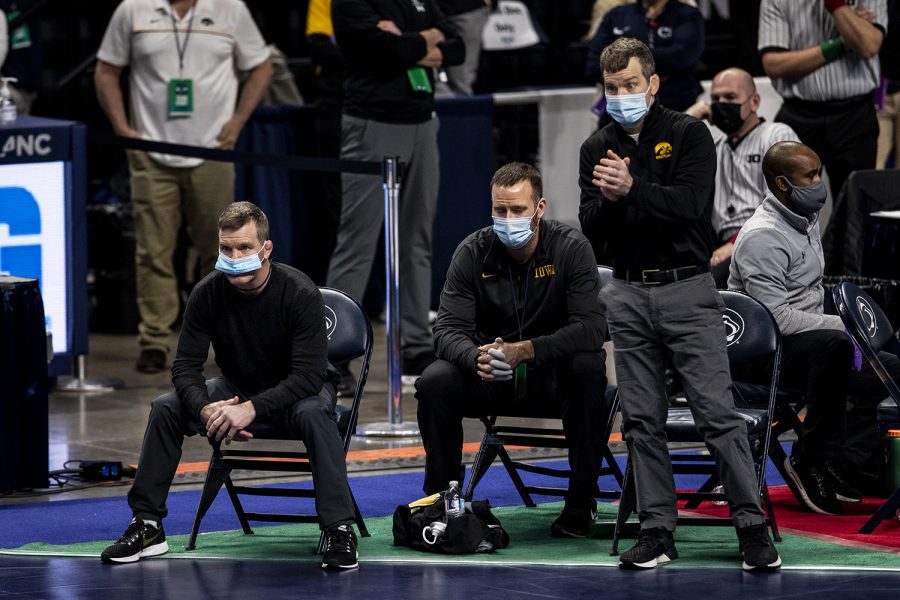 Iowa Head Coach Tom Brands and Associate Coach Terry Brands watch as Iowa’s Austin DeSanto competes against Penn State’s Roman Bravo-Young during the finals of the Big Ten Wrestling Tournament at the Bryce Jordan Center in State College, PA on Sunday, March 8, 2021. The Hawkeyes won the Big Ten Title with a team score of 159.5. This is the 37 Big Ten Title in school history.

REV Entertainment, in conjunction with Oklahoma State and Iowa Athletics, announced Tuesday that the Cowboy and Hawkeye wrestling programs will face each other at Globe Life Field in Arlington, Texas, Feb. 12.

The Texas Rangers’ stadium will play host to the dual, named “Bout at the Ballpark.”

USA Wrestling will also host the first-ever international competition at Globe Life Field on Feb. 12, an exhibition match against Iran.

“I am very excited to announce ‘Bout at the Ballpark,’” REV Entertainment President Sean Decker said in a release. “We are proud to have the opportunity to host a competition that celebrates four of the most iconic brands in the sport of wrestling, the Oklahoma State Cowboys against the Iowa Hawkeyes and USA Wrestling versus Iran. I want to thank these four great programs for their incredible cooperation in helping us put together this spectacular wrestling event.”

In the history of the Hawkeyes and Cowboys, Oklahoma State holds a 29-23-1 advantage.

“One reason why I think that this was a great opportunity for our student-athletes is just when you see Globe Life Field,” Oklahoma State men’s wrestling head coach John Smith said at a Zoom press conference with reporters. “… It makes a lot of sense that you need to give your student-athletes that opportunity. I mean, what an opportunity. So many athletes out there that don’t get to experience something like this, and here we’re gonna have 20 athletes in folkstyle wrestling at the NCAA Division I level.”

At the ballpark, two raised wrestling mats will be placed between the mound and second base. The USA-Iran and Oklahoma State-Iowa duals will take place simultaneously, starting at 6:30 p.m. The meet will be aired exclusively on FloWrestling, a paid streaming service. Tickets for the meet will go on sale on Oct. 14 at texasrangers.com/wrestling.

The matches will alternate throughout the event on two separate mats — marking the first time a professional and NCAA wrestling meet will compete in this format. The ballpark has a 27,000-seat capacity, but Decker said seats will be added, if necessary.

Iowa and Oklahoma State previously wrestled in “Grapple at the Gridiron” outdoors at Kinnick Stadium on Nov. 14, 2015. Then-No. 3 Iowa took down then-No. 2 Oklahoma State as over 42,000 fans looked on.

The NCAA gave all 2020-21 student-athletes an extra year of eligibility because of COVID-19, allowing all ten of Iowa’s starters to return for the 2021-22 season. Three-time NCAA Champion and Hawkeye Spencer Lee will return to compete for his fourth collegiate national title.

“We are benefiting from the COVID relief here as does everybody, we’re excited about that,” Brands said. “… We have some great storylines with some young talent, and that’s exciting for our fans. It’s exciting for our entire program and our coaching staff as well. We know the challenges laid out. The schedule is always here ahead of time. We circle, highlight, emphasize, asterisk, certain dates, and this is at the top of the list.”