Moss, the national leader in interceptions this season, suffered a knee injury while picking off a pass against Penn State. 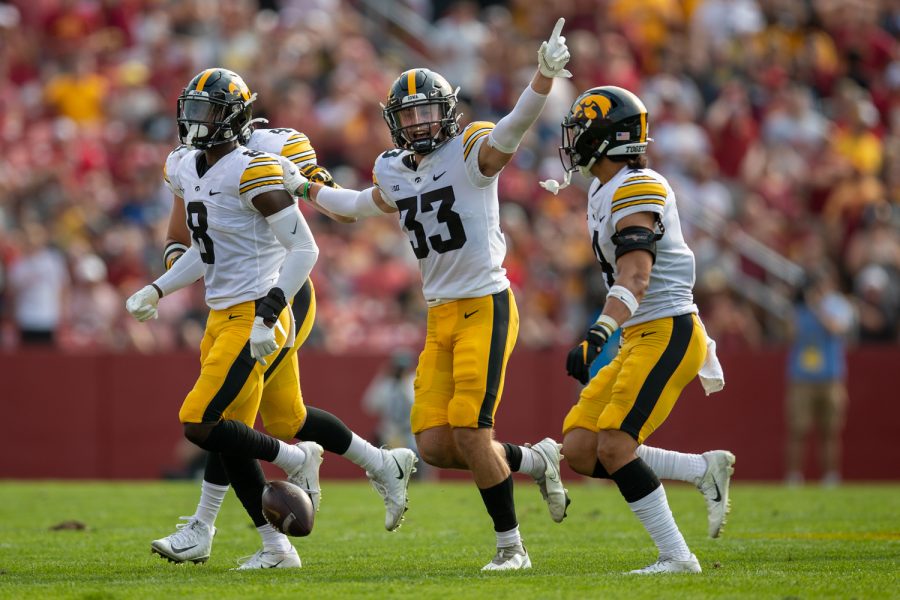 Iowa defensive back Riley Moss celebrates an interception from teammate Matt Hankins during a football game between No. 10 Iowa and No. 9 Iowa State at Jack Trice Stadium in Ames on Saturday, Sept. 11, 2021. (Jerod Ringwald/The Daily Iowan)

Iowa head coach Kirk Ferentz confirmed on Tuesday that starting cornerback Riley Moss is out for the Hawkeyes’ game against Purdue on Saturday because of an injury to his left knee.

Moss fell to the turf in pain after intercepting a Penn State pass in the second quarter of Iowa’s 23-20 win in Week 6. The senior did not return to the field for the rest of the game. Moss was seen leaving the Hawkeye football performance building on Tuesday with a brace on his left knee, but he was walking without crutches.

Safety Jack Koerner said that the team’s hope is for Moss to return after Iowa’s bye week next week. Junior Terry Roberts is listed as the starting right cornerback in Moss’s absence.

“The good news is I think we’ll get [Moss] back in a couple weeks, hopefully,” Ferentz said. “There were no surgeries involved, and that’s always a good thing.”

Ferentz clarified that Moss suffered his injury while coming down with the interception — not while briefly celebrating after the play.

Moss has started 21 career games and made 36 total appearances in his four years with the Hawkeye football program. The former Ankeny Centennial prep is currently tied for the national lead with four interceptions this season. In Iowa’s season-opener against Indiana, Moss returned two interceptions for touchdowns.

Roberts played cornerback in the second half against Penn State in Moss’s absence.

“Riley is a big part of the defense,” starting middle linebacker Jack Campbell said. “But throughout coach Ferentz’s time here, he’s always preached the, ‘Next man up’ mentality. You saw on Saturday Terry Roberts stepped in and did a phenomenal job. Whoever steps in there, you expect them to uphold the standard.”

Moss was not listed on the two-deep depth chart the Iowa football team released on Monday. Roberts was listed as the starting right cornerback instead of Moss. Former Northern Iowa defensive back Xavier Williams is a new addition to the depth chart as the No. 2 left cornerback behind starter Matt Hankins.

Hawkeye fans are used to seeing Roberts down punts inside the opponent’s 5-yard line as a gunner on special teams. But Ferentz has said throughout the season that Iowa’s coaching staff thinks of Roberts as a starting-caliber cornerback.

Roberts’s teammates in the secondary agree.

Iowa’s defense leads the nation in turnovers forced (20) and interceptions (16) this season.

The Hawkeyes have the two highest-graded cornerbacks in the country — Moss (90.2) and Hankins (89.6) — according to Pro Football Focus’s metrics. Roberts (5-foot-10, 180 pounds) is replacing the No. 1 ranked player at his position in college football against a team that has defeated the Hawkeyes three of the last four seasons.

Purdue beat Iowa, 24-20, in West Lafayette to open the 2020 season. The Boilermakers compiled 282 passing yards in their victory — the most for an opposing team against the Hawkeye in the past two seasons.

Boilermaker wide receiver David Bell torched the Hawkeyes for three touchdowns last year, and has put up 26 receptions for 318 yards and four scores in two career games against Iowa.

“I don’t want to depress myself and look back at how many catches he’s had [against Iowa] the last two years, but it’s a lot,” Ferentz said.