Hankins is the second Hawkeye to earn that honor this season. 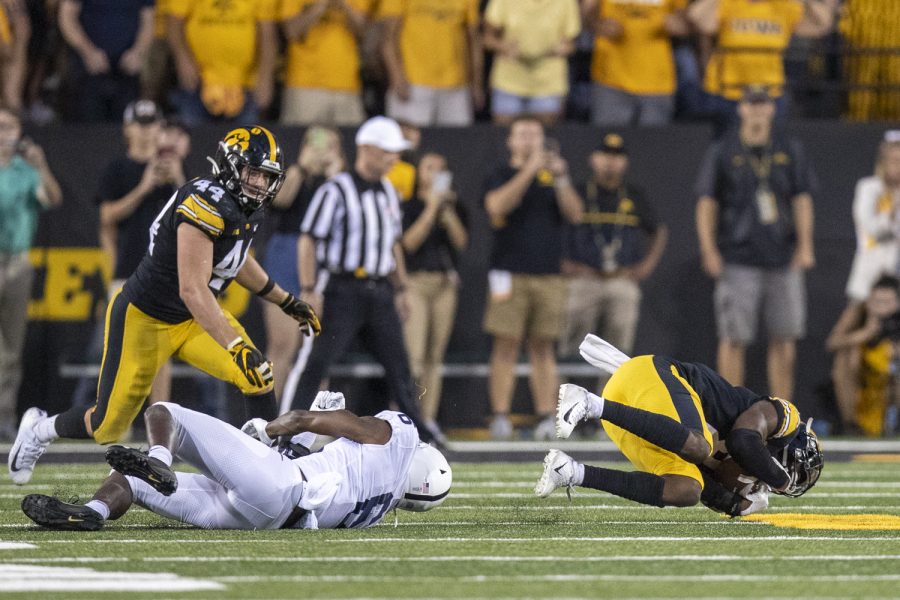 Iowa defensive back Matt Hankins intercepts a pass during a football game between No. 3 Iowa and No. 4 Penn State at Kinnick Stadium on Saturday, Oct. 9, 2021. The Hawkeyes defeated the Nittany Lions 23-20. (Jerod Ringwald/The Daily Iowan)

Hankins picked off a pass and was credited with five tackles in Iowa’s 23-20 win over Penn State. The fifth-year starter’s pick game was Iowa’s fourth and final interception of the day. Hankins was credited with a solo tackle on a Penn State fourth-and-three attempt with 3:39 remaining, stopping a Nittany Lion drive that crossed midfield.

The 6-foot, 185-pounder then stopped Penn State’s next possession with an interception on fourth down, his third of the season. Hankins had two interceptions earlier this season in Iowa’s 27-17 win at then-No. 9 Iowa State.

Hankins has started 22 consecutive games and has 33 career starts. He returned in 2021 for a fifth season. He has totaled 188 career tackles and six career interceptions. He is part of an Iowa defense that has a nation-leading 16 interceptions through six games.

This is the fifth time a Hawkeye player has earned this weekly honor and the second time in just three weeks. Hawkeye junior linebacker Jack Campbell received the honor after Iowa’s 24-14 win over Colorado State on Sept. 25. Prior to that, Josey Jewell was the last Hawkeye to receive the honor in 2017. Iowa has had a Bronko Nagurski Trophy finalist in two of the last four seasons (Daviyon Nixon in 2020; Jewell in 2017).