The University of North Dakota transfer is set to play a variety of positions for the Hawkeyes this season. 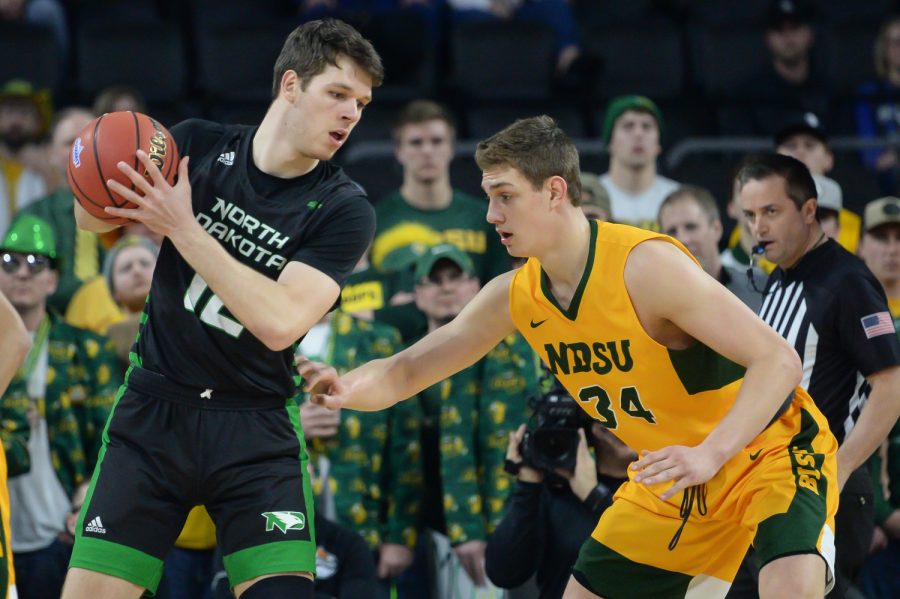 Iowa men’s basketball transfer Filip Rebrača spent his summer in Iowa City putting on weight, lifting, and preparing for the physical gauntlet that is a Big Ten basketball season.

The University of North Dakota transfer was on track to join the Hawkeyes again in the fall after a brief trip home to Serbia — but the trip lasted longer than planned.

Rebrača got sick with a severe illness while in Serbia, and couldn’t fly back to the U.S. for multiple weeks. He said he started to feel ill the day before he was slated to come back to Iowa City.

“It was something with my lymph nodes, and it was actually worse than COVID, I’d say,” Rebraca said at Iowa Men’s Basketball Media Day Monday. “I felt like I put three weeks in Serbia, I did a lot of work, worked out almost every day on my body and on my basketball and I just felt like it was all taken away from me in two weeks.”

Head coach Fran McCaffery said he recruited the 6-foot-9, 230-pound transfer to play big-time minutes for the Hawkeyes this season. He noted Rebrača’s versatility and wide skill set as factors for taking the center out of the transfer portal.

McCaffery said that Rebraca is fully healthy after dealing with his illness.

“He is going to play a very important role, we need him,” McCaffery said of Rebrača. “A veteran guy, he’s not been here, but he’s a veteran guy. He’s big and strong and he can do a lot of things. So he was recruited to be a major factor and he will be.”

McCaffery added that the 24-year-old will also provide leadership with his experience playing both internationally and collegiately.

Out of high school, North Dakota was Rebrača’s lone Division I offer. But after three seasons in Grand Forks — two as a starter — the versatile big man wanted to challenge himself with a high-major institution.

Rebrača scored in double figures in 33 of his last 34 games at North Dakota, and registered 76 total blocks in his career.

Rebrača and the Hawkeyes begin their schedule with an exhibition against Slippery Rock on Nov. 5 at Carver-Hawkeye Arena.