The Johnson County Department of Natural Resources has successfully controlled the spread of reed canary grass, an invasive plant species along the Iowa River Corridor, through a three-year rotation method. 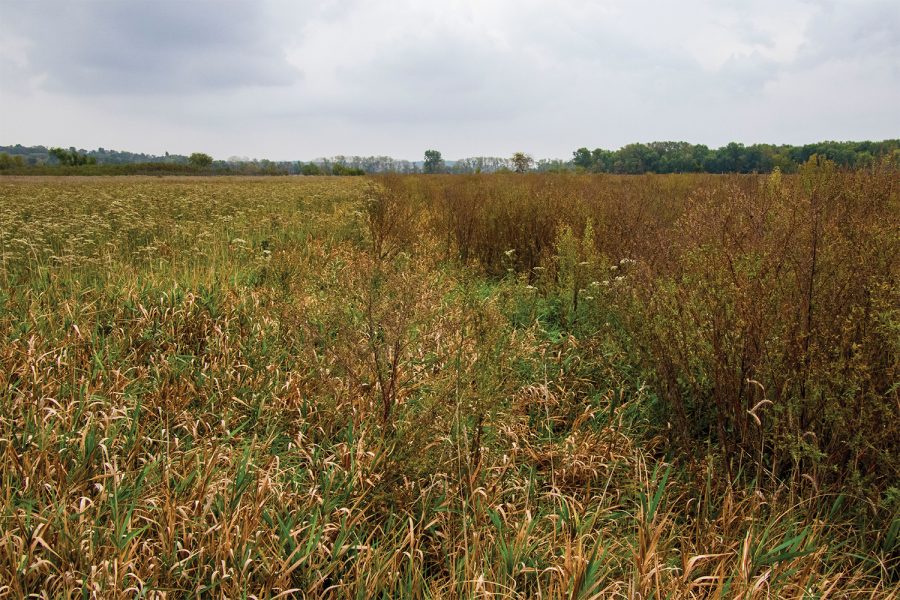 A split field in the Iowa River Corridor project on Thursday, Oct. 7, 2021. Reed canary grass which is an invasive species can be seen on the left, while native species to Iowa Wetlands flourish on the right after removal of the reed canary grass.

After a long and difficult battle against reed canary grass, an invasive plant species living along the Iowa River Corridor for decades, the Johnson County Department of Natural Resources says it has successfully controlled its spread.

Reed canary grass reduced the diversity along the Iowa River Corridor by out-competing the native plants around it. This created a monoculture — an environment surrounding the growth of one plant — that lacks the food and habitat needed for wildlife to survive in the area, decreasing wildlife populations.

“Where we’re doing this, we are slowing it down quite a bit,” Woodruff said.

By the third year, the reed canary grass will begin overtaking the native plants again and the process of baling and spraying will restart.

“Their underground structures are such storage organs that even if you manage to kill off the top with herbicide, there’s enough residual life left in the plant that it comes roaring back,” Irish said.

Reed canary grass was introduced in Iowa after major flooding in the 1800s because it helped prevent soil erosion along waterways, said Chris Jones, research engineer for the Iowa Institute of Hydraulic Research.

While the grass was able to provide short-term benefits, Jones said it quickly outcompeted the native vegetation.

“There’s trade-offs with all environmental stuff,” Jones said. “Whether it’s good, bad, or indifferent is difficult to say depending on what everyone’s environmental objectives are.”

Woodruff said the battle with reed canary grass has been a varying effort to contain its spread over several decades. The back and forth was exacerbated by major flooding in Iowa, which allows the plant’s seeds to travel and germinate, he said.

Part of this year’s success in managing the invasive plant can be attributed to drought conditions, Woodruff said. Because reed canary grass thrives in moist, wet environments, the dry conditions over the year have stopped the plant’s seeds from spreading and germinating along the corridor.

The fight against reed canary grass has been filled with progress and setbacks, but Woodruff said he believes this time around could be different.

“I think because we know more about how to manage it, it’ll become a more long-term success,” he said.