Iowa volleyball swept by No. 6 Purdue 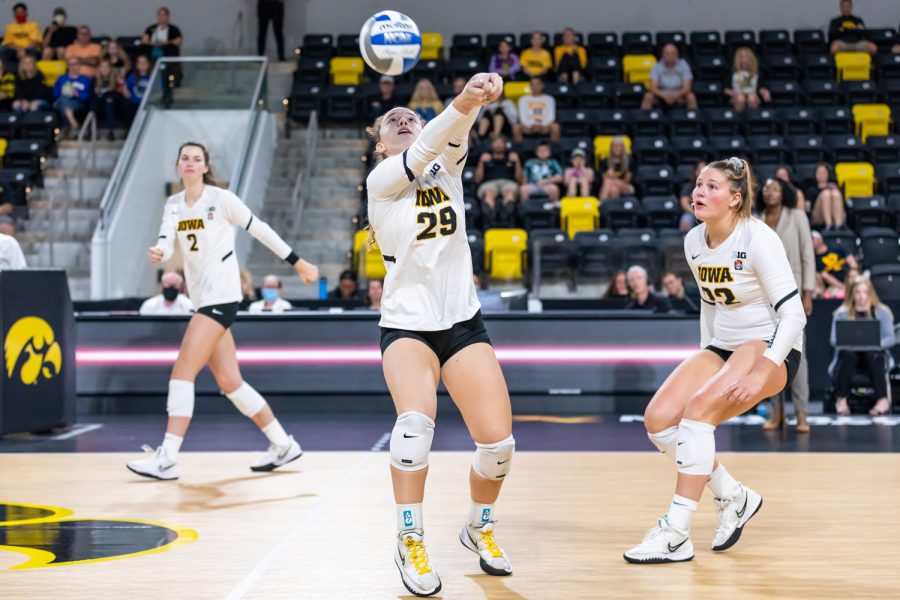 Iowa volleyball extended its losing streak to eight matches Saturday night after the Hawkeyes were swept by No. 6 Purdue.

The Hawkeyes have been swept in five consecutive matches and have yet to win a Big Ten contest this season. Iowa is 2-14 overall and 0-6 in Big Ten play.

On Saturday night, the Hawkeyes’ offensive struggles continued as Iowa was outkilled 47-27 and could only muster a .124 hitting percentage.

“I think the distribution on offense was there,” head coach VIcki Brown said.  “But overall, I think we were just too inconsistent on that end. We need to clean up our first contact, and when we do that, we are able to make teams play out of system defensively and that is key.”

Iowa’s offensive struggles allowed Purdue to remain in-system throughout the match, and the Boilermakers registered five blocks on the Hawkeyes.

Purdue All-American outside hitters Grace Cleveland and Caitlyn Newton led the charge for the Boilermakers, as the seniors both amassed double-digit kills in the match..

The Hawkeyes dropped to 2-14 on the 2021 season — sole possession of last place in the Big Ten.

But after a tough stretch of ranked opponents that included No. 12 Nebraska, No. 4 Wisconsin, and No. 6 Purdue, the Hawkeyes will have matches against two unranked opponents next week — Illinois and Northwestern.

Inconsistency is the disease that has plagued the Hawkeyes this season. What started as defensive inconsistency in the beginning of the year, has slowly infected the Iowa offense.

Iowa had zero players record double-digit kills for the first time this season, and senior outside hitter Courtney Buzzerio struggled, finishing the match with three kills and eight errors.

Setters Bailey Ortega and Jenna Splitt also struggled to facilitate, combining for only 21 assists in the match.

“Overall, I think being consistent is key to helping us find success,” Brown said. “We just need to find a way to play cleaner with less unforced errors and that will help us find consistency.”

Iowa volleyball will travel to Champaign to face Illinois on Wednesday. The Illini are 11-6 overall  and 3-3 in Big Ten play.

The Hawkeyes have already played the Illini once this season, falling 3-2 at Xtream Arena Sept. 22.

Illinois freely attacked the Iowa defense at Xtream Arena, as  Illinois graduate student outside hitter Megan Cooney finished with 17 kills. The Illini are a strong offensive team, with four players registering over 100 kills on the season.

The match will be played on Wednesday night at 7 p.m. The contest will be streamed on BTN+.