Iowa's crowd was rowdy throughout the 23-20 Hawkeye victory. 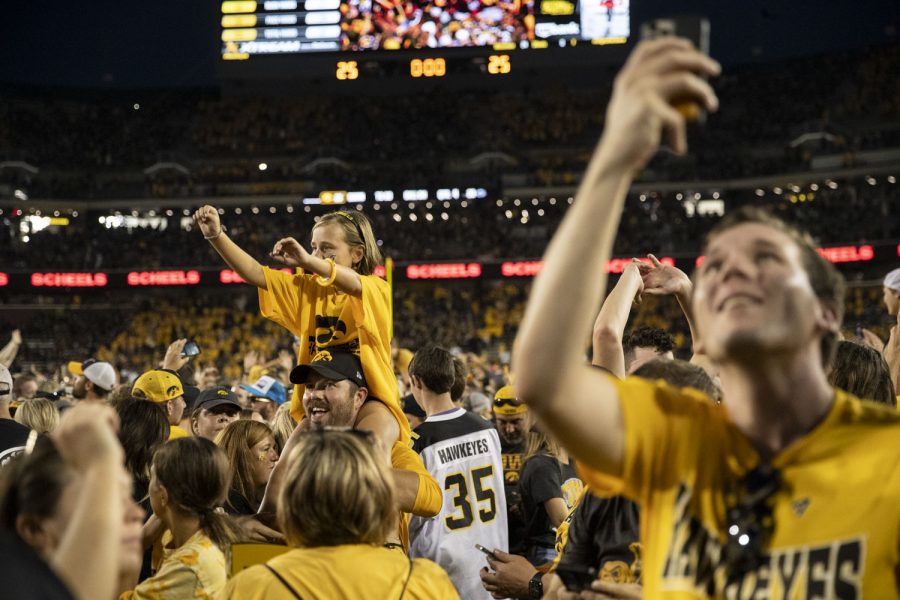 Iowa fans storm the field after a football game between No. 3 Iowa and No. 4 Penn State at Kinnick Stadium on Saturday, Oct. 9, 2021. The Hawkeyes defeated the Nittany Lions 23-20.

Iowa center Tyler Linderbaum blocked Penn State defenders all night, but getting past the Hawkeye fans blocking him from the locker room proved to be an entirely different challenge.

As soon as Iowa quarterback Spencer Petras took a knee in victory formation to end Iowa’s win over Penn State on Saturday, fans in black and gold poured out from the bleachers and onto the Duke Slater Field turf.

The No. 3 Iowa football team (6-0) overcame a 14-point first-half deficit and scored a game-winning touchdown with 6:26 remaining in the fourth quarter to defeat No. 4 Penn State (5-1), 23-20, in the first matchup between top-five teams at Kinnick Stadium since 1985. And as the game ended, Iowa players had to think about their escape routes.

“That was probably the hardest part of that game — trying to get through that mosh pit,” Linderbaum said. “I’m not going to lie. I might have a slight concussion from the amount of times I got hit on the head [by fans]. Just kidding, don’t tell the trainers.”

The hundreds of Hawkeyes who spilled out of the stands had plenty to celebrate.

A few hours before Petras hit wide receiver Nico Ragaini for the go-ahead 44-yard score, Iowa trailed 17-3 with 12:31 remaining in the second quarter. It was the first double-digit deficit the Hawkeyes had faced in their last 18 games.

But with six-and-a-half minutes left in the game, Iowa started a possession in Penn State territory down by four points and had the chance to take the lead. It took one play to do so.

Petras faked a handoff to Iowa running back Tyler Goodson, and connected with a wide-open Ragaini, who had faked an in-breaking route before running back out toward the sideline and positioning himself to catch his first touchdown since 2019.

Defensive tackle Logan Lee and Petras both proclaimed that Saturday’s atmosphere was the loudest they had ever heard at Kinnick Stadium, particularly when Penn State’s offense was called for back-to-back-to-back false start penalties.

“I-O-W-A” and “Let’s go Hawks” chants roared throughout the stadium when Penn State got the ball back after Iowa took the lead. After the Nittany Lions turned the ball over on downs twice, punted, and threw an interception on their final four drives of the game, Iowa fans stormed the field under the Kinnick lights as if they were mimicking the Hawkeye swarm.

“That’s one of those things that you love to see,” Petras said. “It’s super fun. If you go back and look at the biggest games in our program’s history, the crowd is usually down there storming the field. What a way to celebrate that win.”

Fans started screaming as they sprinted toward midfield and embraced Iowa players and coaches.

Some Hawkeyes, like Arland Bruce IV and Tyrone Tracy Jr., met their families behind Iowa’s bench on the sideline. Fifth-year cornerback Matt Hankins had been part of two prior field-stormings at Kinnick Stadium — against Ohio State in 2017 and Minnesota in 2019 — and opted to spring right to the locker room as the game ended to avoid the being stuck on the field.

Petras was met by a friend, who hugged him before they were both pushed to the ground.

“I fell on top of her,” Petras said. “It was pretty scary for a second. I was like, ‘We have to get up because we could get trampled real quick.’ She was not exactly understanding.”

Offensive lineman Jack Plumb and fullback Monte Pottebaum helped Petras up and provided blocking lanes for him all the way to the locker room. Some Hawkeyes didn’t make it back in time to hear Ferentz deliver his postgame speech because they couldn’t maneuver through the thick Iowa crowd.

The onlookers at Kinnick Stadium’s first sold-out game of the year may not have thought they would have a reason to storm the field when Petras went one-for-nine passing for 14 yards and an interception in the first quarter, or when Iowa’s defense allowed two first-quarter touchdowns.

But Petras and the Hawkeye offense settled in, as did the Iowa defense.

One play before Penn State kicked a field goal to go up 17-3, starting quarterback Sean Clifford was drilled by Iowa linebacker Jack Campbell and left the game with an injury. He did not return. Clifford’s replacement, Ta’Quan Roberson, only led the Nittany Lions to three points the rest of the game.

Before Hawkeye fans got on the field, the noise from the crowd disrupted Penn State’s offense throughout the game. The Nittany Lions recorded eight false start penalties — a result of the crowd noise inside Kinnick Stadium. There was more to cheer about as the game went on.

Both Nittany Lion quarterbacks threw two interceptions on the day, giving Iowa’s secondary 16 on the season. And Petras finished 17-of-31 for 195 yards with two touchdowns and an interception after his shaky start.

The result was Iowa’s 12th straight win overall and its sixth straight over a ranked opponent.

Ferentz said Iowa expected to have a great crowd on hand for Saturday’s game, but the Hawkeyes couldn’t rely on it. It was still the players’ job to win the game. Hawkeye fans weren’t going to be on the field, Ferentz told his team on Monday.

But they were by Saturday night.

“The fans today were on another level,” Ragaini said. “I’d never seen anything like it. It was rowdy and I’ll truly never forget what today was like. This was like the biggest of big time, which was pretty awesome. You don’t get moments like this every day. It was mentally draining and physically draining. But we came out on top. We fought for it, and we deserve it.”