Former President Donald Trump swung through Iowa in a visit to rally Iowa Republicans on Saturday. 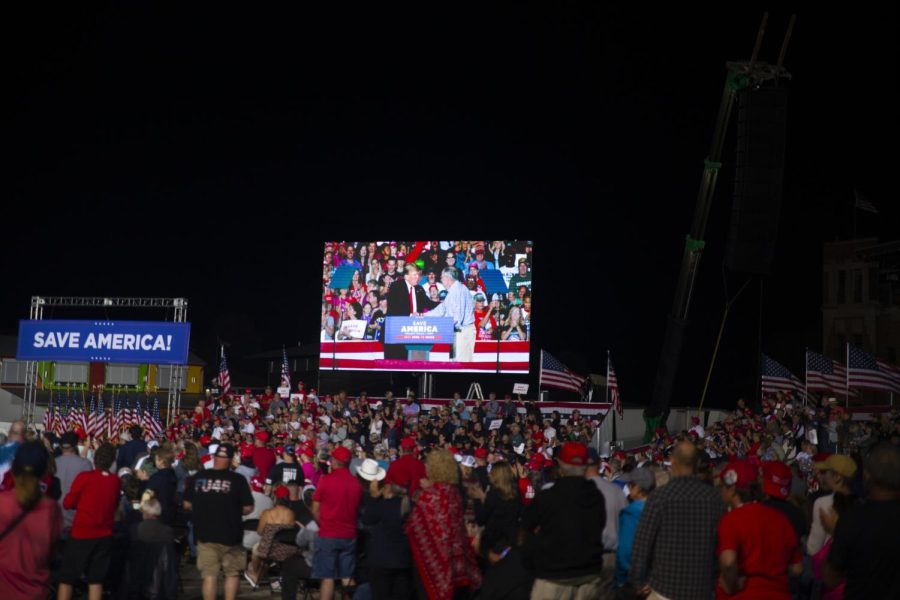 Former President Trump’s latest stop was Des Moines, Iowa, as he made the rounds across the United States to fire up his political supporters.

Iowa is the first state in the nation to hold presidential nomination precinct caucuses.

Trump made several familiar claims in the state he won in the 2020 election — some were true, and others were either exaggerated or outright false — especially his claims of election fraud.

Conjecture that former President Donald Trump is seeking back the White House job he held for four years continued to generate news – and fact checks – in Iowa on Saturday night, Oct. 9.

Trump’s latest visit was a Save America Rally that drew thousands of people to the Iowa State Fairgrounds in Des Moines, Iowa, and was run by Trump’s Save America PAC.

We checked some of the Republican former president’s Iowa comments. Many are familiar from previous appearances across the country. But, they bear paying attention to because Iowa has held the nation’s first presidential nominating precinct caucuses and, so far, figures to do so again in 2024.

“Just this week the latest Des Moines Register poll showed that Biden is a record low, 31 percent approval in Iowa … While your all-time favorite president … is at a record high, the highest we’ve ever been.”

Trump has received high marks among Iowa voters, especially Republicans. The most recent Des Moines Register/Mediacom Iowa Poll, reported Oct. 4, showed that 53 percent of Iowans have a favorable view of Trump, while 45 percent have an unfavorable view. The approval numbers are better than he had when president, The Register reported. The poll questioned 805 adults between Sept. 12-15. Its margin of error was plus or minus 3.5 percentage points.

Among Republicans, 91 percent had a favorable view of Trump in the Iowa Poll survey. Another 7 percent viewed him unfavorably, while 2 percent didn’t know, the survey showed. The flipside showed 99 percent of Democrats in Iowa viewing Trump unfavorably, and only 1 percent viewing him favorably.

Whether it was a mistake or intentional, Trump flubbed the numbers on President Joe Biden’s favorability rating — in the same poll, 37 percent of voters said they had a favorable view of the president, not 31 percent.

Beyond the latest poll, Trump can point to his 2020 electoral performance in Iowa. He won 53 percent of the November vote for president, while Democrat Joe Biden collected 45 percent. Other candidates got the rest.

Few Iowans are ambivalent about Trump. In that latest Iowa Poll, only 2 percent said they were not sure how they feel about him.

But some Republicans in other parts of the United States have been upset by Trump’s rallies. In Perry, Georgia, on Sept. 25, Trump upset members of the Republican establishment by calling Gov. Brian Kemp a disaster and saying he’d prefer Democrat Stacey Abrams, a rising star in her party and a frequent target of derision among Republicans, as governor.

“They’ve never been so successful as they are now because of what we did,” talking about giving billions in subsidies to farmers.

Agriculture income was a mixed bag during the Trump Administration, in large part because of a trade war with China during which the federal government compensated farmers for lost sales. Net farm income – income minus expenses – increased from $75.1 billion to $81.1 billion from 2017 to 2018, went back to $79.1 billion in 2019 and up to $94.6 billion in 2020, U.S. Department of Agriculture data as of Sept. 2, 2021, show.

An analysis by The National Foundation for American Policy reported in January 2020 that Trump aid to farmers was exceeding federal spending on several federal government agencies. The nonpartisan research group, which focuses on immigration, international trade and other matters dealing with globalization and the economy, also reported that farm subsidies at that time exceeded how much the federal government spent on building naval ships and maintaining the United States’ nuclear arsenal.

PolitiFact looked into this when Trump previously made the false comment, which the fact-finders ruled to be “Pants on Fire.” That report showed that a Republican-led review of the 2020 election totals in crucial Arizona showed Biden with 45,469 more votes than Trump in Maricopa, the state’s largest county.

Not only was that close to the official results certified in November 2020, Cyber Ninjas, the firm hired to conduct the review, reported that Biden’s margin of victory was 360 votes larger than what the county’s official canvass showed.

Trump claimed that the audit showed “2,500 duplicate ballots,” but that claim is misleading. The previous fact check found that duplicate ballots are created when election officials find a ballot has inconsistent signature information and they contact the voter, but only one ballot is actually counted.

Trump also claimed that “10,324 voters might have voted in multiple counties.” This is an exaggeration of what the report says, and Maricopa County officials have said that the report’s criteria were not stringent enough to prove duplicate voting.

The report said it found 5,047 voters with the same first, middle, last name, and birth date, representing 10,342 votes among all Arizona counties. A report from Maricopa County officials, though, said the criteria used to identify voters resulted in false duplicates, and the firm should have used more specific criteria like social security number and driver’s license number.

“We won by a lot” in Wisconsin.

This is false. Biden won in Wisconsin with more than 20,000 more votes than Trump.

While he didn’t get into specifics, Trump made a similar claim about winning Wisconsin in August, which PolitiFact found to be “Pants on Fire.” It involves an email exchange in the early morning hours after Election Day from an election consultant to Claire Woodall-Vogg, executive director of the Milwaukee Elections Commission.

“Damn, Claire, you have a flair for drama, delivering just the margin needed at 3:00 a.m.” the consultant wrote. “I bet you had those votes counted at midnight, and just wanted to keep the world waiting!”

Woodall-Vogg responded about 10 minutes later: “Lol. I just wanted to say I had been awake for a full 24 hours!”

Right-leaning news organizations published the exchange and commentators jumped on it but Woodall-Vogg said the exchange was a joke, but inappropriate. Republican and Democratic observers were at Milwaukee’s absentee ballot-counting center until all results were tallied and no evidence exists showing ballots deliberately were miscounted. Trump’s efforts to impugn the process lost in both a recount requested by Trump and a Wisconsin Supreme Court ruling.

“Illegal aliens and deadly drug cartels are taking over our borders.”

This is another topic PolitiFact has researched, as have fact-checkers with other news organizations. Border security drew interest in Iowa before Trump came to the state when Gov. Kim Reynolds joined nine other Republican governors for an Oct. 6 trip to Anzaldaus Park, in Mission, Texas, where the U.S. border with Mexico exists. The governors used the setting to sharply criticize Biden’s handling of border crossings.

U.S. Customs and Border Protection data show crossings of the Mexican border into the United States are at an all-time high, with 200,599 encounters in July alone and 195,958 in August. Data for September had not been compiled. That compared with 38,536 the previous July and 50,648 the previous August, the data show.

Austin American-Statesman fact-checkers wrote in March that a surge in immigrants was the result of drastic changes between the immigration policies of Biden’s and Trump’s administrations, but also worsening economic circumstances in countries where the migrants have lived, notably Mexico, Honduras, Guatemala and El Salvador.

PolitiFact reported in June that a U.S. Customs and Border Protection status memo on border wall construction between 2017 and 2020 showed about 738 miles of barriers were planned, of which 453 miles were completed. About 17 miles of completed wall were in Texas.

Another 285 miles were either under construction or in the pre-construction phase when Trump left office. President Biden ordered that the work be stopped on his first day in office, although another some 13 miles of wall is being built in a flood control plan that has pro-immigration activists upset, NPR News reported.

The Judiciary Committee issued two reports on Oct. 7 on the former president’s efforts to overturn the 2020 president election. One was from the majority Democrats and one was from minority Republicans, led by ranking member Sen. Chuck Grassley of Iowa. The two reports were based on the same testimony but had different conclusions.

The majority report said Trump repeatedly asked leaders of his Department of Justice “to endorse his false claims that the election was stolen and to assist his efforts to overturn the election results.” They added that Trump’s Chief of Staff Mark Meadows asked Acting Attorney General Jeffrey Rosen “to initiate election fraud investigations on multiple occasions, violating longstanding restrictions on White House-DOJ communications about specific law enforcement matters.”

“Trump allies with links to the ‘Stop the Steal’ movement and the January 6 insurrection participated in the pressure campaign against DOJ,” the report also said.

The report said Rosen threatened to resign and that other Justice Department lawyers would, too, if Trump persisted with his pressure and that Trump forced the resignation of a U.S. attorney so that he could appoint someone who would “do something” about his claims of election fraud, the report said.

The minority report didn’t dispute any of the testimony but said Trump followed the Justice Department staff recommendations and did not take actions that an assistant attorney general, Jeffrey Clark, suggested: sending a draft letter to some states with reported voter irregularities and recommending that their legislatures choose different Electoral College electors. Biden won the states in question.

The Republican report also noted that Trump did not fire anyone over these matters. It said the Republicans believe Trump had legitimate complaints and reports of crimes involving the election, and that he was reaching out to the Justice Department to make it aware of those complaints and doing its job of investigating them. He did not, the Republicans said, issue an order to take any actions.

Multiple audits and reviews have shown no evidence of widespread voter fraud, and have confirmed that Biden beat Trump in the election.

U.S. Department of Agriculture, “USDA Announces Details of Direct Assistance to Farmers through the Coronavirus Food Assistance Program,” May 19, 2020

PolitiFact, “Under three years of my administration, net farm income has already gone up nearly 50%,” by Julia Shanahan, May 22, 2020

PolitiFact, “Are migrants causing ‘carnage’ at the Texas border?” by Brandon Mulder, July, 2, 2021

White House executive order, “Proclamation on the Termination Of Emergency With Respect To The Southern Border Of The United States And Redirection Of Funds Diverted To Border Wall Construction, Jan. 20, 2021

U.S. Senate Committee on the Judiciary Majority Report, “Subverting Justice: How the Former President and his Allies Pressured DOJ to Overturn the 2020 Election”

U.S. Senate Committee on the Judiciary Minority Report, “In Their Own Words: A Factual Summary of Testimony from Senior Justice Department Officials Relating to Events from December 14, 2020 to January 3, 2021”