The Hawkeyes once trailed 17-3, but came back to improve to 6-0 on the season. 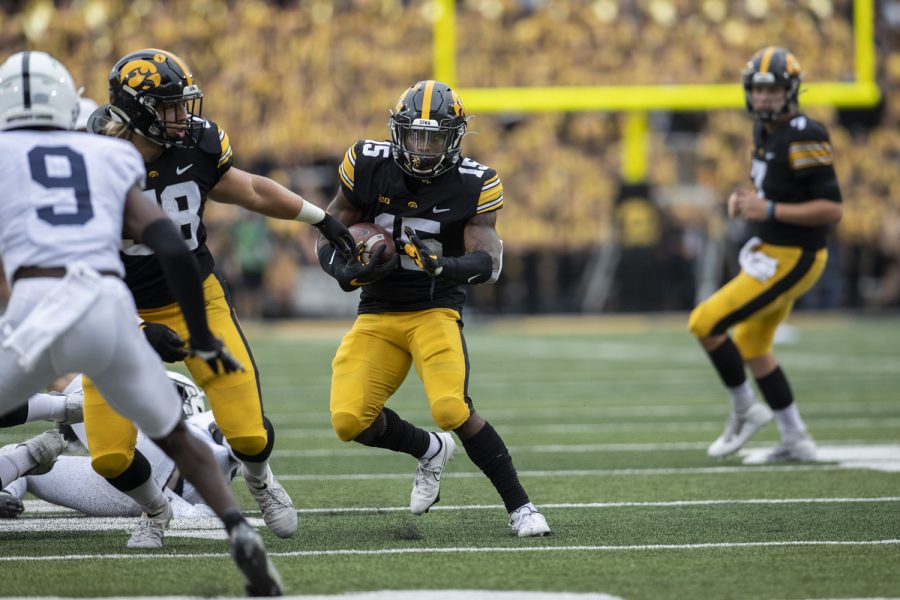 Iowa running back Tyler Goodson runs the ball during a football game between No. 3 Iowa and No. 4 Penn State at Kinnick Stadium on Saturday, Oct. 9, 2021. The Hawkeyes defeated the Nittany Lions 23-20. (Grace Smith/The Daily Iowan)

The No. 3 Iowa football team defeated No. 4 Penn State, 23-20, in the first matchup between top-five teams at Kinnick Stadium in 36 years. Iowa quarterback Spencer Petras hit wide receiver Nico Ragaini for a game-winning 44-yard touchdown with 6:26 remaining in the game.

The Hawkeyes jumped onto the scoreboard first. Penn State quarterback Sean Clifford threw an interception to Jestin Jacobs on the first Nittany Lion play of the day. Iowa took over at the Penn State 8-yard line, but had to settle for a field goal to take a 3-0 lead at the 11:08 mark of the first half.

Penn State responded with two first-quarter touchdowns, then added a field goal early in the second quarter to go up 17-3. A nine-yard touchdown pass from Iowa quarterback Spencer Petras to wide receiver Charlie Jones brought the Hawkeyes to within seven points. Penn State went up 10 points in the third quarter, but Iowa scored the final 13 points of the game.

Iowa won despite trailing by double-digits for the first time in its last 18 games.

Iowa improves to 6-0 on the season and 3-0 against Big Ten opponents. The Hawkeyes have won 12 straight games dating back to last season.

This was Iowa’s third win against a ranked team this season. The Hawkeyes defeated No. 17 Indiana in the season-opener and No. 9 Iowa State in Week 2.

Penn State had a first-and-10 at its own 25 with 8:08 remaining in the fourth quarter. After a false start, three minimal plays, and a chop block, the Nittany Lions were forced to punt from their end zone.

The next play after the punt, Petras faked a handoff to running back Tyler Goodson, and found Ragaini wide open crossing the field. Petras hit Ragaini for a game-winning 44-yard touchdown with 6:26 remaining in the game.

Penn State turned the ball over on downs the next possession.

After getting up and celebrating briefly, Moss went down to the turf in pain and had to be helped off the field with an injury. Moss did not return to the game and his status going forward is uncertain. Ferentz said after the game he will know about Moss’ injury on Sunday, but the team is optimistic.

Iowa is back in Kinnick Stadium next week for a sold-out Homecoming matchup against Purdue (3-2, 1-1). The game is scheduled to kick off at 2:30 p.m. and will air on ABC.