DI staff members picked the No. 4 Penn State vs. No. 3 Iowa game, as well as four other contests from the sixth week of the season. 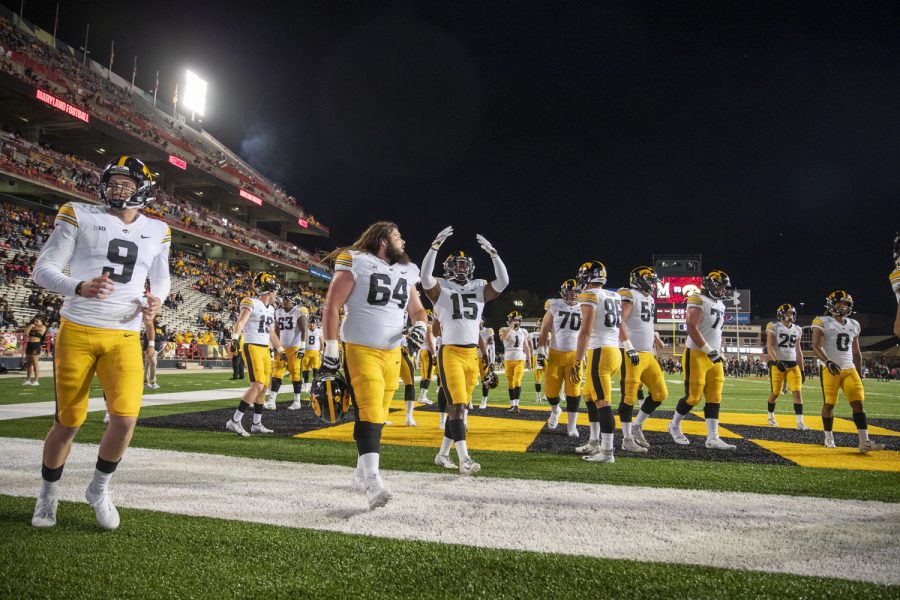 Iowa players begin to warmup during a football game between Iowa and Maryland at Maryland Stadium on Friday, Oct. 1, 2021.The Hawkeyes defeated the Terrapins 51-14. (Jerod Ringwald/The Daily Iowan)

Hanson: Texas — I don’t think Oklahoma is good this year.

Bohnenkamp: Oklahoma — Well, College GameDay is going to be there.

Brummond: Oklahoma — This is the fourth-best SEC game Saturday.
No. 13 Arkansas vs. No. 17 Ole Miss
Read: Ole Miss — Do Razorbacks like popcorn?

Cook: Ole Miss — Gotta go with the Rebels on this one.

Brummond: Ole Miss  — Get your popcorn ready.
Virginia vs. Louisville
Read: Louisville — I’m not watching this game, and you aren’t either.

Peterson: USC — I have no confidence in any of my picks.

Cook: USC — I’m picking USC even though I’ve always been a UCLA girl.

Bohnenkamp: USC — The Pac-12 South is a bit mediocre.

Brummond: USC — Utah will still have a better week than its former coach.