The Hawkeyes are staying focused on preparation before they take on the Nittany Lions Saturday. 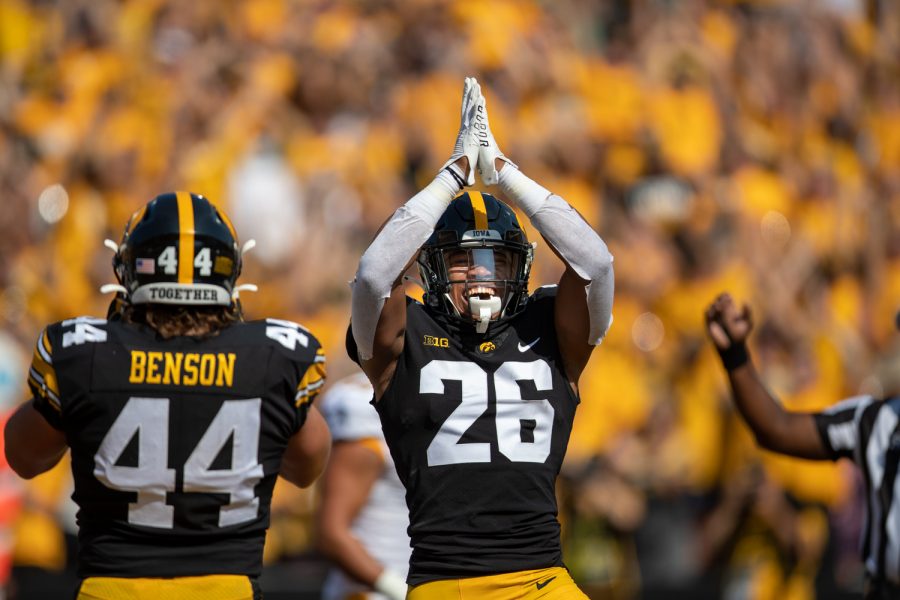 When the No. 3 Hawkeyes welcome the No. 4 Nittany Lions Saturday, there will be nothing left to do but play football.

Four quarters, two halves, 60 minutes — the same as any other college football game. But this is anything but just another game. Saturday’s contest is the first meeting between top-five teams at Kinnick Stadium since 1985.

And Iowa players are trying their best to keep the preparation that way too, stressing the message of treating this week the same as any other, not making it bigger than it is. Junior defensive back Kaevon Merriweather predicted an ugly outcome if he and his teammates allow the outside noise to affect their preparation this week.

“It’s really not too difficult to kind of block out the noise, kind of not be too excited,” Merriweather said. “I understand if I’m not really prepared for the game, then that excitement is going to go down the drain when we get destroyed by like 30 points.”

Players have made it a point to try and stay away from social media in the lead-up to the highly-anticipated matchup.

Each week, quarterback Spencer Petras stays away from all social media platforms and even resorts to simply “liking” text messages he receives.

“I think the biggest thing is social media,” Petras said. “I stay off Twitter and Instagram, I try to limit it with text messages, I’ll just, you know, maybe just like the text or something like that… Just about managing and protecting my focus and my energy…  In a game like this, the buzz and everything can be a little overwhelming if you let it. It’s important to just protect that as much as you can.”

Junior tight end Sam LaPorta noted that the fans and media members creating the hype around the top-5 showdown are not the ones who have earned the right to play in this game.

LaPorta said it’s important to realize that the players and coaches realize all the hard work that has allowed them to play in a game of this magnitude, and to not squander all of that dedication by listening to what outsiders are saying about them.

“I think it’s important to focus on the opportunity that we have, and the fact that we’ve been the ones working since January for this big opportunity,” LaPorta said. “We’ve earned it at the end of the day, the people in this building, not the campus, not, you know, not our families and things like that. We, the coaching staff, the people in this building, we’ve earned this opportunity and I think it’s important to understand that we deserve this and we’re going to try our very best to go out there and win on Saturday.”

Junior defensive lineman John Waggoner summed it up, noting the hype means nothing unless the Hawkeyes win Saturday — teams aren’t judged by how much hype they generate but simply how they perform on game day.

“You can’t really listen to that stuff,” Waggoner said. “Everyone’s telling you how good you are, but, at the end of the day, you’re only as good as how you play.”

Iowa’s matchup with the Nittany Lions is scheduled for 3:05 p.m. and will air on FOX.