Cancer survivor Kale Schmidt taking on Kinnick with the Hawkeyes 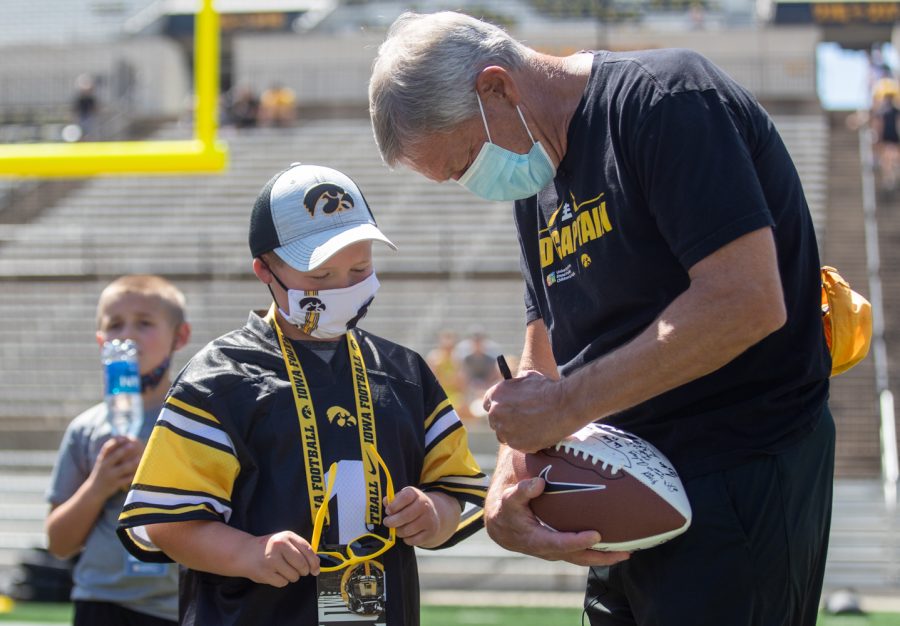 When Kale Schmidt was going through chemotherapy five years ago at the Stead Family Children’s Hospital, he and his family would look out over the field at Kinnick Stadium during home games. Kale wanted to join the Kid Captains out on the field.

“We would go out there during home games, when he was feeling up to it, and watch and he could see the Kid Captains on the Jumbotron, and he would always say, ‘They look like they’re having fun,’” his mother, Erica Schmidt, said.

Kale, now 11, is celebrating five years cancer-free and getting ready to cheer on the Hawkeyes as Kid Captain when they take on Penn State Saturday.

The sixth-grader was diagnosed with a bilateral Wilms tumor, a form of kidney cancer, the summer before he entered kindergarten in 2015.

“When he was first diagnosed, it was really like a kick to the face or the gut, because he was a healthy little boy that didn’t miss one day of 4-year-old pre-school,” Erica said. “He had perfect attendance, then that summer he got sick. Having two other little ones at home made it hard — we missed a lot of milestones.”

He was later diagnosed with Burkitt’s Lymphoma and stayed in Stead Family Children’s Hospital through April 2016 — and finished chemo treatment in June of that year.

Erica said the staff and the hospital were supportive during the family’s long inpatient stay.

“They became family,” Erica said. “They were there for me. I have friends and family outside of the hospital, but at two in the morning, when I couldn’t sleep, I was able to go talk to the nurses as if they were my husbands, my friends, whoever.”

Erica began nominating Kale to be a Kid Captain in 2016, and he was finally selected in 2020 — but COVID-19 forced the postponement of the season.

Because COVID-19 made the season uncertain, Kale’s parents decided to keep the fact that he had been nominated for Kid Captain a surprise until they were headed to Iowa City to do a photoshoot for the Kid Captains.

“We did not tell him what we were doing until we were in the car driving out for it,” Erica said. “We told him it was just an appointment to get us ready for his five-year scan, and when he saw what it was, his face kind of lit up and was like, ‘Is this for real?’”

Kale spends his time outside of school helping on his family’s farm in Goose Lake, Iowa. He also raises pigs.

“When they’re babies, I get to know them, and I work with them and show them,” he said.

He said he’s excited to be a Kid Captain and is looking forward to talking with offensive lineman Luke Empen, who is also from Goose Lake.

Erica said she appreciates the time Hawkeye athletes spend interacting with the children at Stead.

“It’s not something they’re required to do, but it’s something they do,” she said. “The smiles and the laughter that happen when the players would come in and visit all the kids on the floor was really neat to see.”