Around the Big Ten: Matchups, Power Rankings for Week 6 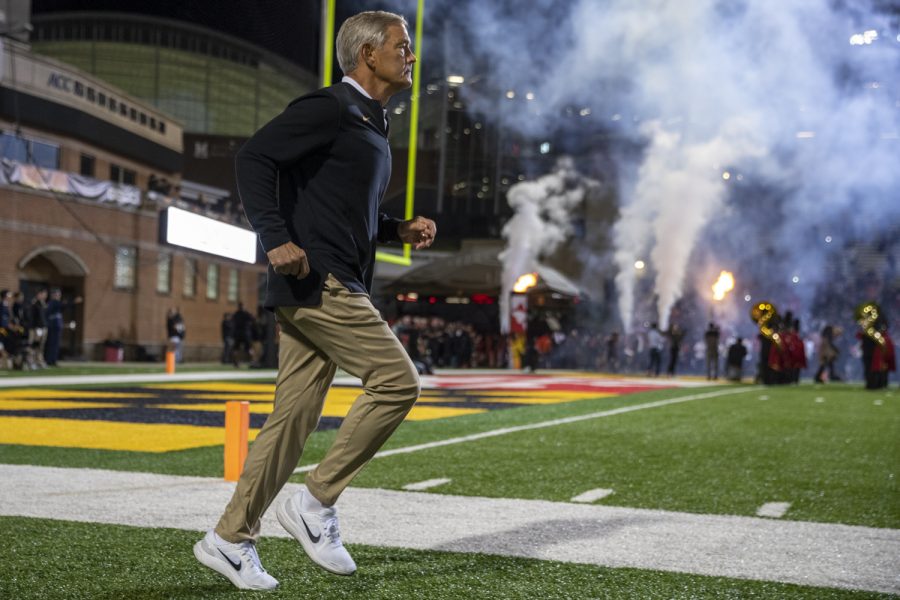 Iowa head coach Kirk Ferentz enters the field during a football game between Iowa and Maryland at Maryland Stadium on Friday, Oct. 1, 2021. The Hawkeyes defeated the Terrapins 51-14.

Ahead of No. 3  Iowa football vs. No. 4 Penn State this Saturday, The Daily Iowan’s Assistant Sports Editor Chloe Peterson ranked all 14 Big Ten football teams and previewed every Week 6 conference contest in Around the Big Ten.

Here are the full rankings, along with start times and betting information for every game.

Iowa — The Hawkeyes are back on top.
Penn State — Could be No. 1, but we’ll see on Saturday at Kinnick.
Ohio State —  The loss to Oregon is looking even worse now.
Michigan — The Wolverines beat Wisconsin last week (although that’s not much of an accomplishment anymore.)
Michigan State — Despite the Spartans being ranked, I’m indifferent about them.
Maryland — A quick six interceptions means No. 6 in the Big Ten rankings
Minnesota — The boat is righting itself, but the Gophers still aren’t good.
Purdue — Purdue isn’t a football or a basketball school. It’s an engineering school.
Rutgers — Rutgers is good at women’s basketball and not much else.
Nebraska — Wow, not last!
Indiana — Before playing Penn State last week, Indiana hadn’t been shut out since Oct. 14, 2000. That’s before I was even born.
Illinois — The Illini have wins over Nebraska and the Charlotte 49ers. Not a great resume.
Wisconsin — It’s time for Danny Vanden Boom.
Northwestern — Remember when the Wildcats were actually good? Me neither.

Is another six-pick night in store for the Terrapins? Probably not, but we’ll have to find out.

No. 11 Michigan State vs. Rutgers

Who let Rutgers into this conference in the first place?

I picked Wisconsin to win the Big Ten West this year. Now, I don’t even know if the Badgers can beat Illinois.

This should’ve been a night game, but it’s fine. We’re fine.

No. 9 Michigan vs. Nebraska

Nebraska got a night game before Iowa did. That’s messed up right there.