Faced with a surplus of around $200,000 attributed by leadership to the COVID-19 pandemic, USG is exploring one-time projects to improve the student experience. 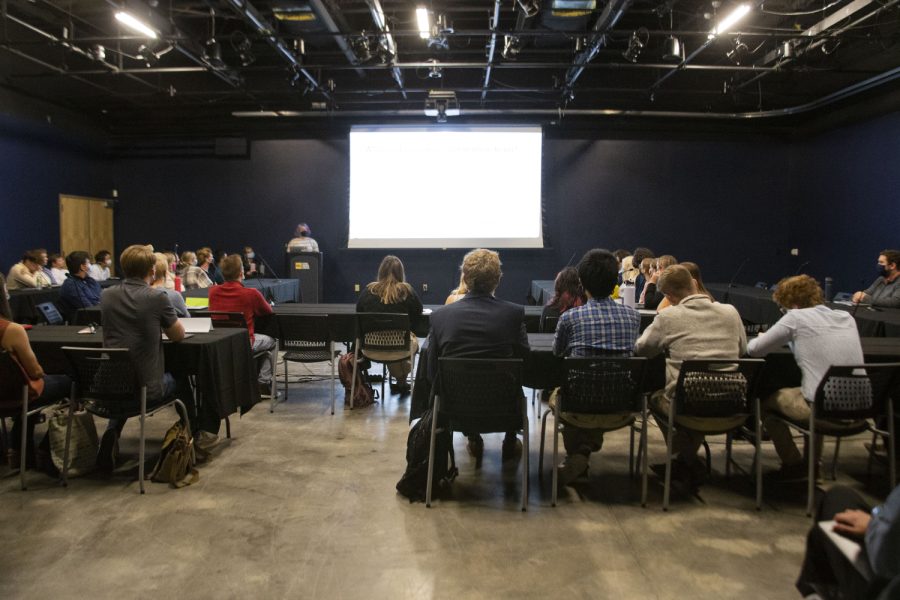 The University of Iowa Undergraduate Student Government has a surplus of money to allocate to projects and student organizations after not distributing much of the funds presented to them since the beginning of the pandemic.

The money given to USG is collected through the $73 activity fee every year and split between the undergraduate and graduate-professional student governments.

USG President Regan Smock said that the split gives 78 percent of the money to the undergraduate student government, which is based on enrollment. She said the money that is not allocated before the end of the fiscal year is placed into the contingency fund.

“We’re excited to have extra money,” Smock said. “But, we run into the problem of, ‘that money is never coming back,’ so we have to find one-time projects or support that help students.”

USG bylaws put the ceiling of the contingency fund at $120,000, and the bylaws say USG should attempt to spend any money beyond that.

Smock said the contingency fund is around $200,000 this year. Smock said there has been a contingency spend-down plan developed by USG to get under the ceiling by the end of the fiscal year.

“When I first saw that number, I’m not going to lie, I was intimidated, mostly because I had never spent money in student government,” Smock said. “It’s been really fun to think of one-time projects.”

Smock said the money will be used on projects like setting up facilities for e-sports, working with UI Gardeners to set up more gardening space, and getting first-generation students graduation cords.

Smock said the money going unallocated to students and their organizations, and ultimately ending up in the contingency fund could not be avoided as a result of the pandemic.

“I think that, truthfully, student orgs didn’t request as much money because they couldn’t have an event, they couldn’t travel, everything was on Zoom,” Smock said. “I think it was almost entirely because of COVID-19.”

Smock said this massive amount of contingency money won’t be a trend as students are able to return to their student organizations in-person.

“From what I’ve seen participation-wise this year, I think students are so excited to be back, so excited to be in an org, excited to have an event, excited to travel,” Smock said. “I hope that money, not the contingency, but the regular allocations money, will go quickly.”

The USG Finance Committee Chair Emily Hagedorn said that the lack of funding going to programs like Dance Marathon out of the finance committee’s account last year resulted in the surplus amount of money in the contingency fund.

She said USG’s contingency fund spenddown plan will collaborate with other groups throughout the university to consider where funding should go.

“We have a contingency spenddown plan that was approved by the student activity fee committee,” Hagedorn said. “We have a variety of projects [and] collaborations with the Dean’s office and the Vice President of Student Life’s office.”

The contingency money is the result of the finance committee not meeting their bi-weekly allocation goal, which Hagedorn said was around $11,500 last year. Hagedorn said that while this money was not being allocated to student organizations last year, there were expenditures on other things.

USG Director of Finance Patrick Johnson said any amount of money that is unallocated at the end of the fiscal year goes into the contingency, which is usually not a large amount.

Johnson also attributes the surplus in the contingency to the pandemic.

“In a typical year, most of the funds allocated to the finance committee are spent throughout the entire year,” Johnson said. “We have a lot of student org requests, we have a lot of events going on on-campus that we like to fund from [the finance committee’s] account. However, last year, because of COVID, there was both too many restrictions and just not enough demand.”

Johnson said this surplus of money for this fiscal year can actually be beneficial, as USG is able to coordinate with their campus partners on one-time projects that will benefit students across campus.

“I have told a lot of people in the USG leadership and with our campus partners that this is a good problem to have,” Johnson said. “I’d much rather have too much money than no money at all, because having too much money means that we can really focus on bettering the student experience, … improving the student lives and the services we provide to students.”