The Johnson County Republicans met in Coralville on Tuesday to encourage party members to strengthen the young Republican vote in Iowa. 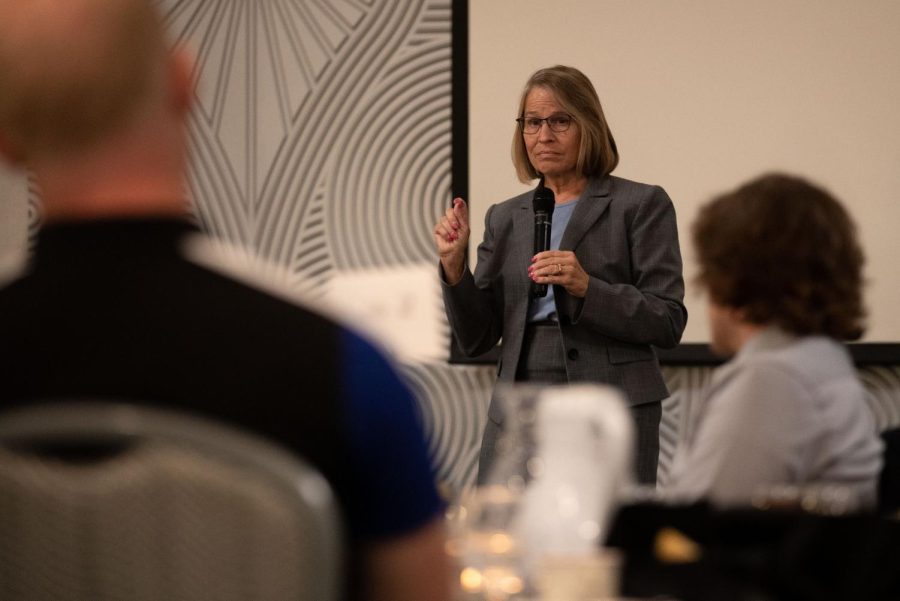 The Johnson County Republicans met in Coralville on Tuesday to encourage party members to strengthen the young Republican vote in Iowa.

Along with the usual priorities of rallying Republican Iowans together and increasing the number of red seats in the Iowa Statehouse, speakers at the event highlighted the importance of young Republicans in the Johnson County community.

Iowa State Republican Party Chair Jeff Kaufmann said one of the party’s biggest priorities of the 2022 election — and the year leading up to it — is activating young people to be engaged in the Republican party.

Kaufmann said especially in Johnson County, the Democratic party has previously done a better job at getting younger voters involved. But, he said, he hopes the Republican party will catch up.

Rep. Mariannette Miller-Meeks, who represents Iowa’s 2nd Congressional District, said the Democratic party looks for identities to put into office rather than looking at character.

The Republican party, she said, seated U.S. congresspeople with robust resumes no matter their identity.

“We have … the most diverse freshmen class in the GOP in decades, whether they’re young, Hispanic, Iranian American, African American, Korean American. And it’s not identity. It’s not the same thing as the Democrats,” Miller-Meeks said.

In attendance were members of the University of Iowa College Republicans and Iowa Young Republicans.

Members of the UI College Republicans refused to speak with The Daily Iowan when approached for an interview at the event.

Eastern Iowa Young Republicans chair Victoria Freese told the DI it’s important for the Republican party to invest in its younger voters because they are the future of the party.

Freese, a 30-year-old Cedar Rapids resident, said groups and organizations like the UI College Republicans and Students for Trump are extremely important to the party.

She said it’s important for the young Republicans to get involved in the party to stand up for their priorities, ones that she feels some of her peers may not be concerned about.

“I mean, we’re the next generation. Who’s gonna fight for our freedoms and our liberties, and our own understanding of individual responsibilities?” Freese said. “We have to stand up for them. And if we don’t then they’re not going to stick around.”

Lt. Gov. Adam Gregg — the state’s first millennial Lt. Governor — said he encourages more young people to use their energy and optimism to run for positions of office or authority in the party.

Gregg said Iowa gives young Republicans  a chance to be more influential in politics rather than in places like New York City or Chicago, where their voices may be drowned out.

“They have opinions. They have, and they should have, a say on what the future of this state looks like, and what the future of each of their communities look like,” Gregg said. “They are going to be here for the next three, four, five, six decades, and they ought to have an opportunity to shape that.”