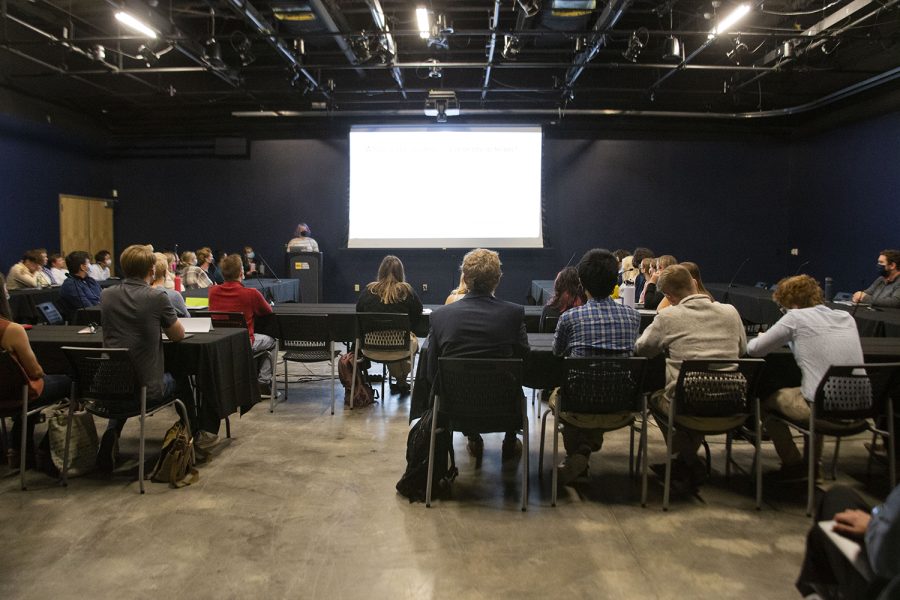 The University of Iowa Undergraduate Student Government appointed USG Speaker of the Senate Jack Lauer to the Vice President position in an interim role on Tuesday evening.

The position shift came after José Muñiz Jr. resigned in late September. Muñiz Jr. did not respond to The Daily Iowan’s request for comment following his resignation.

USG President Regan Smock announced Lauer’s promotion during Tuesday’s meeting. In an interview with the DI, Lauer, a UI third-year, said their new position as interim vice president provides an opportunity to continue advocating for the needs of students.

“Honestly, I am just so excited to help in whatever position I can,” Lauer said. “I’m excited to make sure that students who are not typically involved in conversations can see themselves as agents of change at the University of Iowa. I think that this interim position will allow me to do that.”

Lauer’s appointment gives them the full responsibilities of the position of vice president, and their appointment comes at the recommendation of the USG Internal Affairs Committee.

Lauer said the committee interpreted the bylaws and determined that the position should be filled on an interim basis until Smock can appoint a permanent person for the position.

Lauer, who transitioned from the legislative branch of USG to its executive branch over the past week, said their prior experience in the student organization will help them succeed in the interim position.

“As speaker, and in my previous role as just a senator in USG, I really have been trying to see in what ways can I lend support to other folks,” Lauer said.

Lauer is a member of the Honors Program and formerly served as a UI Museums Docent. They are also a resident assistant in Daum Residence Hall.

Smock said it made sense for her to appoint the Speaker of the Senate, and the Internal Affairs Committee believed this was the correct decision. Smock said the committee chose not to appoint someone because the student body trusted her and elected her as president.

Smock said the Internal Affairs Committee set a deadline of Dec. 18 for her to officially appoint a permanent person to take on the vice president role.

“I’m really excited to have [them] be the support [for me],” Smock said. “I think that knowing if something falls through the cracks, there’s someone there, has taken a lot of weight off my shoulders. We have a great relationship and I trust [them] so much.”

Lauer said they hope to support not only Smock, but also all other members of the legislative and executive branch in their new role. They said supporting the undergraduate student body is also a top priority.

“All of our processes can’t really be divided between branches,” Lauer said. “It’s all interconnected, we’re all a team, and we all look out for each other.”