The Iowa City Pride Festival returned to the streets of Downtown Iowa City this weekend. Beyond celebrating the return of the festival, 2021 marked the 50th anniversary of Iowa City Pride. 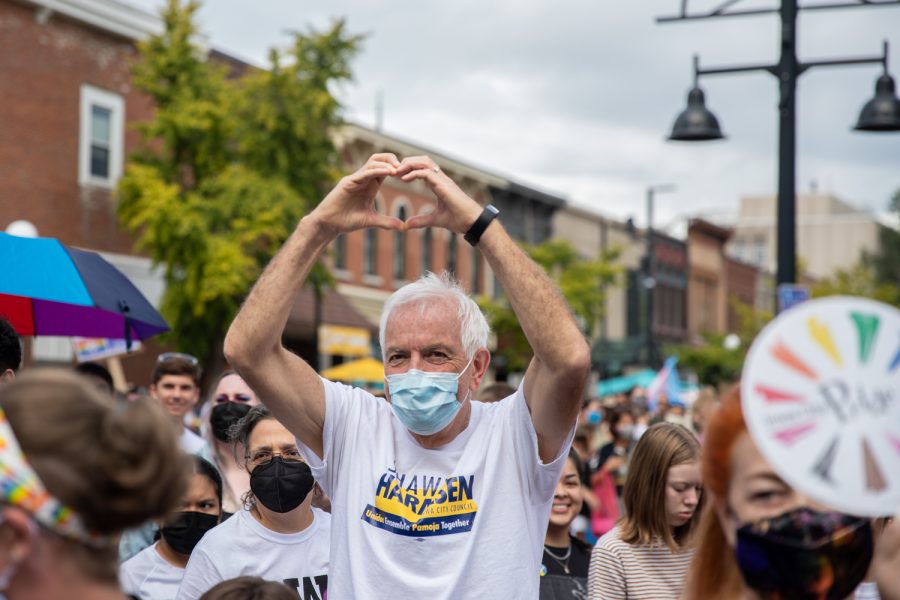 An attendee holds up their hands in the shape of a heart during the Unity March held by Iowa City Pride that began at College Green Park and ended in downtown Iowa City on Saturday, Oct. 2, 2021. Iowa City Pride decided to change this event from a parade to a march this year to show the community fighting for equal rights together.

The Iowa City Pride festival returned this weekend after being canceled and postponed for more than a year because of the pandemic.

The last time Iowa City celebrated Pride was in 2019. This year, masks were seen throughout the festival.

“Seeing things start to open back up and seeing increased vaccination rates and events starting to be a little safer to attend means we’re closing in on the end of this thing, this pandemic,” said Claire Czerwionka, founder of Iowa City Queer Exchange.

By having Pride in October, more University of Iowa students were able to participate and enjoy the festival, Iowa City Mayor Bruce Teague said.

“I’m so happy that so many people came out to celebrate. Those that are queer and also the allies that came out,” Teague said.

Pride was first celebrated in Iowa City in the 1970s when LGBTQ UI students marched in the Homecoming Parade.

“I’m just super proud that Iowa City continues to be leading the charge in the state where so many people are just really supportive and allowing and accepting us to be ourselves,” Teague said.

A common theme echoed by people at Pride was that Pride means inclusion and safety.

“Pride, to me, means being accepted,” Cole Eckhardt, a senior at  Kirkwood Community College, said, “having a community of people who support you and back you [up] when a lot of the world doesn’t.”

The First Mennonite Church of Iowa City attended the festival for the first time. The church’s website says it is inviting to everyone, including the LGBTQ community.

“We want to support the LGBTQ+ community — let them know that God loves them, and that we are really sorry for the way our churches responded to [them]. We are just thrilled to be here,” First Mennonite Church Pastor Terry Zimmerly said.

Teague observed that this year he saw a lot of young people with their parents, which he sees considers a signal that times are changing.

“I’m so happy to see the young people and the many young people with their parents, and that just lets me know that the day when I grew up when you know coming out was coming out amongst certain people here in our community is coming out and just being yourself to all people,” Teague said.

Czerwionka, who is from Chicago, said LGBTQ+ people are scattered around the windy city, which is different than Iowa City.

“Iowa City is a little more, it’s more integrated, simply because it’s a smaller community,” Czerwionka said. “I think we all kind of hang out together and go to the same events and know one another, and it isn’t as it isn’t as siloed and separate.”