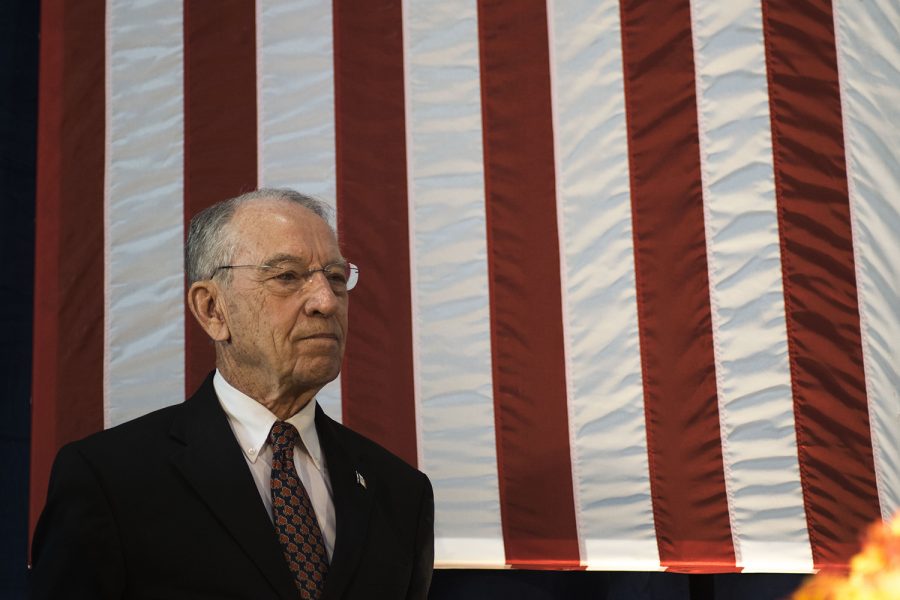 Chuck Grassley stands on stage at the Second Annual Harvest Festival on Saturday, October 13, 2018. The event was a fundraiser for current governor Kim Reynolds.

The Daily Iowan has compiled data and facts about the senator to visualize the 63 years of his political career.

Sen. Chuck Grassley announced his reelection campaign last week. He is seeking his eighth term in the U.S. as the second oldest current senator, and one of the longest-serving senators in U.S. History.

Grassley is the longest-serving U.S. senator in Iowa’s history. Of currently seated senators, he’s been serving the second longest, and the ninth longest serving in U.S. history. At 88, Grassley is a few months younger than Sen. Dianne Feinstein, D-California, the oldest current senator.

During his time in the U.S. Senate, Grassley has worked under eight presidents and alongside three other U.S. senators including Republican Roger Jepsen, Democrat Tom Harkin, and current junior senator, Republican Joni Ernst.

Crime and law enforcement, health, taxes, government operations, education, immigration, commerce, and families are the issues that Grassley has focused on most during his time in the senate. The following graphic is made from data of all of the bills he has sponsored or cosponsored.

Sen. Grassley is known for his outlandish and shorthanded tweets. With over 10,000 tweets and 13 years on the social media platform under his belt, the senator uses the platform nearly daily to communicate with his constituents and others. Some of his most commonly used words in his tweets include Iowa, Senate, Trump, and Iowans.

Grassley’s most retweeted and liked tweets gained traction because of his comments made toward President Joe Biden’s actions toward vaccines, immigration, and riot violence.

Can’t fly into USA w/o showing negative test for virus but Pres Biden will let ppl who illegally walked across the border do so w/o testing. Is that protecting our citizens?

The 2022 Midterm Elections will be held on Nov. 8, 2022, and Grassley will see his name on the ballot for the nineteenth time.