Tuesday’s resolutions call for all students, staff, and faculty to show proof of vaccination before being allowed to enter University of Iowa buildings, while the Juneteenth legislation urges the state Board of Regents to make the federal holiday a university one. 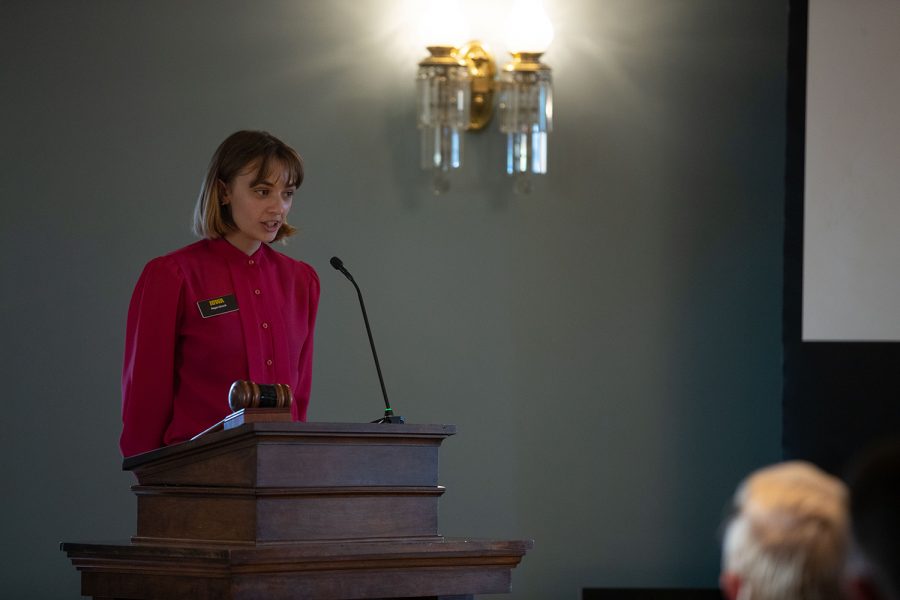 The resolutions urge the state Board of Regents and the state of Iowa to adopt Juneteenth as a university holiday, require proof of vaccination status to go into campus facilities, and distribute booster shots of Pfizer’s COVID-19 vaccine on campus.

The vaccine resolution, advocates for policies requiring students, staff, and faculty to show proof of vaccination or an “allowable exemption” to enter UI buildings. It was authored by two delegates from GPSG, Frank Boksa and Kael Hoflen, and two USG Senators, Joshua Brown and Omar Mustafa.

The resolution passed easily, but not with unanimous approval. A few senators, who were among the only members in the room who were not wearing masks, voted no.

One of the co-authors, USG Senator Joshua Brown, said the regents should consider the connection between the UI and the greater-Iowa City community — an idea brought up by President Barbara Wilson during her address earlier in the evening.

By mandating vaccinations, Brown said the university can alter the course of the pandemic in Johnson County.

“There is an unprecedented rise in hospitalizations due to COVID-19, and as an aspiring public health professional, it is distressing to me to see that our Board of Regents has not supported public health [guidance],” Brown said. “We as student leaders cannot alone, combat this pandemic.”

Another resolution passed calling on the regents to pass legislation establishing Juneteenth as a university holiday on Tuesday. The bill was authored by Hoflen and USG Sens. Nick Nachtman and Prakruti Pancholi.

Nachtman, who is the USG Justice and Equity Committee Chair, said the resolution follows the federal government’s decision to pass a bill making Juneteenth a national holiday.

Juneteenth falls on June 19, and is a commemoration of the day when enslaved people in Texas learned about the Emancipation Proclamation — Texas was the last state in the country to receive this news.

As previously reported by The Daily Iowan, student representatives from the UI, Iowa State University, and the University of Northern Iowa sent a letter to the regents on Aug. 19 requesting Juneteenth be a holiday across all three campuses.

“We are passing this legislation because we believe that it is important for the University of Iowa and the state of Iowa to recognize this holiday and the impact that these events have had on our community,” Nachtman said.

Pancholi said Juneteenth should hold all the rights that other university holidays hold, including time off from school.

“We realize that diversity, equity, and inclusion is not done by recognizing Juneteenth as a holiday, but this is a good step … for us to take as we move in the right direction,” she said. “With that said, we do pledge to keep working with campus partners and everyone in this room to keep making the university an equitable place for everyone.”