The rest of the crosswalks on campus count down, except for the busiest crosswalk. 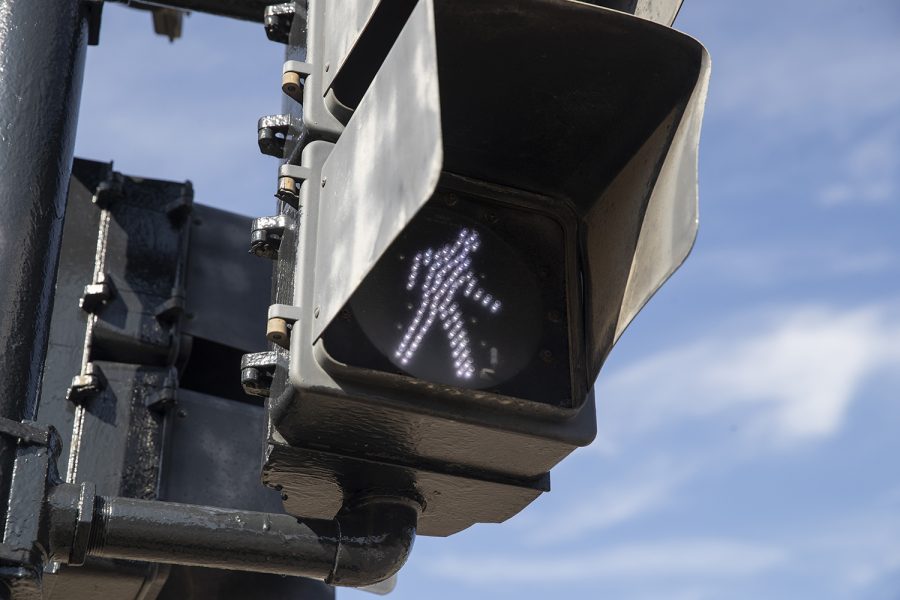 “Wait,” the automated voice from the crosswalk button declares.

My friends laugh and repeatedly press the button until it says: “Burlington, walk sign is on to cross Burlington.” The crosswalk light across the street turns from the red hand to the little white “walk” figure.

The crosswalk that separates East and West Market street has a yellow pedestrian sign that blinks continuously to aid both the line of cars and the swarm of students that appear when class lets out.

Meanwhile, students crowd around the intersection of West Iowa Ave and Madison Street, waiting impatiently as the cars all get a turn to move ahead before all crosswalk lights blink on the walking sign. But the long awaited white figure never sticks around — I personally have counted two seconds before the figure is replaced by a blinking red hand.

The hand blinks for 30 seconds, but it is always unknown as to how much time is left. This forces students to rush in mass clusters across the crosswalk, some struggling behind the crowd, others debating on one end of the crosswalk whether or not to risk crossing the street.

This intersection needs to change. Not just for the well-being of students, but for drivers as well. Cautious first-years and flippant fifth-years alike take chances and sprint across the crosswalks because they are running between classes and the nearly five-minute wait is too long for them to make it up to Van Allen from the English-Philosophy Building in the short 15 minutes they often have to travel.

The crosswalk needs both a visible countdown and a speaking button to improve the busy thoroughfare.

Katey Peters, a fourth-year student, has faced the Iowa Avenue and Madison Street intersection countless times during her college career.

“The amount of times I’ve gotten stuck at that crosswalk is beyond irritating,” she said at the crosswalk while waiting for the light to change. “Half the time I could have made it across, but I don’t go because I have no idea how much time I have left. I don’t want to be late for my class, but I also don’t want to be hit by a car.”

What causes most of the confusion at the crosswalk is the lack of a visible countdown, like many other crosswalks have. Instead of telling pedestrians exactly how much time they have left, students scurrying from one class to the next have to make a split-second choice whether or not to sprint across the road. Some may not have the means to make that decision and are always stuck.

Autumn Johnson, also a fourth-year, said the lack of a countdown is frustrating.

“I hate the blinking hand. Why can’t they all have numbers counting down?” she said. “It’s very dumb because if you don’t actually see it go white to blinking you have no idea if you’ll make it across in time.”

Another possible way to improve the intersection is to have students cross with the traffic, instead of having each direction of traffic have its turn for about five minutes before letting students cross for barely a minute. Before COVID-19 recommendations encouraged social distancing, the crowd of students was still unsafe near the busy intersection. Currently, masses of students are cramped at the intersection, almost shoulder to shoulder.

Please, for the sake of student safety, change the light system.