A union representing bus drivers in the Iowa City Community School District is asking for 25 percent hazard pay from last year and this year moving forward because of the hazardous conditions they’ve been working in. 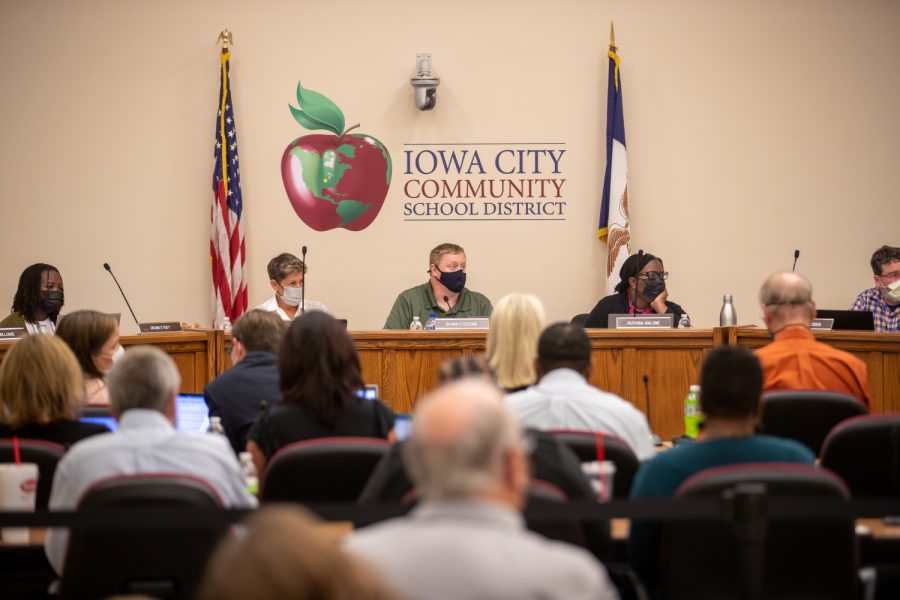 Members of Teamsters 238, a union representing bus drivers in the Iowa City Community School District, are asking for a 25-percent pay increase as hazard pay  — additional income given for working in hazardous conditions.

Five members of Teamsters requested the pay at the ICCSD school board meeting Tuesday night. Iowa City School Bus Driver Theresa Seeberger told the board that bus drivers, like health care workers, are an essential workforce who should receive some of the federal money given to the school district to provide hazard pay for essential workers.

“People don’t know about us or think about us, but we do the very essential job of transporting all these children to get to school, so it’s an essential service,” Seeberger said. “As a part of our job, we have to be in a very small bus, sometimes with 50 students, and there’s literally no way to escape from whatever germs may be wandering around.”

There is currently a shortage of bus drivers, Seeberger said, which has led to drivers working late nights on trips. The shortage has caused some of the office staff to have to drive buses as well, who the speakers said also deserve hazard pay because they don’t have their own union.

The job is also a split shift, meaning that drivers have to go to work twice a day, which prevents them from working another job, Seeberger said.

“Additionally, we’re just not paid as well as truck drivers, et cetera,” Seeberger said. “But we’re not transporting furniture or clothing or toilet paper, we’re transporting children. And all the kids running around — it’s stressful to try to make sure I’m safe.”

Audrey Alt, an Iowa City bus monitor, said that she has to work closely with children while on the bus, also in unsafe conditions.

A big reason why drivers are asking for hazard pay is because they do not receive paid time off, sick days, or comprehensive health care, Alt said.

“I don’t know how many of you have actually been in the schools lately, but as much problems as they have getting kids to wear masks, try being on a bus,” she said. “It’s really impossible, because they think they’re done with school, so they want to take it off.”

Drivers are asking for hazard pay from last year and this year moving forward, she said.

Iowa City School Bus Driver Dan Ramsey also emphasized to the board that bus drivers are essential workers because in districts around the country that don’t have enough drivers, kids are arriving at school two to three hours late, and getting home at 7 or 8 p.m.

Drivers have to drive one set of kids home, come back to school to pick up another set, and then drive them home, he said. Iowa City and Cedar Rapids have even had to cancel a few trips because of a lack of drivers.

Ramsey said that the district has been unclear about whether or not to enact mask mandates on buses.

“Even though there was a federal mandate on masks on buses, we as bus drivers were instructed not to enforce them,” he said.

Bus driver Rob Alt said that while being a bus driver is a part-time job, it’s a full-time commitment.

“We’re coming to you and asking for hazard pay for honoring our commitment to the young people of this state,” he said. “And it’s something that we’re proud to do. But there are other professions that are receiving pay for the pandemic, and I believe that we are also deserving of that consideration.”

Teamsters 238 Principal Officer Justin Case said that the shortage of school bus drivers is a pandemic of its own. He said the fact that bus drivers work with children, who are largely unvaccinated and may not follow masking instructions, puts them at a high risk for COVID-19 exposure.

“Nobody can argue that school bus drivers aren’t essential, and yet, due to the part-time and switch-shift nature of the job, there are few benefits and few incentives to retain our professional drivers who transport our kids at their own risk,” Case said.