UIHC participated in the second annual NICU read-athon led by Babies with Books. Each patient in the NICU received a copy of “The Very Hungry Caterpillar” by Eric Carle to promote cognitive nutrition. 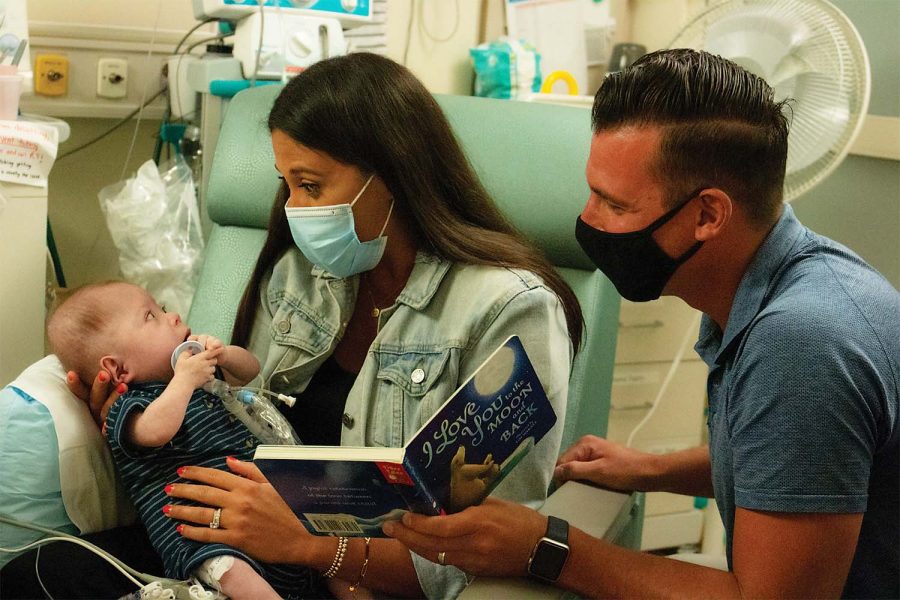 Parents of babies in intensive care are typically restricted to watching from the sidelines. In the Neonatal Intensive Care Unit at the University of Iowa Hospitals and Clinics, however, parents and nurses collaborated to read a childhood classic to improve vocal recognition among their children.

The UIHC Stead Family Children’s Hospital NICU participated in a national read-athon from Sept. 13-23. The NICU promoted reading, especially to premature babies, as a way to encourage voice recognition with parents and brain development at an early age.

Babies with Books, a national youth-led organization bringing early literacy in health care beginning in NICUs, started the national read-athon last year. This year, the organization reached out to UIHC to participate against other NICUs across the country, said Marissa Johnson, nursing clinical practice leader at UIHC.

Johnson said the NICU handed out parent logs and information about the importance of reading to each patient. They tracked each occurrence of reading by recording it on each log, she said.

“Reading while pregnant starts that continuum of reading and promoting literacy,” Johnson said. “If they start while they’re pregnant, they’re probably going after the baby is born.”

The theme book was The Very Hungry Caterpillar by Eric Carle, Johnson said. The NICU’s focus was cognitive nutrition and viewing reading as the food to grow babies’ developing brains, she said.

Each patient in the children’s hospital received a copy of the book, provided by money from the Janice and Bruce Ellig Children’s Library at the hospital.

Stephanie Lee, clinical assistant professor of pediatrics and neonatology at UIHC, said babies start developing hearing around 26 weeks in utero, which is when parents should start reading to their babies.

“When babies are born early, they don’t have that normal exposure to voices and sounds as much,” Lee said. “It’s important to provide those positive sounds so that they can continue to develop their brain circuits just as if they would have if they were not born early.”

Babies have fewer opportunities for brain and language development if they don’t receive these positive sounds, Lee said.

“When there’s no parent present or the baby is not provided with positive sounds, such as reading or singing, there is a negative impact on their trajectory for language and cognitive outcomes in the long-run,” Lee said. “Babies in quiet rooms have worse outcomes than babies who are exposed to voices and good sound.”

Assistant Nurse Manager in mother-baby labor and delivery at UIHC and new mother, Alyssa Shelby, said she started reading to her son Liam to comfort him alongside her husband.

“We read to Liam, especially when he was in isolette before we could hold him when we wanted,” Shelby said. “From the beginning, he knew our voices, so being able to use our voices and read to him was a way to make it feel like I was comforting him.”

“When I would come in the room, he would know I was there when I started talking to him,” Shelby said. “I didn’t expect him to know who I was that fast, so it was special.”

While stressing the importance of reading, it’s important for babies to have that one-on-one interaction rather than watch television, Lee said.

According to the American Academy of Pediatrics, children under two years of age shouldn’t watch any television, which includes YouTube videos.

“In-person reading includes more interaction with the child, which is a give and take interaction,” Lee said. “One-on-one interactions strengthen the relationship between a parent and child that a TV screen can’t replace.”

Although this is the first year UIHC has participated, the NICU hopes to participate in future years to promote reading from an early age, Johnson said.

Johnson said the staff plans to increase participation in years to come, improving outcomes for babies and their development.

“Their brains are growing outside in the environment rather than in utero, so having those cognitive stimuli for the brain is beneficial for growth,” Johnson said. “The more that a baby is exposed to language, it greatly promotes their literacy through kindergarten and beyond.”