A time honored University of Iowa tradition, the homecoming corn monument, is back for the first time since 2019. 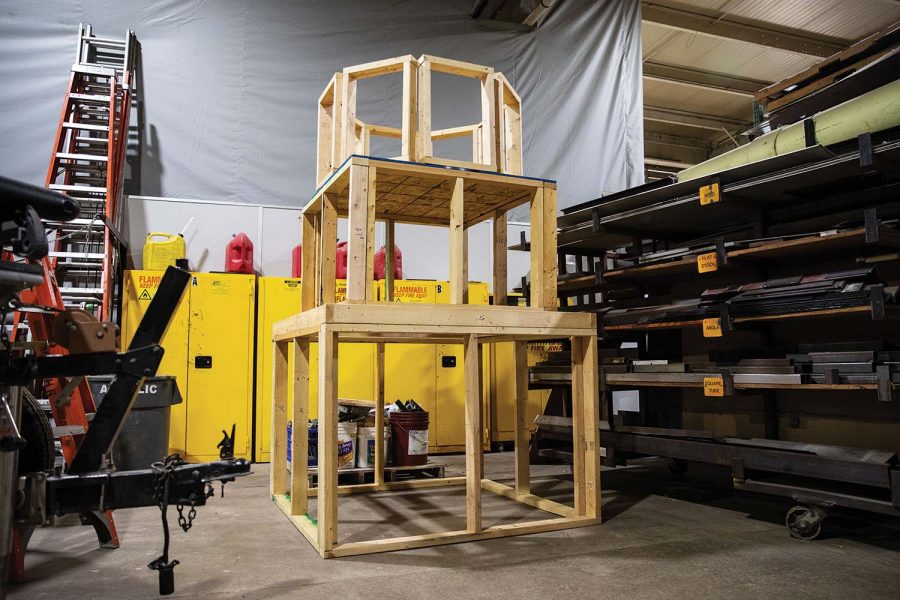 The unfinished American Society of Civil Engineers (ASCE) Corn Monument is seen in the Hydraulics Model Annex on Sunday, Sept. 26, 2021. The Corn Monument is set to be finished on the Sunday following the Iowa football game against Penn State.

The Hawkeyes’ largest corn monument, a model of the Old Capitol building, is well underway to be showcased in time for the 2021 University of Iowa Homecoming Week.

The corn monument has been a staple of Hawkeye pride since its debut about a century ago. As previously reported by The Daily Iowan, there was no corn monument for 2020 because of COVID-19.

At around 25 feet tall, this year’s corn monument will be the largest one in recent history. Monuments are typically between 12 feet and 17 feet.

Margaret Trowbridge, a junior in the UI College of Engineering who designed the monument, said she wasn’t expecting her design to be chosen because of its ambitious nature.

“I didn’t think my design would win because I thought it wouldn’t be the most constructible,” Trowbridge said.

Homecoming week takes place Oct. 11-16, but members of the American Society of Civil Engineers have already begun constructing this year’s corn monument. Building takes place over the course of five Sunday mornings and afternoons before the final unveiling at the Pentacrest.

While it’s called a corn monument, the structure itself is not built with cobs of corn. The monument is primarily constructed out of wood, with kernels of dried feed corn glued to the outer part as decoration.

The monument’s design was chosen from submissions in the “UI Civil Engineering Tools” course, and two captains from the American Society of Civil Engineers are designated to oversee the entire corn monument project. One captain, Cade McNeill, a UI graduate student, said this is his fifth time working on a corn monument.

“There’s a ton of different aspects that go into a lot of the behind-the-scenes work,” McNeill said. “We do things like the Gold Rush campaign that we have for funding of the corn monument.”

Collin Furlong, a UI engineering student, said it is his second year as captain.

“We were given access to all of the class’s designs and told we were allowed to use theirs,” Furlong said. “The whole point of the project was to give us more ideas.”

Trowbridge said her decision to join in on the build was not influenced by the team choosing her design. She said she wanted to experience the Hawkeye tradition for herself, after being unable to participate last year.

The corn for every monument comes from community donations, is inedible, and does not spoil, Trowbridge said.

She added that the corn being used was accumulated over previous years, and the monument requires about two trash bags of corn kernels for construction.

The team will use a forklift to safely transport the monument to the Pentacrest, instead of transporting it via truck, as is tradition, McNeill said.

McNeill said that, while most of the volunteer workers are members of the American Society of Civil Engineers, the project is a collaborative effort between multiple groups, including the Campus Activities Board and Nexus.

He added that volunteers are not expected to have any building experience.

“We love to have as many community partners as we possibly can,” McNeill said. “We tried to get the word out that we continually do this year after year because it’s been a tradition for such a long time.”