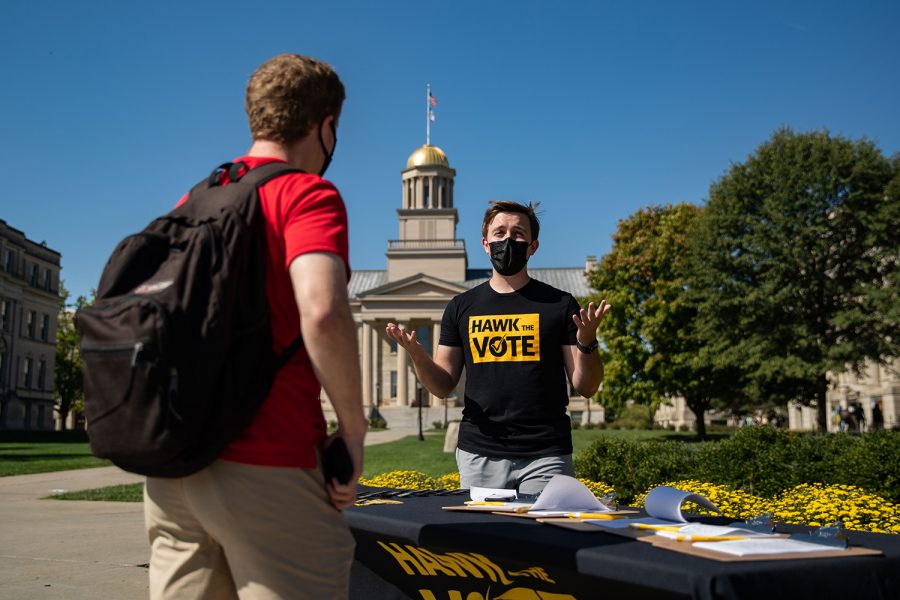 Hawk the Vote executive director Joseph Verry talks to a community member about voter registration on the Pentacrest on Tuesday, Sept. 28, 2021. Hawk the Vote wants to get people registered for the upcoming city council election.

As local elections approach, Hawk the Vote is registering students to vote to emphasize the importance of voting in elections at all levels.

The University of Iowa’s Hawk the Vote student organization registered students to vote on Tuesday — National Voter Registration Day — ahead of the city council, school board, and other local elections in Johnson County, scheduled for Nov. 2.

Hawk the Vote, a nonpartisan organization, provides students with information about elections at the local, state, and federal levels. Programming Director Sierra Wicks said this is especially important for local elections, where students might not have a lot of information about the candidates or know that an election is taking place.

“I think it was really obvious that there was a presidential election,” she said. “I think the city council and school board elections are less obvious, so our goal is just to inform people and make sure they have the education and information to vote in these elections.”

Voter Registration Day falls on the last Tuesday in September. Wicks said it is a day that represents what the organization works toward the entire year.

“While I might think about registering people to vote every day, most people don’t,” Wicks said. “It’s just a good reminder and a way to focus and promote what we do on campus.”

Hawk the Vote set up tables around campus at the Main Library and Pentacrest. Members of the organization guided people through the process of registering to vote or updating their voter registration, Wicks said.

Hawk the Vote Executive Director Joseph Verry said the organization is aiming to break down obstacles that may stand between young people and voting, including having to update their address, because students often move between dorms and apartments on a yearly basis.

Verry said the organization wants to make voting a habit for students while they are in college that will continue after graduation.

Verry added that he believes everyone, from campaign workers to the average voter, is feeling some sort of burnout from last year’s general election. However, he also said voting is a privilege and it is very important to vote on those who influence public policy at all governmental levels.

“Teaching students how to register to vote, find information about how voting works, and all of that kind of stuff is a lifelong skill that we want to provide to students,” Verry said. “It doesn’t matter what year it is, being a part of the elections process is important.”

Even though the upcoming election is only local and comes on the heels of a contentious 2020 general election, Verry said, it is a privilege for all individuals who can vote to use their voices and elect officials that influence the general public.

He said decisions regarding environmental policy are influenced by these city council members as well.

Hawk the Vote Associate Director Kathryn Shumaker said these local elections have the most immediate impact on students despite not being publicized very much at all.

She said the organization is working to change that by collaborating with campus partners, such as the Dean of Students, Undergraduate Student Government, Student Legal Services, who use their social media to change that and better promote local elections and registration, generally.

“We can really work with campus partners and get them excited,” Shumaker said. “People can post on their Instagram [and] just get the word out about voter registration. Being able to reach out to people and communicate with people, I think that makes a big impact.”