MacLean Hall sees first major renovation in over a century

The state Board of Regents approved the University of Iowa's request of $27.9 million to modernize MacLean Hall during its Sept. 16 meeting. 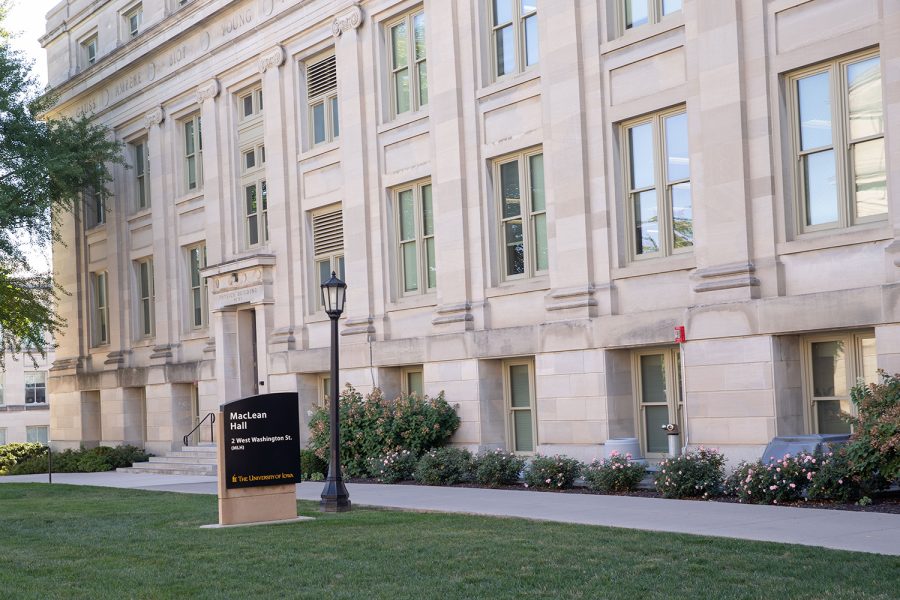 MacLean Hall will receive a major modernization after more than a century to correct fire safety, power wiring, improve accessibility, and provide classroom upgrades to fit campus and industry standards.

The modernization will be the first phase of renovations for the buildings on the Pentacrest, UI Senior Vice President for Finance and Operations Rod Lehnertz wrote in an email to The Daily Iowan.

The regents approved $27.9 million at the Sept. 16 regents meeting for MacLean Hall.

Because the funding being requested would be state money, the UI is awaiting the Iowa Legislature’s approval. Each year, the UI asks the state for funding on certain high-priority projects, wrote Lehnertz.

“The intent is to maximize the use of these special and centrally located buildings for our UI students, and in ways that maximize their success in fields that matter to them and to our state,” Lehnertz wrote, “This project will not only eliminate the deferred maintenance back-log, but it will finally make the building a fitting and modern place for UI students to learn.”

Lehnertz wrote that the computer sciences department and mathematics department, which are housed in MacLean Hall, have growing enrollment.

The UI Lindquist Center for the College of Education is also undergoing renovations that are expected to be completed next month, as previously reported by the DI.

Daniel Clay, dean of the College of Education, told the DI last week that the addition of a cafe and other sharable spaces to the building assists in building a sense of community.

The UI does not yet have a contractor as they are waiting for approval from the Iowa Legislature, Director of UI Campus Planning Joe Bilotta said.

The UI asked if three out of the five Pentacrest buildings could be renovated in 2007, but then the 2008 flood hit, as written in the Five-Year Capital Plan.

In 2019, the request got renewed, but by then there were a lot of maintenance problems and the UI realized that it was time to do renovations, Lehnertz said.

Bilotta said the project is a modernization because the historical value of the buildings will not be changed, but instead renovated. The goal of the project will be to improve student and academic spaces.

“We’re never going to change it because of its historic value, so they’ll always be renovations — or in this case — modernization,” Bilotta said.