The junior accounted for 18 tackles in Iowa's 24-14 win over Colorado State. 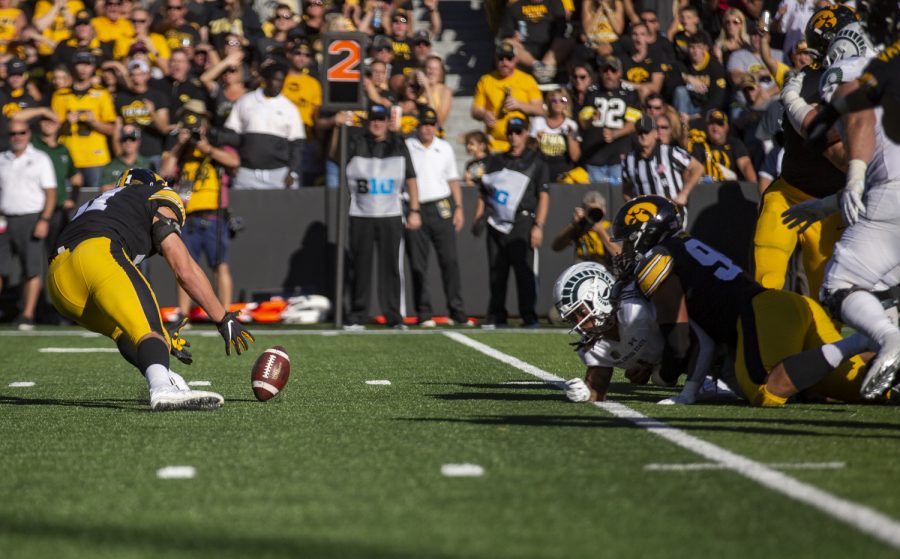 Iowa linebacker Jack Campbell recovers a fumble lost by Colorado State running back A'Jon Vivens during a football game between Iowa and Colorado State at Kinnick Stadium on Saturday, Sept. 25, 2021. The Iowa defense has forced a turnover in every game through four meetings. The Hawkeyes defeated the Rams 24-14.

Iowa junior linebacker Jack Campbell was named Big Ten Defensive Player of the Week on Monday after recording a career-high 18 tackles in the No. 5 Hawkeyes’ 24-14 win over Colorado State.

Campbell also recovered a Colorado State fumble at the Rams’ 6-yard line in the third quarter. Iowa scored on the next play to tie the contest, 14-14. Campbell (6-foot-5, 243-pounds) is from Cedar Falls, Iowa. Against the Rams, he tallied seven solo tackles and 11 assists, and added three pass break-ups to go with his second fumble recovery of the season (touchdown at Iowa State).

Through four games, Campbell leads Iowa’s defense with 43 tackles, including 19 solo stops. He has one forced fumble to go with his two recoveries, three pass break-ups and 1.5 tackles for loss.

Campbell is the third Hawkeye to earn conference accolades this season. Cornerback Riley Moss was named Defensive Player of the Week following Iowa’s 34-6 season-opening win over No. 17 Indiana. Punter Tory Taylor shared the Special Teams Player of the Week honor following his performance in Iowa’s 27-17 win at No. 9 Iowa State in Week 2.

Iowa returns to Big Ten play Friday at Maryland. The game is scheduled to kick off at 7 p.m. (CT) and will air on FS1.