The student organization is collecting cans at Kinnick Stadium after home football games and giving the money they raise back to the Stead Family Children’s Hospital. 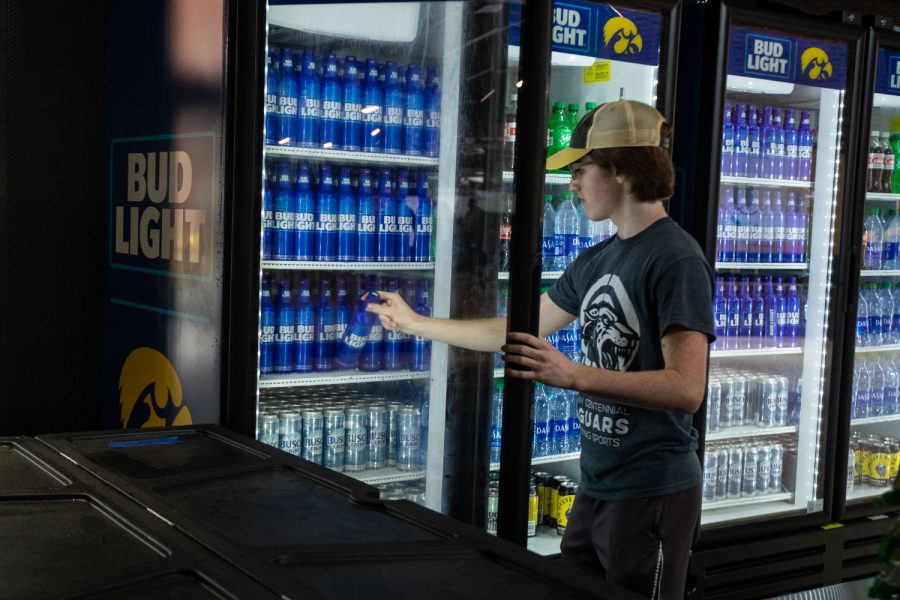 A concession stand attendant serves an alcoholic beverage during a football game between No. 18 Iowa and No. 17 Indiana at Kinnick Stadium on Saturday, Sept. 4, 2021. The Hawkeyes defeated the Hoosiers 34-6. This is the first season Kinnick Stadium has sold alcohol.

In heaven there is no beer — but there are plenty of beer cans littered among the stands of Kinnick Stadium after a game.

University of Iowa Dance Marathon is collecting cans at tailgates and near the stadium as part of a new “Pop Pick Up” program, with funds from the recycled cans going to support pediatric cancer patients at the UI Stead Family Children’s Hospital.

Alcohol is available for purchase at Kinnick Stadium for the first time this season, and the empty cans fans leave behind will also go to Dance Marathon’s can-collecting efforts.

The range of costs that Dance Marathon helps to pay with the money raised depends on the patient, Retikis said.

“We pay for some treatment,” Retikis said. “We pay for gift cards when they’re in the hospital — they have gift cards for things like food and things they need. We actually pay for part of the funeral costs if we do lose a child.”

Throughout the summer and academic year, Dance Marathon members collect donations to participating in the group’s 24-hour “Big Event” in February. Over the years, the organization has raised money through canning prior to the Big Event.

“We go door to door, we do football games, and we ask people for donations, and then that goes directly to our accounts to raise money to get to the big event,” Retikis said.

In addition to the cans volunteers collect, Dance Marathon receives the cans collected inside the stadium. The security team goes around and picks up the cans after games, said Michael Patterson, associate director of facilities for the Athletic Department.

“We’re using our security staff, the [Contemporary Services Corporation], as our security provider at Kinnick Stadium,” Patterson said. “So, we’re using the staff that they hire on game day to actually physically pick the cans up for us right after this game.”

All the cans collected are then placed in a trailer provided by Can Shed, a can recycling agency, Retikis said. There, Dance Marathon members sort through and organize the cans.

“Kinnick has been just as amazing,” Retikis said.

Even though Pop Pick Up is new this year, Beth MacKenzie, program manager with the Office of Sustainability, said there have been similar initiatives in the past. The Delta Tau Delta fraternity put together a game-day recycling program in 2012.

“Essentially, they had people from their fraternity show up on game days for two hours before kickoff, and they would stand at the gates, and we would place recycling bins around the stadium at the gates so that — as people were entering — they could help the attendees sort their materials into the correct bin,” MacKenzie said.

After Delta Tau Delta could no longer host the program because of the amount of manpower it required, the program dissipated, but the base for the work was still there, MacKenzie said.

“It’s one of those things that the pieces were kind of there,” Retikis said. “I just kind of put them together into the program, because there’s so many opportunities with Kinnick and Can Shed and bringing it all together, was how the program was made.”

After the cans are sorted, they are taken away for disposal by Can Shed. The barcodes on the cans are scanned to find the distributor and then recycled, said Troy Willard, Can Shed owner and chief executive officer.

Recycling the cans keeps them out of the landfill but also conserves resources, MacKenzie said.

Dance Marathon gets the full deposit on the can back, Willard said, and Kinnick and the Can Shed don’t take a percentage of the money raised.

“Everything they do, we get back,” Retikis said. “Can Shed — they have given us a 32-foot trailer for free, and hundreds of bags that we use every weekend. It’s been really wonderful, and we get all that money, which is also wonderful.”

The Office of Sustainability has helped promote the program, MacKenzie said.

“We’re doing a lot of social media, sending it out in our newsletter, helping them reach out to different media sources,” MacKenzie said. “We did provide them with some contacts and different media contacts that we have to help them get some word out about the program, and we reached out to student [organizations] that we connect with pretty regularly and sent it their way.”

Any student who helps pick up can receive a free ticket to the game, Retikis said.

There has been discussion of expanding can collection efforts, she added. By expanding to neighborhoods, she said, they can collect from different populations.

“It was so amazing, and the support we’ve gotten, even from tailgaters — they take bags from us now and set them up with their tailgates — but we hope to in the future expand to neighborhood canning efforts,” Retikis said. “Two years from now, I want to see it everywhere.”