Iowa City community brought together with music: Live from the front porch

The Front Porch Music Festival is an annual music event in Iowa City’s Longfellow neighborhood where musicians perform on their front lawns and porches for the community to enjoy. 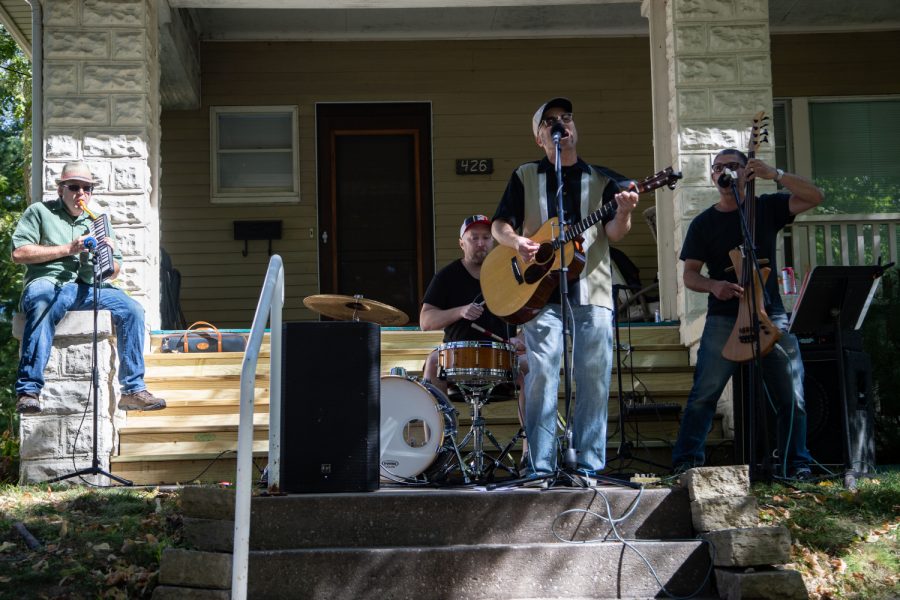 While many students spent their Saturday at Kinnick Stadium for the Colorado State game, those who did not attend may have heard smooth jazz and folk music flowing through the autumn air, or noticed musicians lining the streets of Iowa City’s Longfellow neighborhood for Iowa City’s sixth annual Front Porch Music Festival.

The Front Porch Music Festival gives musicians of any genre, level, or age the opportunity to play on their front lawns, porches, or driveways for community members to watch.

At the event, people riding past on their bikes or walking their dogs stopped to enjoy the music for a while. Ages ranged from toddlers to 80-year-olds, all coming together to listen to their neighbors play music.

The organizers of the event, Sara and Trevor Harvey, said they are dedicated to creating an inclusive environment and hope to expand even more on musical diversity in future festivals. They are committed to helping as many people participate as possible, Sara said.

“We don’t turn anyone away,” Sara said. “If someone wants to play, we will find them a spot to play on.”

Music plays a large part in the lives of Sara and Trevor. Trevor teaches ethnomusicology — which he defines as how music relates to culture and community — at the UI. Sara is the media secretary at Longfellow Elementary School and plays piano.

Community and accessibility define the festival. Trevor said he tries to avoid phrases like “stages” in place of “porches” because they make the event more formal-sounding and less inviting than his vision.

“The ideal success would be if a neighbor whom I don’t know walked out on the front porch and starts playing an instrument they’ve never played publicly,” Trevor said.

UI graduate teaching assistant Ross Clowser, one of Trevor’s students, played jazz guitar at this year’s festival for the first time after hearing about it from Trevor.

Clowser said he values the significance of the community-based performances that come with the Front Porch Music Festival, and he said there isn’t much out there similar to the kind of atmosphere it provides.

“It’s great to have people out in the neighborhood doing something that doesn’t cost any money — it’s accessible to everybody,” Clowser said.

The idea for the festival was born when Sara and Trevor moved to the Longfellow neighborhood in 2011, next door to Nathan and Diane Platte, who had also just moved from Ann Arbor, Michigan.

Nathan and Diane had attended a similar music festival in Ann Arbor, called Water Hill Music Festival, and told Sara and Trevor about it.

After a couple of years and more conversations on the creativity of the event, the group decided that Longfellow was the perfect neighborhood to put on a similar festival. Trevor described Longfellow as an easily walkable neighborhood, with beautiful houses and lots of porches.

This was the first Front Porch Music Festival to take place while students were in town. The festival, normally held in June, was pushed back to September because of COVID-19. But even when students aren’t around, Trevor said the festival’s charm is never lost.

“It doesn’t matter how many people show up,” Trevor said. “It’s the fact that people want to engage in this sort of thing and it’s become meaningful.”