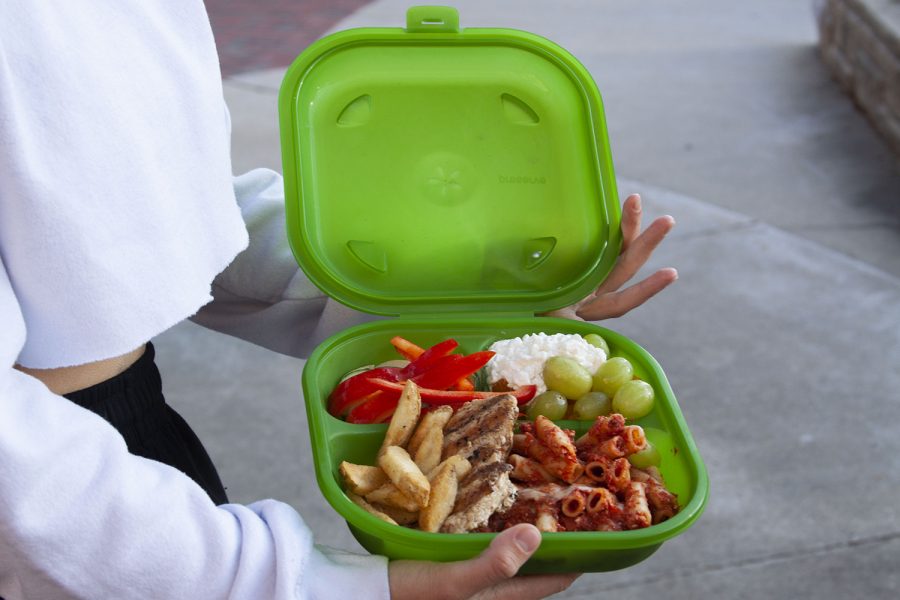 University of Iowa’s Housing and Dining program — Market2Go — launched as a campus solution to students’ inability to eat in the dining halls because of COVID-19, and has returned for this with a few eco-friendly changes.

The program is to allow students to take food to go and reduce food waste, UI Housing and Dining said in its Market2Go mission statement.

Elijah Redington, a UI freshman, said he has used the program a couple of times since the beginning of the semester.

“Once when I felt a little sick, the Market2Go was an option to still be able to eat food but not possibly expose others,” Redington said. “However, I’ve also been looking forward to the program to take food and be able to eat on the Pentacrest.”

Market2Go used throw-away food containers to eliminate the contact at the dining halls last spring, but is using green reusable plastic containers this year for a more environmentally-friendly campus, the housing and dining website said.

Available with all UI meal plans, students receive a free-of-cost, plastic green container. At all dining hall locations — Burge, Catlett, and Hillcrest — students can take one entree, 2-3 sides, and a dessert of their choice in the container.

“It’s definitely a good thing, not necessarily my first concern as the silverware and cups you still have to throw out, but it is good that UI Dining has a system that is more cost-effective,” Redington said.

“Before coming to school, I had read about the program and was excited to utilize Market2Go.” UI Freshman Ashley Mores said. “When Market2Go was delayed I was sad, but super excited now with its return.”

The Market2Go program was slated to open alongside the beginning of classes, but was delayed due to technical difficulties, according to an apology from the University of Iowa Housing and Dining.

“I was a little disappointed that it was pushed back as I was planning on using it that week, but I think it was worth it cause the program runs pretty smoothly,” Redington said.

For students not wanting to consistently use the Market2Go program, UI Housing and Dining is giving students carabiners for students to take in exchange for a green food container.

UI student Ashley Mores said she is concerned about the carabiner system because she has already lost and found it.

The program is free of charge with the utilization of a UI meal plan. If a student loses a container or carabiner, a $5 charge goes on a student’s UI Billing account for each item lost.