Iowa volleyball swept by No. 12 Nebraska

The Nebraska offense overpowered the Hawkeyes in Lincoln Saturday afternoon, as the Huskers won in three sets. 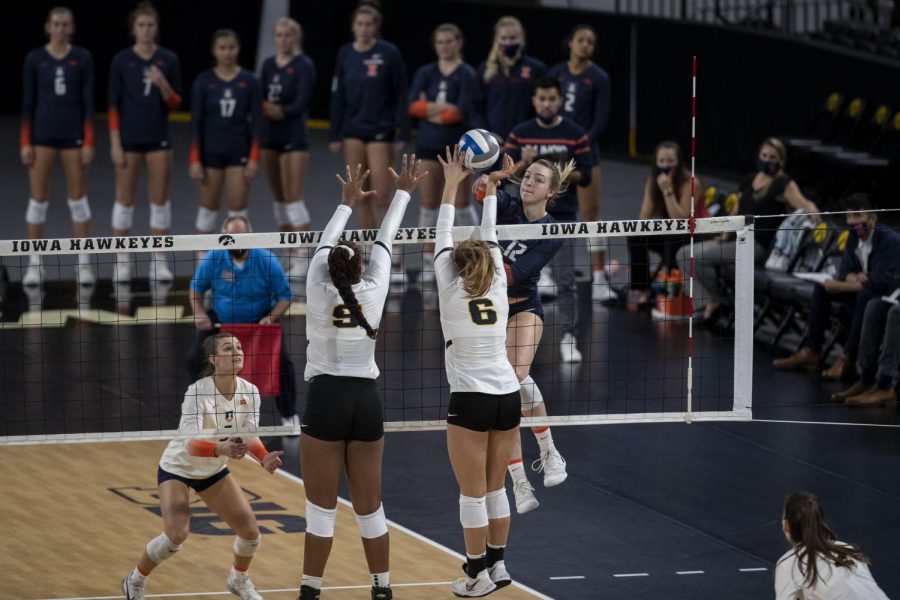 Illinois outside hitter Raina Terry spikes the ball as Iowa middle blocker Amiya Jones and setter Jenna Splitt attempt to block it during a volleyball game between Iowa and Illinois at Xtreme Arena in Coralville, Iowa, on Wednesday, Sept. 22, 2021. The Fighting Illini defeated the Hawkeyes with a score of 3-2.

The Nebraska offense proved to be too tough for Iowa, as junior outside hitter Madi Kubic led the Huskers with 15 kills throughout the three-set match. Husker senior setter Nicklin Hanes held the powerful Nebraska offense together, amassing 40 assists in the contest.

Hawkeye senior outside hitter Courtney Buzzerio continued her streak of double-digit kills, notching 13 kills. Buzzerio has amassed double-digit kills in each of the Hawkeyes’ 12 matches this season, and leads Iowa with 219 kills.

Freshman setter Jenna Splitt built off of her success from her debut against Illinois last week, tallying 16 assists in the match. Splitt is a part of a strong freshman class for Iowa, as Toyosi Onabajo and Addie VanderWeide have also seen significant time on the court in the 2021 season.

Splitt and sophomore setter Bailey Ortega have been splitting time in a 6-2 rotation for the Hawkeyes, after Buzzerio transitioned from playing both setter and outside hitter last spring to solely outside hitter this fall.

Senior middle blocker Hannah Clayton continued her solid blocking for the Hawkeyes, finishing the match with a season-high six blocks.

Senior libero Maddie Slagle finished the match against Nebraska with a team-high 11 digs. Slagle ranks first on the Hawkeyes with 150 digs on the season.

With the loss to Nebraska, Iowa now is 2-10 overall and 0-2 in Big Ten play. The Hawkeyes have the worst overall record in the conference.

The Hawkeyes’ most important area to improve is defense, as Iowa has been outblocked in nine matches this season.

The senior has accumulated 278 career blocks.

The Hawkeyes will face off against Michigan State Friday at Xtream Arena — the third conference match of the season.

The Spartans are 7-3 after losing in three sets to Indiana. Michigan State has one match before its contest with Iowa, playing Michigan Sunday afternoon.

Michigan State is led by redshirt freshman outside hitter Sarah Franklin, who is the reigning Big Ten Freshman of the Week. Franklin is 10th in the conference with 4.56 kills per set.

The Hawkeyes will take on the Spartans Friday at 7 p.m.