Campbell, Benson fly all over the field in Iowa’s win over Colorado State

Linebacker duo Seth Benson and Jack Campbell lead Iowa’s defense both on and off the field. 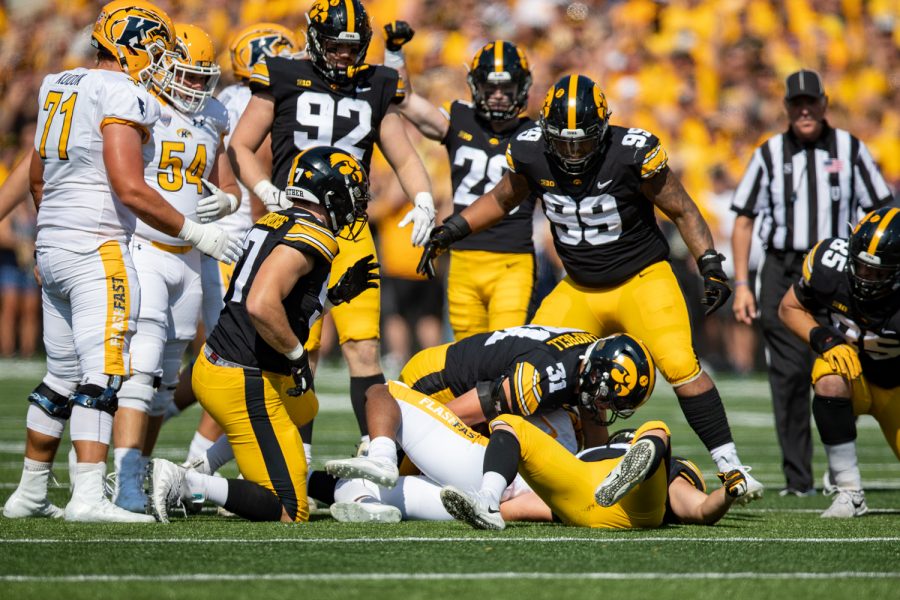 Iowa football’s defense registered 90 tackles in the Hawkeyes’ 24-14 win over Colorado State at Kinnick Stadium Saturday. Two players were responsible for nearly a third of those tackles: juniors Jack Campbell and Seth Benson.

The linebacking duo registered 29 tackles against Colorado State. Campbell came up with 18 tackles, while Benson produced 11.

The pair attribute their on-field success to the bond they share off the playing surface.

“Yeah, I’d say just, it starts with building that relationship off the field,” Campbell said. “[Benson and I] do like numerous Bible studies together. Being a Christian, it’s pretty cool to have someone right next to you who you’ve talked to about hard things with and you know you can trust.

Benson and Campbell’s friendship was most evident Saturday when Campbell recovered a fumble that eventually led to a game-tying touchdown from wide receiver Tyrone Tracy Jr.

Trailing 14-7 with a little over eight minutes remaining in the third quarter, Campbell and the Hawkeyes had Colorado State backed up to its own 11-yard line for a second-and-23 play. Shortly after Ram quarterback Todd Centeio snapped the ball, it popped free and Campbell fell on it.

Campbell recovered the football at the 6-yard line by the center hashes. As soon as Campbell got up, Benson dashed from Kinnick’s east sideline near the 10-yard line to celebrate with him.

“That’s something that we’ve been trying to build since I got here because [Benson] was a year ahead of me,” Campbell said. “. . . The relationship with [sophomore linebacker Jestin Jacobs], just trying to have conversations outside the building. Jestin’s a great kid. And when we get out on the field, it’s the same thing. We both hold each other to high standards.”

Campbell believes the connections he and Benson have made among Iowa’s linebackers has helped the Hawkeyes’ entire defense, not just its front seven.

“Just being able to have those connections within the linebacker group, but then you sprout it out to the defense is gonna be a major key in just keeping pushing this thing forward.”