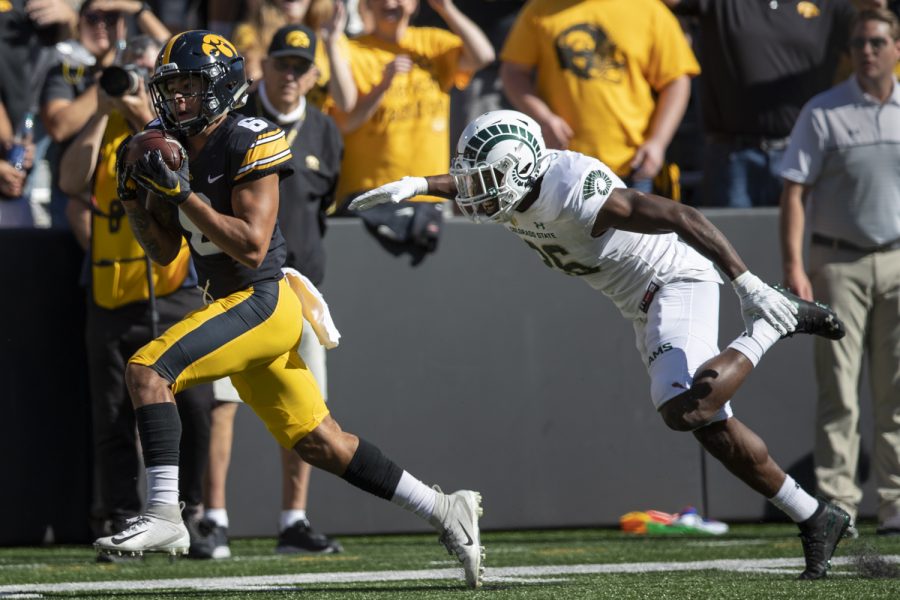 Iowa wide receiver Keagan Johnson hauls in a catch for a touchdown during a football game between Iowa and Colorado State at Kinnick Stadium on Saturday, Sept. 25, 2021. The Hawkeyes defeated the Rams 24-14.

As Keagan Johnson strided down the east sideline at Kinnick Stadium Saturday afternoon, he turned around for just a moment. Johnson didn’t see what he was expecting when he looked over his shoulder, however.

The 6-foot-1, 197-pound wide receiver thought he’d see an oval-shaped leather ball flying through the air in his direction. Instead, the only thing that caught Johnson’s eye was the harsh and unforgiving Saturday afternoon sun.

The sun didn’t overheat the patrons who watched Iowa’s 24-14 win over Colorado State at Kinnick Saturday. The temperature was a favorable 71 degrees when the game started at 2:30 p.m.

What the sun did do Saturday was blind Johnson and others on Duke Slater Field. The rays of one of the galaxy’s largest stars washed over the bleachers, turf, and scoreboards at Kinnick like a light in a dark room, illuminating even the dimmest corners of the venue.

So, when Johnson searched the air for a football junior quarterback Spencer Petras launched at him, he didn’t have an easy time finding it.

The freshman from Bellevue, Nebraska, had raced past the Colorado State defender tasked with guarding him on the play.

The sun was Johnson’s only obstacle.

As he reached the 10-yard line, Johnson finally located the football through the sun, hauled it in, and sprinted into the end zone for his first touchdown as a Hawkeye. The 43-yard pass he corralled from Petras gave Iowa a 7-0 lead over Colorado State.

“I lost the ball for about three seconds,” Johnson said postgame. “Luckily it popped back into my vision. That’s part of it. You know, you can’t make excuses. That’s part of the elements. You see different elements throughout the year. I’m grateful I came down with it. It felt good.”

Johnson finished the game with two catches for 92 yards. His other reception came at the end of the first half, as he pulled in another over-the-shoulder throw from Petras for a 49-yard gain.

“I felt like I got my feet wet today,” Johnson said.  “I felt more confident. First catch was a big catch. As I went out there more, you know, you just feel more confident in your game, definitely.”

Johnson is one of three freshmen that have heavily factored into Iowa’s offensive rotation this season.

Johnson and offensive lineman Connor Colby both got their first starts in the Black and Gold Saturday.

Johnson said he was on the field for the Hawkeyes’ first offensive play because he’s part of a specific personnel package Iowa needed on the turf for its first snap of the game.

Ferentz said Colby started Saturday’s game because Iowa’s regular starter at right guard, Justin Britt, was injured in practice Wednesday. Ferentz added that, throughout the week, he and his coaching staff thought Britt was going to play Saturday.

Colby and Britt had been rotating at right guard through Iowa’s first three games of the season. The injury to Britt gave Colby an opportunity to break into Iowa’s starting lineup.

“It feels like we have a special class [of freshman] because we’re all happy for each other,” Johnson said. “You know, we support each other. Connor is one of the hardest-working dudes I know. He’s in the facility earlier than anyone. He just knows what he’s supposed to do and he gets it done.”

“I also want to talk about Arland [Bruce] too,” Johnson added. “There’s another guy that’s just a hard-worker. He’ll show more in the future. He’s super special. He just has an explosive ability. He just has a knack to make big plays.”

Bruce is the other freshman that’s seen consistent playing time on the field like Colby and Johnson.

Bruce has played in all four of Iowa’s games in 2021, though he’s only shown up in the postgame box score in two of those contests. Against Kent State Sept. 18, Bruce caught a six-yard pass.

“We have five, six guys in the mix there at [wide receiver],” Hawkeye head coach Kirk Ferentz said. “I’ve been consistent in just saying [Johnson has] impressed us since he got here, and Arland Bruce the same thing . . . Those are two young guys that we really have high hopes for, and it’s going to help their confidence having that opportunity today.”