Iowa responds in second half, improves to 4-0 with win over Colorado State

The No. 5 Hawkeyes trailed at halftime, but controlled the second half for their fourth win of the season. 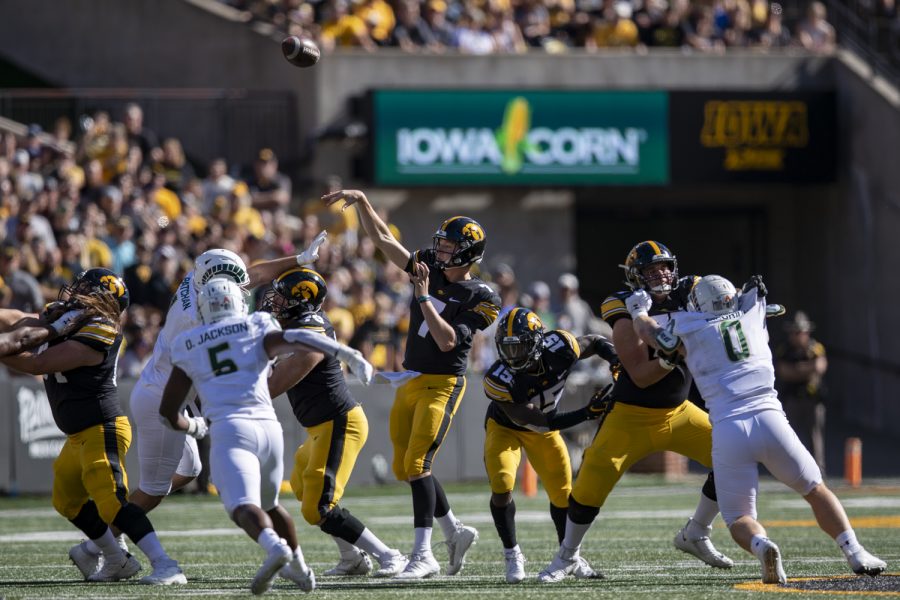 The No. 5 Iowa football team ran off the Duke Slater Field turf to boos from the Hawkeye fans in the Kinnick Stadium stands when Colorado State held a seven-point going into halftime.

The Hawkeyes must have gotten the message.

The Rams scored two touchdowns in the final four minutes of the second quarter to take a 14-7 lead at the break. The second Colorado State score in that stretch came after Iowa quarterback Spencer Petras threw an interception that set the Rams up deep in Hawkeye territory.

Petras snapped his interception-free streak at 167 throws when he tried to force a pass to Tyrone Tracy Jr. in the red zone. The ball was picked off by Colorado State’s Robert Floyd and ran back 62 yards, setting the Rams up at the Hawkeye 23-yard line. Colorado State scored five plays later with 24 seconds remaining in the half.

The second half was better for Iowa.

After forcing a turnover at Colorado State’s own six-yard line, Tracy ran in for a touchdown to tie the game at 14 with 8:17 remaining in the third quarter. The Hawkeyes took a 21-14 lead on a 27-yard touchdown pass from Petras to tight end Sam LaPorta later in the third quarter. Iowa faked a screen on the play, leaving LaPorta uncovered over the middle of the field.

Petras went 15-for-23 for 224 yards, two touchdowns, and an interception on the day.

A Caleb Shudak field goal extended Iowa’s lead to double-digits in the fourth quarter, and the Hawkeyes controlled the game from there. The Rams didn’t score the entire second half.

The Hawkeyes improve to 4-0 on the season with their win over the Rams. Saturday’s victory also marks the end of Iowa’s 2021 nonconference schedule.

Iowa plays eight conference games over the next nine weeks to close out the regular season.

The Hawkeyes have now won 10-straight games going back to last season. Iowa has the longest nonconference winning streak in the nation (15 games).

Colorado State running back A’Jon Vivens took a handoff on second-and-23 backed up deep in his own territory, only to be hit by Iowa defensive lineman Yahya Black at the Rams’ three-yard line. Vivens fumbled and Hawkeye linebacker Jack Campbell recovered the ball at Colorado State’s six-yard line.

The next play, Tracy took a statue of liberty-esque handoff and went untouched into the end zone.

At the time of the fumble, Colorado State still led, 14-7 with 8:30 remaining in the third quarter. But the Hawkeyes took advantage of the miscue and controlled the game from there on out.

Black’s forced fumble is the ninth turnover Iowa’s defense has forced this season.

First-year wide receiver Keagan Johnson started Saturday’s game against Colorado State, and made the most of his time on the field.

Johnson’s first reception as a Hawkeye was a 43-yard touchdown to start the second quarter that put Iowa up 7-0. The 6-foot-1, 197-pounder also hauled in a 49-yard catch later in the quarter, giving him two receptions for 92 yards and a touchdown against the Rams.

Campbell flies around the field

Big Ten Defensive Player of the Week honors may be in order for Campbell.

The junior recorded 18 tackles (seven solo), broke up two passes, and recovered a fumble against the Rams.

Iowa hits the road next week for a Friday night game against Maryland (4-0) in College Park. The game is scheduled to kick off at 7 p.m. CT and will air on FS1.