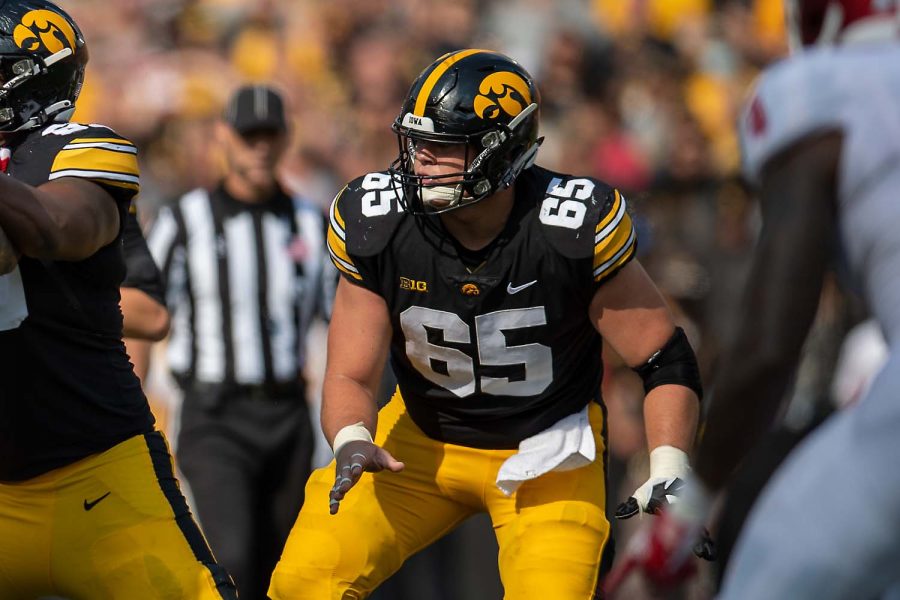 Iowa center Tyler Linderbaum surveys the field during a football game between No. 18 Iowa and No. 17 Indiana at Kinnick Stadium on Saturday, Sept. 4, 2021. The Hawkeyes defeated the Hoosiers 34-6.

The No. 5 Iowa football team will take on Mountain West opponent Colorado State this Saturday at Kinnick Stadium.

The Hawkeyes will be looking for their 10th consecutive win dating back to the 2020 season, while Colorado State will try to continue its momentum from its upset win against Toledo.

The Daily Iowan previews the matchup ahead of the 2:35 p.m. kickoff on Saturday. The game will be aired live on FS1.
Marquee matchup
While the Rams may not look threatening to the No. 5 Hawkeyes, they took down Toledo — a team that came within three points of beating No. 12 Notre Dame this season — in an upset, 22-6, in Week 3.

And the Rams’ victory came behind their high-powered defense.

The Rams held Toledo to just 22 rushing yards in the entire 60 minutes. Hawkeye running back Tyler Goodson had a career game in Week 2, rushing for 153 yards and three touchdowns.

But the Rams defense will have to get past the Hawkeye rotation of offensive linemen — anchored by junior center Tyler Linderbaum.

But around Linderbaum, true freshman Connor Colby, redshirt freshman Tyler Elsbury, and junior Jack Plumb rotate in and out of the game. Senior guard Kyler Schott — after missing the first two games of the year with a preseason injury — entered back into the two-deeps in Week 3, playing limited snaps.

As a unit, the Hawkeye offensive line has allowed six sacks of Petras throughout three games.

RELATED: Keeping the faith: How Caleb Shudak stayed the course to become Iowa’s No. 1 kicker
Getting to know the Rams
The Daily Iowan spoke with Rocky Mountain Collegian reporter Bailey Shepherd to preview the Hawkeyes’ matchup with the Rams.

The Daily Iowan: Colorado has a strong defensive line, one that picked up six sacks against Toledo last week. What can you say to their defensive line?

Shepherd: So, you’re right on with that one. I think that was really the only reason we were able to pull out of  that game… in that game in particular, our offense was really struggling. I mean, we didn’t even put points on the board until the last minute of the third quarter. And we even struggled to get that touchdown in. Our defense really carried us through that game… Our secondary is also obviously not as strong as our offensive line but we do impose a pretty good threat on the running game in that respect.

DI: Colorado State upset Toledo last week as 12-point underdogs, and the week before that Toledo came within three points of upsetting Notre Dame. How significant is that for Colorado State?

Shepherd: I mean honestly it was, I think it was exactly what we needed. Because, I mean ,you look at our opening game of the season and we lose to an FCS team, pretty handedly at home. It’s obviously not a great start. But then you go to the next week against Vanderbilt, who arguably had a little more embarrassing result against an FCS team, and they were able to beat us as well. So, we’ve been down on ourselves. [The win against Toledo] was the impact win that we needed to kind of light a fire under our players, if you will, to say, “This is for real.The season is here, so lets operate the way we want to.” They kind of needed that [win].

Shepherd: It was really hard to watch our offense [last season]. We really didn’t have that established quarterback. And,Trey McBride was our established, you know, number one receiver, and he still is. He brings such a different element to the game. If you watch him, he’s not afraid to get his hands dirty as a rusher. So, it really is like the textbook definition of what you would consider a good tight end. And you know he’s a local from Colorado. So he really, really kind of brings all the spirit to the team. He’s kind of like the epitome of what they want CSU to be.

DI: What’s your prediction for the game this Saturday?

This interview has been lightly edited for length and clarity.