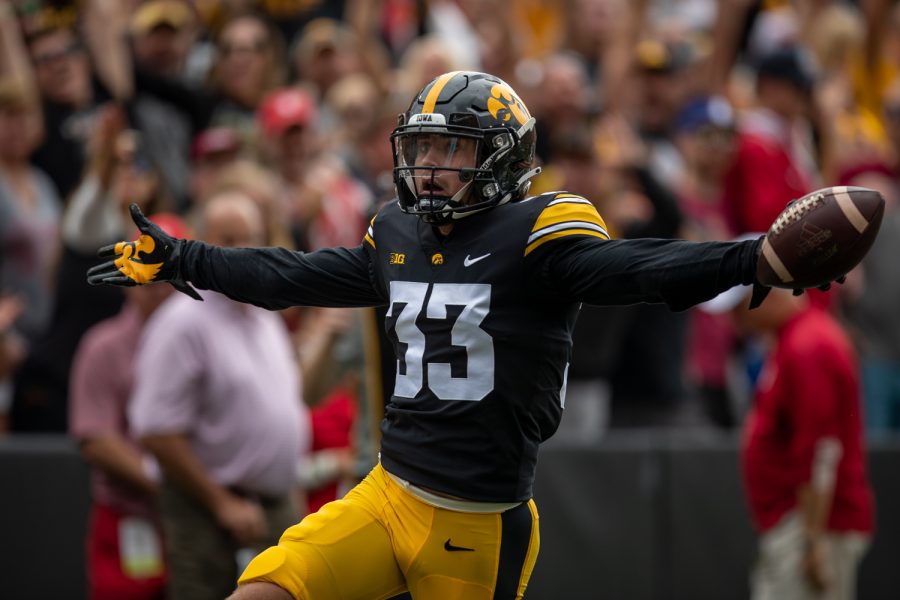 Iowa defensive back Riley Moss returns an interception for a touchdown during a football game between No. 18 Iowa and No. 17 Indiana at Kinnick Stadium on Saturday, Sept. 4, 2021. (Jerod Ringwald/The Daily Iowan)

Daily Iowan: Do you have a guilty pleasure TV show? Like something you’re afraid to tell your friends that you watch a lot?

Riley Moss: Not really, to be honest with you. I’d say my favorite show right now is “Outer Banks,” but like all my boys watch that. So, it’s not really a guilty pleasure.

DI: Do you have a favorite movie then?

DI: Why do you love that movie?

Moss: Leonardo DiCaprio is crazy in it. And it’s crazy that most of that stuff actually happened. It’s a wild story.

DI: Everyone has their favorite song that gets them pumped up before a game, but do you have a song you like to play when you’re sad? Do you have a “Sad songs to cry to in the shower playlist?”

Moss: It’s an Olivia Rodrigo song. It’s so good though. “Driver’s License,” that’s what it’s called. That’s my sad song. I got a Jeep, so I’ll take the top down and go on a little sunset cruise by myself and not tell anyone and listen to that song.

DI: What is the difference between Nebraska corn and Iowa corn?

DI: Do you have a go-to joke that you tell?

DI: You grew up in Ankeny. What’s it like now to play for Iowa, your home-state team?

Moss: It’s really cool because it was my dream since I was a little kid. You know, me and my dad had season tickets forever. You know, I always asked him, “You think I could play at Iowa?” He said, “You know, you work hard and you do what you’re supposed to do, I think you can.” I didn’t believe him at the time. Sometimes, I didn’t believe him in high school. I kept working hard and I ended up here. Then, I kept working hard here. So, the dream really became a reality. That’s why I’ve really kept setting goals and trying to reach those goals.

DI: If you had to choose between the two, black or gold?

Moss: That’s a really good question. You know, if I’m thinking like, I’m gonna go on a date and take a girl, I’m gonna go to probably Pullman. Pullman’s really good. I also like Monica’s too. Monica’s is pretty good.

DI: Do you have a favorite Iowa football memory?

Moss: Marvin McNutt catch against Michigan State [in 2009]. That was crazy. Then, I just met [McNutt] in [fall] camp for the first time. I was fanboying over him. He was probably thinking I was a weirdo. The Adrian Clayborn blocked punt [against Penn State in 2009]. Josh Jackson’s one-handed pick against Ohio State [in 2017]. That was crazy. I was there. That was nuts. There’s so many that I could name.

DI: You said you’re a Casey’s pizza guy. Is your favorite pizza there the breakfast pizza?

Moss: To be honest with you, I love their pepperoni pizza. It’s unreal. I also like their sausage breakfast pizza. It’s fire.

Moss: No, to be honest with you, there was nothing going through my mind just because it happened so fast. You know, next thing I know, I was in the end zone. I didn’t even know how to react. Yeah, it was so quick and it was something I’ll never forget for the rest of my life.

DI: What’s the dumbest question you’ve ever been asked at a meeting with reporters and was it something I said?