Bentley Steven, Kid Captain for the Iowa-Colorado State game, has had two surgeries since age 2 to relieve pain caused by the condition. 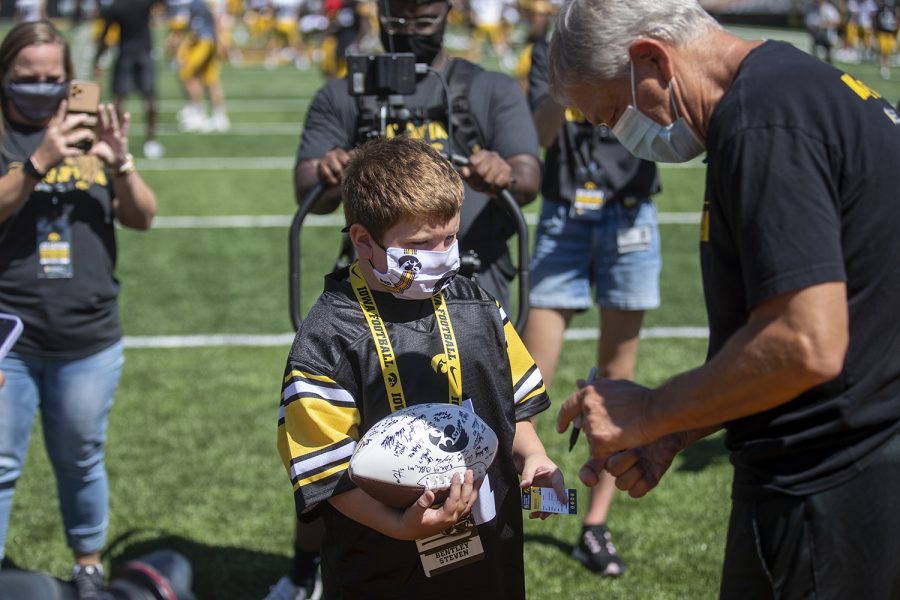 This week’s Kid Captain Bentley Steven is excited to be back in Iowa City for game day at Kinnick Stadium with his family. He attended his first game in 2019 — the same year his mom started nominating him for Kid Captain.

Bentley, from Gladbrook, Iowa, is a very active 9-year-old boy who loves playing sports, like soccer, basketball, football, wrestling, and motocross. Bentley’s dad, Michael Steven, would also describe him as a lover, very caring, and in tune with his emotions.

His parents said Bentley has grown and changed greatly since he first started getting headaches that caused him to fall to the ground in pain at age 2.

Ashley Steven, Bentley’s mom, said she remembers being at her mother’s house when it first happened. Bentley was on a slide, sliding into a kiddie pool, when he suddenly keeled over the side of the pool clutching his head. After he started having more headache episodes that left him in intense pain, Ashley took Bentley to the emergency room.

“I was a new mom. I didn’t have any kids, I didn’t know,” Ashley said. “But something in my gut was telling me something wasn’t right.”

Bentley’s pediatrician ordered an MRI and Bentley was diagnosed with Chiari malformation, a condition where the brain is too big for the skull and spinal fluid can’t drain properly, causing painful headaches.

After being diagnosed with Chiari, Bentley had his first decompression surgery, Michael said. Bentley’s doctor removed part of the base of his skull to allow the spinal fluid to drain. He was diagnosed with bacterial meningitis not long after, but soon recovered.

Before the surgery, Bentley’s speech was behind, Michael said. He would say individual words here and there but wouldn’t put them together.

“He didn’t talk, and it’s like once he had that surgery, he never shut up,” Ashley said. “He was actually able to talk and form sentences. It’s like he had it all in there, he just couldn’t get it out.”

Bentley started getting Chiari headaches again when he was 4, and had a second decompression surgery, Michael said. The bone removed during the first surgery started growing back, so it had to be removed again.

“He’s started to open up and talk about it a little bit more,” Michael said. “He still doesn’t like people noticing his scar on the back of his head, but he’ll talk about Chiari more as he’s getting a little older now.”

Bentley still occasionally gets Chiari headaches, but now he knows what to do to calm himself down and make the pain go away, Michael said.

The family used to go to the Conquer Chiari walk in Des Moines, but the event hasn’t been held for the past two years. Bentley was the youngest kid with Chiari at the walk, so people would flock to him, Ashley said. Adults with Chiari would talk to him with admiration for surviving with the painful headaches they did, she added.

To make the game even more special for Bentley, Ashley’s cousin, a former Iowa basketball player from the 1980 Final Four team, and some of his friends will be at the game on Saturday to cheer on Bentley.

Ashley said she is excited for Bentley to get to experience walking onto the field and watching the Hawkeyes take on Colorado State on Saturday.

She added that said she wants to use it as an opportunity to raise awareness for Chiari.

“The symptoms for Chiari are not like you go in, you get tested for strep throat and you have strep throat,” Ashley said. “The signs of Chiari can vary from patient to patient.”