Colorado State tight end Trey McBride has already hauled in 33 passes for 339 yards and a touchdown this season. 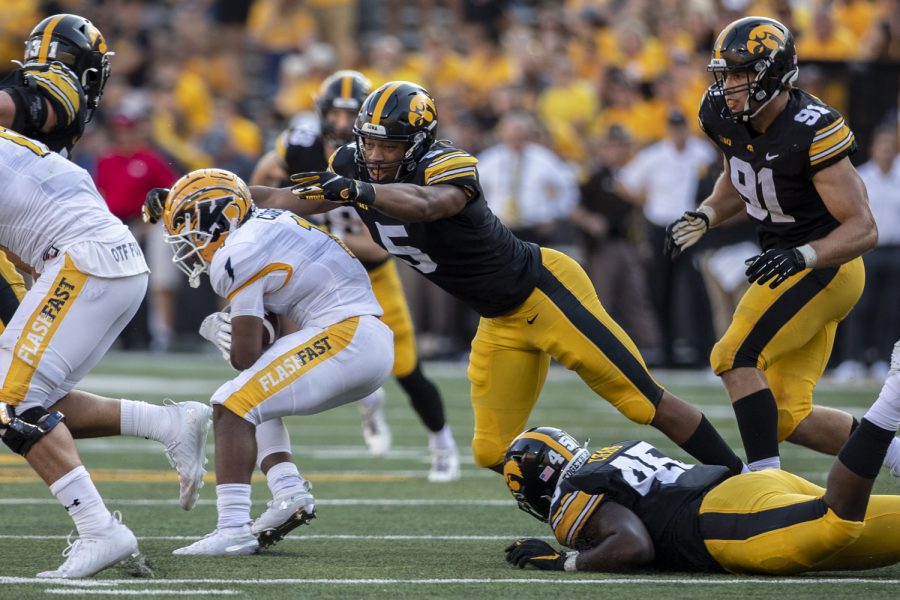 Iowa linebacker Jestin Jacobs makes a tackle during a football game between Iowa and Kent State at Kinnick Stadium on Saturday, Sept. 18, 2021. The Hawkeyes defeated the Golden Flashes with a score of 30-7. (Grace Smith/The Daily Iowan)

The best tight end to grace Duke Slater Field this Saturday might not be on Iowa football’s roster. That title likely belongs to Colorado State’s Trey McBride.

Some NFL Draft experts thought McBride, a senior, would leave Fort Collins, Colorado, at the end of the 2020 season and go pro. The 6-foot-4, 260-pound Coloradan corralled 22 passes for 330 yards and four touchdowns in a season that was shortened to just four games because of COVID-19 last year.

Assistant Scouting Director for Sports Illustrated Jack Borowsky wrote Sept. 14 that McBride has enough talent to be a top-five tight end in the NFL someday.

In August, ESPN NFL Draft analyst Todd McShay included McBride on his list of the top 50 college football prospects to watch this season. McBride was No. 27 on McShay’s list ahead of the 2022 NFL Draft.

“Playing football for Colorado State has been an incredibly rewarding experience,” McBride tweeted. “I believe in [head coach Steve Addazio] and his staff, and I also have goals that I have not accomplished yet here at CSU.”

“After much thought and prayer, I will be back for a final year to play with my brothers and lead this team to a championship. I am thankful to all who have supported me, and I can’t wait to see you all in the stands cheering us on in 2021 for our best season yet.”

McBride and the Rams are currently 1-2 on the season. Colorado State has picked up a 22-6 win over Toledo and suffered 24-21 and 42-23 losses to Vanderbilt and South Dakota State, respectively.

Despite that, the Hawkeyes aren’t taking their matchup with McBride and the Rams this weekend lightly.

“Obviously, they have a great tight end,” Hawkeye linebacker Jestin Jacobs said. “Obviously, he’s been a problem for many teams this year. We just know we have to come physically ready to stop him.”

While the Hawkeyes may not have the best tight end in this Saturday’s game, they’ve become accustomed to great TE play on a weekly basis over the last few years with the likes of now-NFL pros George Kittle, T.J. Hockenson, and Noah Fant all donning the Black and Gold from 2012 to 2018.

The number of now-professional tight ends that have played at Iowa recently might help the Hawkeyes guard McBride this weekend.

“Yeah, I mean, our guys on the scout team don’t look like [McBride], I can tell you that,” Hawkeye head coach Kirk Ferentz said at a meeting with reporters Tuesday. “It’s just one of those deals. But at least we know what [a good tight end] looks like. That’s for sure. And we’ve played against a lot of really good tight ends.”

Ferentz added that McBride is a terrific blocker that Colorado State likes to move throughout its various offensive formations. Ferentz said McBride “does everything well,” from route-running to pass-catching.

Saturday’s Iowa-Colorado State game is scheduled to kick off at 2:30 p.m. The contest will air live on FS1.