Around the Big Ten: Matchups, Power Rankings for Week 4

Pregame Editor Robert Read provided the DI’s updated power rankings ahead of the fourth week of the season. 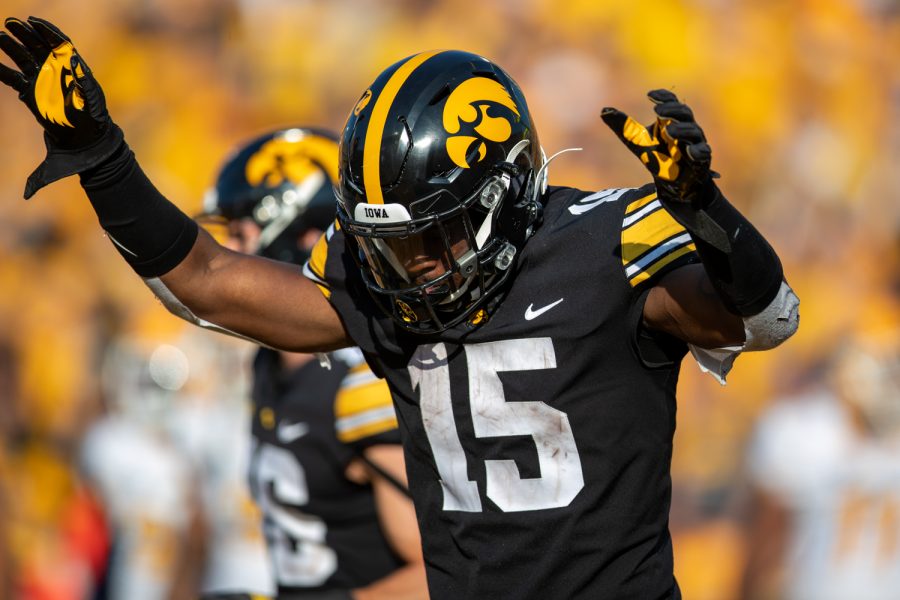 Iowa running back Tyler Goodson celebrates a touchdown during a football game between Iowa and Kent State at Kinnick Stadium on Saturday, Sept. 18, 2021. The Hawkeyes defeated the Golden Flashes 30-7.

The Daily Iowan’s Pregame Editor Robert Read ranked all 14 Big Ten football teams and previewed every conference Week 4 matchup in this week’s edition of Around the Big Ten.

The Hawkeyes remain at No. 1 in the DI’s power rankings, while Nebraska is still at the bottom.

Here are the full rankings and all the game previews.
Power Rankings

Iowa — This still feels weird.
Penn State — Oct. 9 can’t come soon enough.
Ohio State — This also still feels weird.
Wisconsin — We will find out a lot about the Badgers this week.
Michigan — The Wolverines were underrated heading into the season, a refreshing change.
Michigan State — Are the Spartans again?
Minnesota — The Gophers are a second-tier West team this season.
Maryland — The Maryland-Illinois game hurt my eyes.
Rutgers — The Scarlet Knights are 3-0!
Indiana — The Hoosiers are a good football team with a tough schedule.
Purdue — Hope you’re OK, David Bell.
Northwestern — The Iowa-Northwestern matchup is going to be tough … to watch.
Illinois — Might not get another conference win this season.
Nebraska — Kept it close with Oklahoma somehow. Good for you.

Well, at least this is an in-state rivalry? Still not much of a reason to watch.

The Fighting Irish have been in close games with inferior teams. Time to see how they fare against a ranked Big Ten foe.

I’ll be interested to see how the Gophers perform once they start playing conference teams again.

Watch this game at your own risk.

Colorado State vs. No. 5 Iowa

One more game until the Hawkeyes hit the Big Ten stretch.

Rutgers vs. No. 19 Michigan

An undefeated Big Ten East team is about to go down (hint, it’s Rutgers).

The Boilermakers will have their drum on the field again and all will be right with the world.

Calling it now: The Golden Flashes are pulling off the upset this week. You heard it here first.

Nebraska vs. No. 20 Michigan State

A second consecutive close loss to a ranked team could be considered growth for the Huskers.

Imagine what the line would be if the Buckeyes were as dominant as they usually are.

The Hoosiers are better than their record indicates. Didn’t help that they were overrated coming into the season.