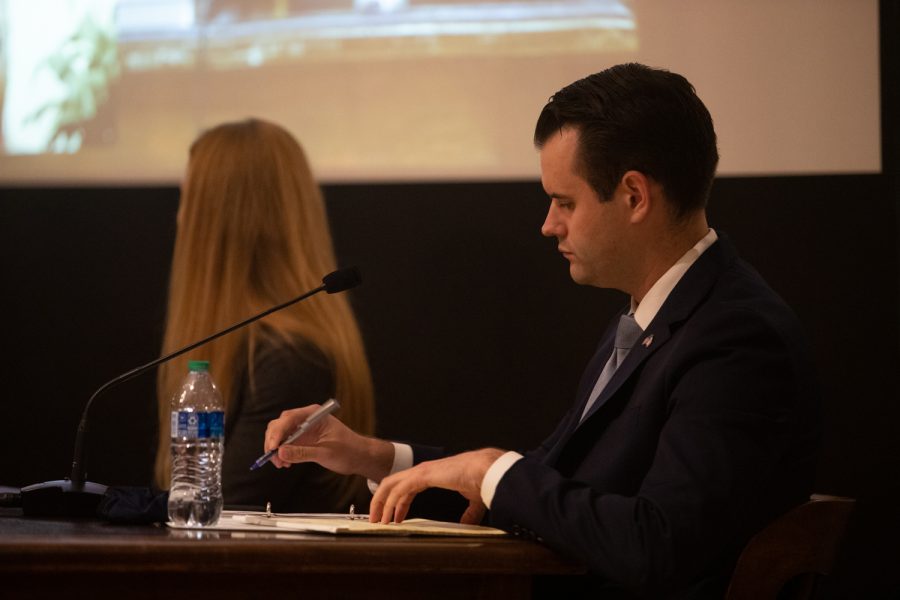 Iowa state Senator Zach Wahls takes notes during a discussion series on Free Speech and Social Media hosted by the state Board of Regents, the University of Iowa Public Policy Center, and the UI College of Law on Tuesday, Sept. 21, 2021.

Sen. Amy Sinclair, R-Allerton, and Sen. Zach Wahls, D-Coralville, joined professors and leaders of organizations in the Old Capitol Senate Chambers for a forum about free speech on social media and the government’s role in regulating social media.

The event, attended by about 30 people, came out of a directive for public universities to develop content and programs relating to free speech. In the last legislative session, the Iowa House passed House File 744, also known as the education free speech bill, 92-1, and the Senate passed it 46-0.

As previously reported by The Daily Iowan, the bill required the Board of Regents and directors of community colleges in Iowa to adopt a policy that includes specific statements regarding freedom of expression and the role of higher education in relation to free speech.

After hearing from Carl Szabo, vice president and general counsel at lobbyist group NetChoice, Mike Davis, University of Iowa alum and founder of the Internet Accountability Project — a conservative lobbying group, and Traci Griffith, associate professor at Simmons University, Wahls said one of the most concerning parts of the conversation about free speech and censorship was the decline in trust of institutions.

“We have very strong political disagreements about empirical facts in the United States,” he said.

Szabo said he is a conservative, but that sometimes conservatives find themselves in an echo chamber where they believe they are being unfairly targeted by social media companies.

He said conservatives get upset when platforms delete content, especially when it’s perceived as a viewpoint-based removal. But he said tech companies, as private businesses, have a right to curate their content.

“We respect the rights of private businesses to decide what’s best for their users and their customers and their advertising, that’s the basis for conservative decisions,” Szabo said.

Griffith said the public has developed a disdain for experts and only wants to trust “people like us.”

“Get the information out there, good or bad, right or wrong, and let people make their own informed decisions,” Davis said.

Wahls said if the situation of free speech on social media improves, it will be because people believe the results of elections, speaking to the storming of the U.S. Capitol on Jan. 6.

Sinclair said she traveled nearly three hours to Iowa City because freedom of speech on social media is one of the most important issues the legislature is facing.

“It’s difficult to find the intellectual dissonance, when I listened to both of you speak and can wholeheartedly agree with you both,” Sinclair said, referring to Davis and Szabo. “And finding the balance in where that comes in with the trust that we placed with the media, I think that this is a conversation that’s worthy of having and I think that having that in a public square as well as when Senator Wahls and I are having these discussions at the Capitol.”

UI President Barbara Wilson said free speech is fundamental to academic enterprise and that the institution encourages students to think about a variety of perspectives to make informed choices.

She said as a person who oversees a lot of young people consuming information on social media, it’s important to think about being critical media digesters.

“I think about that a lot because my field is communication, and we are always talking about teaching media literacy, and so that didn’t really come up today, the role of the consumer in all of this,” Wilson told the DI in an interview after the event.