Opinion | Unions work for everyone

Unionization is a time-honored tradition of Americans that we need to revive. 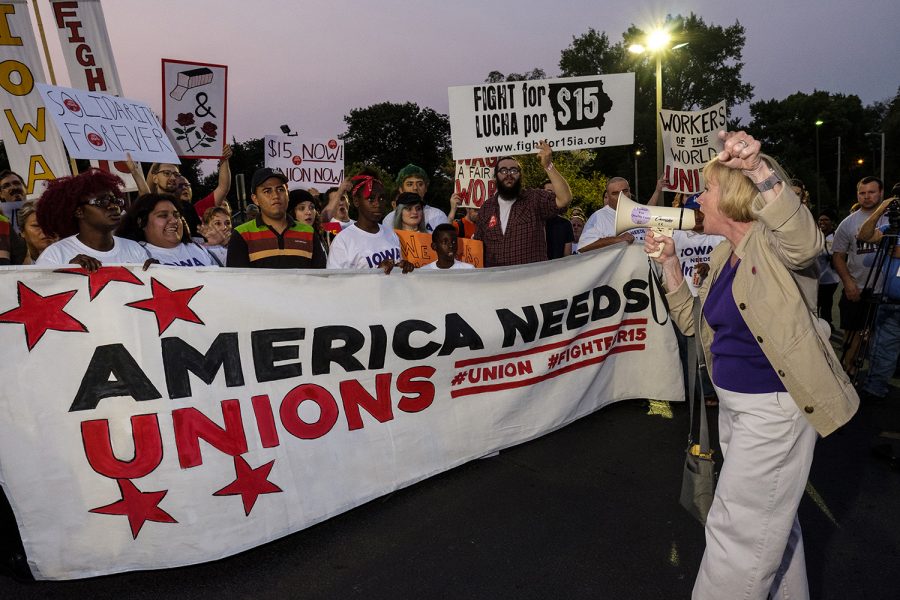 Democratic candidate for Iowa governor Kathy Glasson addresses protestors at a demonstration outside of a Burger King in Des Moines on Monday September, 4 2017. Protestors attended multiple events Des Moines on Labor Day in order to demonstrate in support of a fifteen dollar per hour minimum wage and private sector unions.

A massive victory for labor rights happened recently that may have flown under the radar — the Nabisco Workers’ Strike ended in favor of the strikers. Yet again, we are shown the benefits of labor organizing, and how even with few in numbers, it can make a massive change.

Along with wage increases, the striking workers obtained expanded sick leave and got repaid for those denied sick leave.

This is not the only recent successful strike this year. Earlier in July, workers at the Frito-Lay factory in Topeka, Kansas worked to end “suicide shifts” via strike.

The percentage of unionized workers has increased in the U.S., according to the U.S. Bureau of Labor. Alongside that, the number of laid off workers over the course of the pandemic were majority non-unionized.

The truth of the matter is, by the numbers, having a unionized workplace provides far more benefits than not unionizing. Union workers have higher median wages, longer sick leaves, are likelier to have pension plans, and health care coverage, according to the U.S. Bureau of Labor Statistics.

While it may sound good for just union workers, unions also help non-unionized workers by setting standards that other businesses meet, for fear of unions breaking out in their own workforce.

It’s no surprise that these strikes come in the midst of COVID-19, either. With the hazards of being in person for essential jobs, workers have suffered burnout to an extreme degree.

It’s no wonder as to why workers have begun reconsidering their position in the workforce and plan on quitting rather than returning to work.

All the while, some companies are so unscrupulous as to cut hazard pay. Benefits for employees may have even been cut locally, like at Iowa City favorite — Java House.

According to a petition, Java House allegedly reduced their wages from $10.10/hour to $8.75 and have declined to raise them despite employee requests.

In addition, allegations of stolen tips, poor treatment from management, and suspect firings crop up around Java House locations.

This has driven some employees to talk of unionizing and inspired the Eastern Iowa International Workers of the World chapter to start a petition in support of them.

While the petition is now closed, it will remain important to keep an eye out at Java House and other businesses. If strikes break out or unionization attempts ensue as we continue to crawl ourselves out of the pandemic, we should not hamper their efforts in the slightest.

One final benefit that should be noted of unions is that they provide for a healthier work environment.

While coffee house workers do not have to face fires or work in coal mines, they still must deal with the hazards of wage employment. Unions add an additional layer of protection against management overreach and abuse as well as providing a better means of restitution should any such cases arise.

As I’ve said in a prior piece, Iowa and the U.S. as a whole face a labor shortage as of this moment. At a time when many corporations are posting record profits, now is the time to organize.

If you believe your labor to be valuable, band together with your fellow employees, and begin the process of collectively organizing. There are plenty of resources and organizations to assist you in your efforts.

Others can do it — why not you?