The junior wide receiver has just 70 receiving yards through three games, third on the Hawkeye leaderboard. 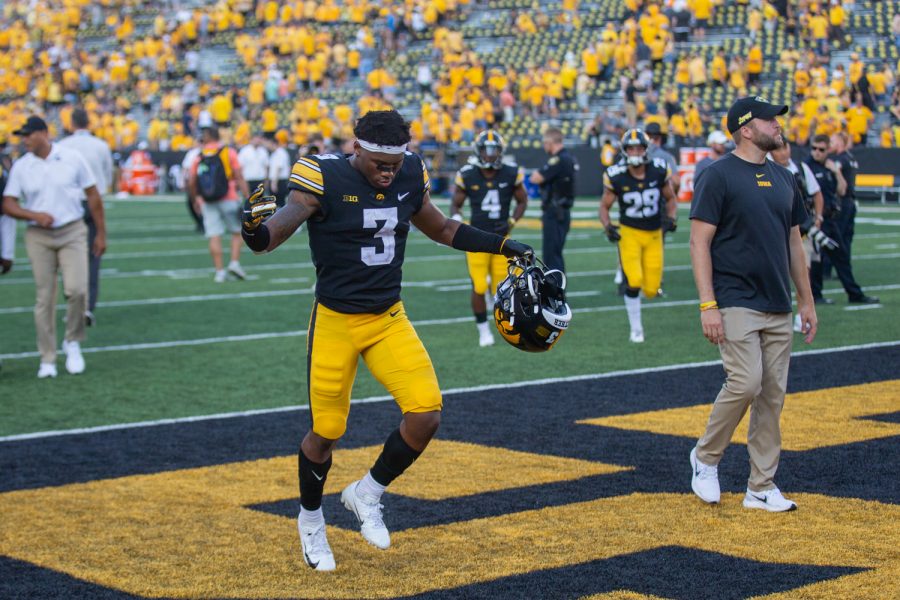 Hawkeye junior wide receiver Tyrone Tracy Jr. hauled in a catch from quarterback Spencer Petras in the third quarter of Iowa’s matchup against Kent State on Saturday. Well, that’s what he thought happened.

As Tracy hit the ground, the ball briefly fell out of his grasp. But he regained control as the play ended.

The wide receiver’s play was originally called a catch, before a review overturned to the call — much to the dismay of Tracy, head coach Kirk Ferentz, and the crowd at Kinnick Stadium.

“I don’t know that we necessarily went into the game saying, ‘We gotta get him X amount of touches,’” Ferentz said Tuesday. “But he did have more. And that’s a good thing for us, and it’s something for us to be mindful of.”

And Tracy has been hoping for more. Iowa’s No. 1 wide receiver set lofty goals for himself preceding the 2021 fall season, including 1,000 receiving yards and the Richter-Howard Receiver of the Year award — given to the best wide receiver in the Big Ten Conference.

But Hawkeye wide receivers coach Kelton Copeland knows Tracy’s frustration with limited receiving yards is not out of selfishness — it’s the opposite.

“Receivers, we’re always open,” Copeland said. “Even if there are three guys around us, and we’re on the ground, ‘I should still get the ball,’ that’s how we think. And that’s what you love about Tyrone. He’s a competitor. One of the big reasons I recruited Tyrone is because of his competitive edge. Not only his athletic abilities, but the guy, he’s a competitor. He wants to contribute to help the team win. It has nothing to do with, ‘My highlights,’ or ‘My PT,’ or ‘Give me the ball.’

“I just keep reminding him that this is a long season, and we’re going to have plenty of opportunities, and he just needs to be ready when they come about.”

While biding his time, Tracy is still a leader in the wide receiver room. And he’s making strides to improve his leadership to young Hawkeye wide receivers, including true freshmen Arland Bruce IV — who recorded his first career reception on Saturday — and Keagan Johnson.

“I think I can be a little bit more vocal on the sidelines,” Tracy said in a Zoom meeting with reporters Wednesday. “My leadership is more, ‘Imma show you, And then you can just follow me.’ So, I’d like to be a little more vocal, and then my blocking can be better too. That’s a couple things I’m working on in the next upcoming games and throughout the week.”

Tracy has seen the Hawkeye offense diversify its plays over the past few years. Tracy was originally hesitant to commit to Iowa because of its reputation as ‘Tight End U,’ but the Hawkeye coaching staff promised the offense would be different. And it is.

“We try to make it known that, you know, we’re not the same Iowa from five years ago,” Tracy said.  “We have many, many playmakers on the team that can make plays. I mean, on Saturday, you see the ball in a lot of people, different hands, making some type of play or some type of big run.”