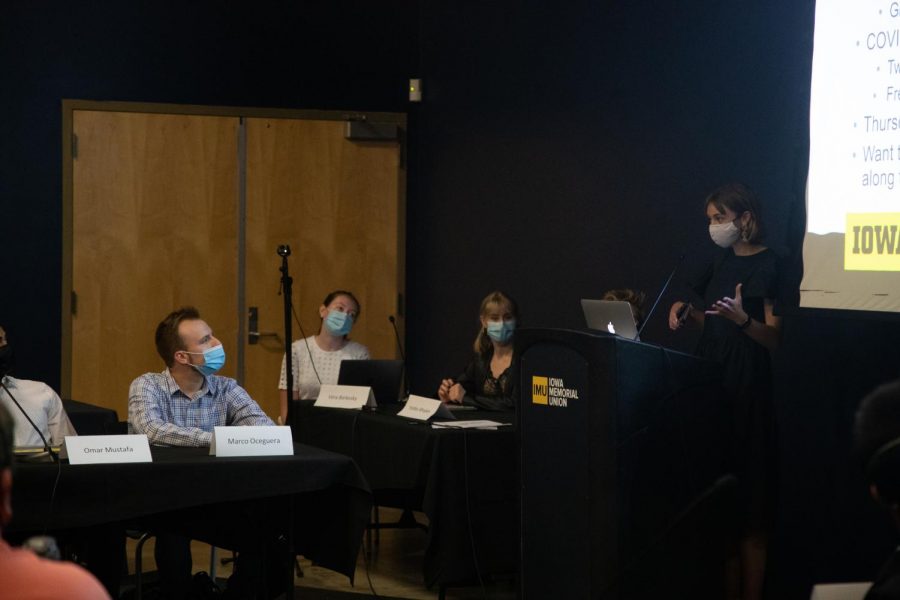 USG President Regan Smock announced Muñiz Jr.’s decision during Tuesday night’s meeting. Smock said USG will review its bylaws to determine what the next steps should be, but a situation like this is unprecedented, she said.

“We want this to be done right,” Smock told the crowded Black Box Theatre.

As previously reported by The Daily Iowan, Muñiz Jr. never held a position in student government prior to his election as vice president. Smock and Muñiz Jr. ran uncontested and were elected by the undergraduate student body in April.

The vice president position is paid, but it is currently unclear how that budget will be used following Muñiz Jr.’s exit. Smock did not say if the position will be filled internally because it is an elected position.

Muñiz Jr. did not immediately respond to a request for comment.

Twenty new members were inducted into USG on Tuesday night, swearing to uphold the principles outlined in the student government’s constitution.

At the meeting, Chair of the Internal Affairs committee Alexis Carfrae said that the pool of candidates began at 60 individuals, interviews were given to 37 of them, and from that, 20 members were chosen to fill the remaining spots. 14 first-year senators were inducted alongside five at-large senate positions and a new Disability Constituency Senator.

USG will meet in a joint session next Tuesday with the Graduate and Professional Student Government and UI President Barbara Wilson.