The senior is still a key component to the Hawkeye rushing attack despite fumbling twice against Kent State. 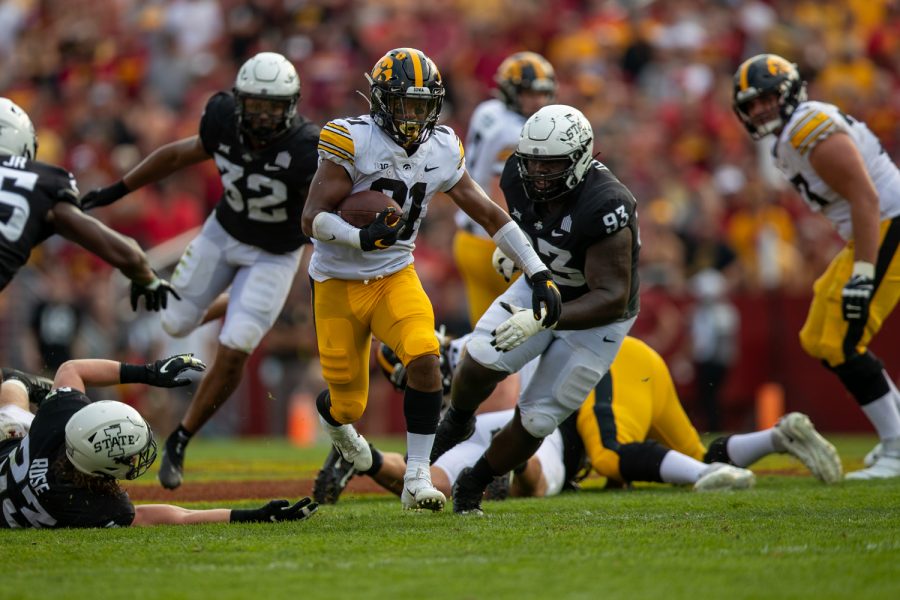 Iowa running back Ivory Kelly-Martin breaks free during a football game between No. 10 Iowa and No. 9 Iowa State at Jack Trice Stadium in Ames on Saturday, Sept. 11, 2021. The Hawkeyes defeated the Cyclones 27-17.

Ivory Kelly-Martin knows he can contribute for the Iowa football team, but has to make sure his role isn’t fumbled away.

The senior running back is averaging 4.1 yards per carry for the Hawkeyes this season as Iowa’s No. 2 option in the backfield behind starter Tyler Goodson. But Kelly-Martin was benched in Iowa’s Week 3 contest against Kent State after his second fumble of the game and third of the season. Freshman Gavin Williams came in and took carriers instead of Kelly-Martin.

“The game was a little bit tough for me, but I’m looking forward,” Kelly-Martin said on Tuesday. “And that’s something [Iowa running backs coach Ladell Betts] tried his best to tell me also — to continue to look forward. Luckily, I’ve played a lot of good football in my days, and I know my ability. I’m not going to lose any bit of my confidence. He told me the same thing — to keep my confidence.

“We’re gonna improve ball security and keep the ball in our hands. It’s never a mental type of issue. It’s all technique. We can’t control what the other team does. It’s always important to have good ball security out there on the field.”

Iowa head coach Kirk Ferentz said after the Kent State game that he still has confidence in Kelly-Martin, who was selected by his teammates as a team captain for last weekend’s game.

Ferentz called Kelly-Martin a “very good running back” and a “high-caliber” guy, and said he will continue to be a key component to Iowa’s rushing attack in Week 4 against Colorado State.

Kelly-Martin is in his fifth year with the Hawkeye football program. He tore his ACL in December last season, and worked throughout the spring and summer to be ready for the start of the 2021 season. To make the most of that work, Kelly-Martin knows he has to hold onto the ball.

“I’m doing extremely good things out there on the field,” Kelly-Martin said. “And while sometimes it didn’t look too good for me, I know there’s still plenty I can give to this football team.”
Looks like Schott will rotate again
Iowa guard Kyler Schott is on a temporary farming ban.

The senior said as much on Tuesday. Schott broke his right foot this summer while baling hay at his family farm in Coggon, Iowa. After missing the first two games of the season, Schott returned to the field for Iowa’s Week 3 game against Kent State.

Schott stood front and center as the Hawkeyes swarmed out of the locker room and onto the field, and on the third drive of the game rotated in at left guard.

“It was awesome to be back out there,” Schott said. “The Swarm is something you miss a lot. You don’t realize that until you’re not in there. Leading the Swarm is very special. Not many guys get to do it. You have to make it to your fourth or fifth year here.”

Schott was listed as Iowa’s starting right guard heading into the season, but played limited snaps against Kent State as he continues to work his way back.

Sophomore Justin Britt is still listed as Iowa’s starting right guard, so Schott anticipates rotating again against Colorado State on Saturday. Schott said he is feeling “pretty solid,” but isn’t in game shape yet.
Colorado State features premier tight end
Colorado State tight end Trey McBride is considered by some analysts, including ESPN’s Todd McShay, to be the top draft prospect at his position ahead of the 2021 NFL Draft. McBride could be a first-round pick.

And the Hawkeyes know he is the most lethal player on the Rams’ offense.

“He’s as good a tight end as you’ll see in the country,” Ferentz said.

Ferentz noted that the Rams will use McBride in a variety of ways, from throwing him screen passes to sending him deep down the field. McBride, Ferentz said, does everything well.

McBride, listed at 6-foot-4, 260 pounds, has recorded 30 receptions for 339 yards and a touchdown through the first three games of his senior season.

“He’s been a problem for many teams this year,” Iowa linebacker Jestin Jacobs said. “We know that we have to be physically ready to stop him.”