Students gathered outside the Pentacrest to belittle TikTok’s “Sister Cindy” as she preached anti-abortion, anti-LGBTQ, and anti-contraception stances. 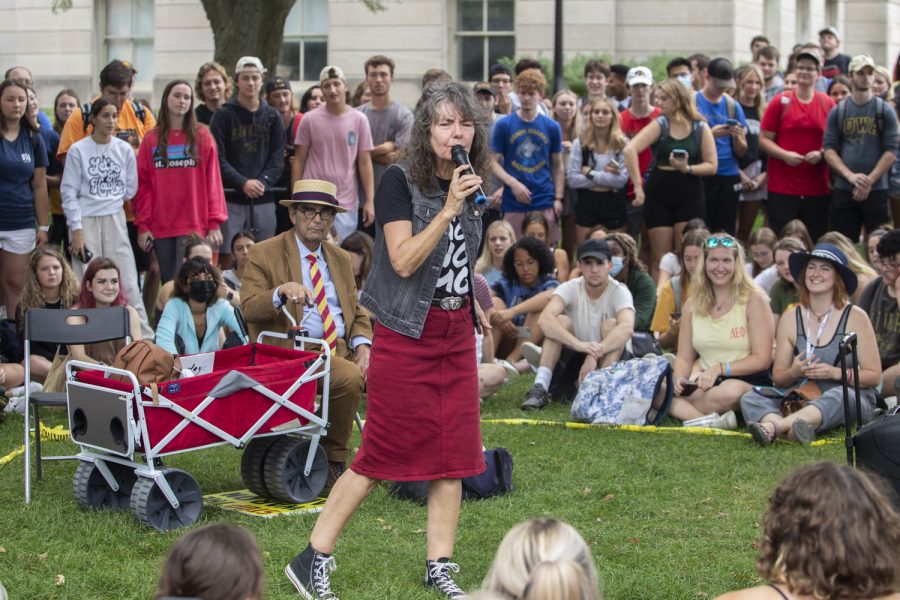 TikToker Sister Cindy spreads her ideas and shames students on the Pentacrest at the University of Iowa on Monday, Sept. 20, 2021. Sister Cindy has over 343,000 followers on TikTok and travels to various college campuses to speak. Many students attended the event as a joke and to mock both Cindy and her husband Jed.

A crowd of around 100 students gathered on the Pentacrest this afternoon to boo, scream, and jeer at evangelizing couple “Sister Cindy and Brother Jed, who have racked up hundreds of thousands of TikTok followers with their inflammatory, anti-sex messages that they take to college campuses nationwide.

Many students heard about the demonstration through Snapchat and others joined in the large gathering of students on the Pentacrest.

Cynthia Smock, who preaches as Sister Cindy, travels to colleges campus around the country to spread her anti-abortion, anti-sex, anti-contraception, and anti- LGBTQ beliefs in what she calls the ‘ho no mo revolution.’

Students at the demonstration overwhelmingly did not agree with Smock’s message, alternating between boos and ironic cheers for her condemnations of what she called sin and degeneracy.

According to Jed Smock, the group was asked to come to campus. They are on a four-week tour, according to “Brother Francisco,” another member of the group, through college campuses in America.

“I had this feeling that she would eventually come around last year,” Kit Andrews, a sophomore said.

“Brother Jed” said the couple came to the university after multiple people asked them to come. Their message to students is to stay on the path of righteousness and follow God, delivering their ideas in a particularly combative and hateful manner.

Students in the crowd were there because they had seen her on TikTok and seen her on other campuses, many said. Sister Cindy has over 300,000 followers on the platform and has visited universities in Illinois and Indiana in recent weeks.

To make “Sister Cindy” upset, two people decided to kiss in front of her. This action caused an uproar in excitement in the crowd. Andrews and their friend Kal Elwood, a sophomore, were the people that kissed in front of “Sister Cindy.”

Both Andrews and Elwood see “Sister Cindy” violating their freedom of expression by “slut shaming” students.

“People can do whatever the hell they want with their free time. It’s not gonna affect you in any way,” Andrews said.