The Hawkeye Marching Band did not attend this year’s CyHawk football game because of a 2019 alleged incident involving Iowa State University fans and the game. Members of the band will not be traveling to perform at any away game this fall. 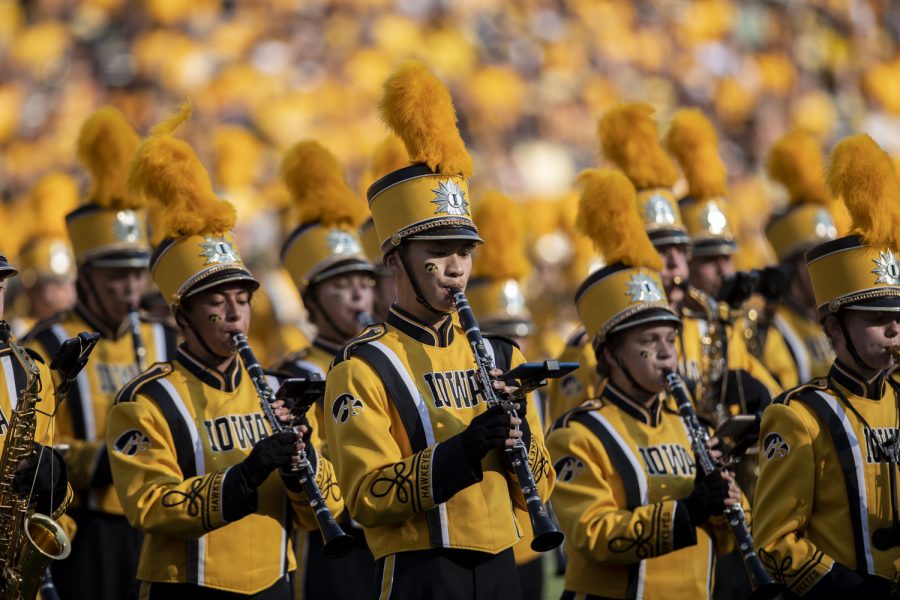 The Iowa marching band performs during halftime of a football game between Iowa and Kent State at Kinnick Stadium on Saturday, Sept. 18, 2021. The Hawkeyes defeated the Golden Flashes with a score of 30-7.

The first Cy-Hawk game in two years was missing a key element in the stands, as the Hawkeye Marching Band did not travel to Jack Trice Stadium with the football team.

Marching band student leaders and University of Iowa administrators made the decision not to travel, Director of the Hawkeye Marching Band Eric Bush wrote in an email to The Daily Iowan.

“After thoughtful conversations with student leaders in the Hawkeye Marching Band and administration at the University of Iowa,” Bush wrote. “… The HMB is not traveling to Ames for the Iowa-Iowa State football game.”

The student leaders who made the decision with Bush were mainly drum majors and section leaders, UI second year and trumpet player Emma Cryer said. The decision, she said, was made after they talked with the students in the band.

“I know that they had asked us and kind of discussed why we wouldn’t want to go to away games this year, and eventually came to that consensus,” Cryer said.

The Cy-Hawk game is normally attended by the Hawkeye Marching Band, Cryer said.

The last time a the band traveled to Iowa State, an incident between Hawkeye Marching Band members and Cyclone fans allegedly led to verbal and physical abuse of UI students, as previously reported by the DI.

Ring said the alleged incident happened during the band’s exit after the Hawkeyes won against the Cyclones, Ring said.

“They had some meetings and some protocol changes because of the incident that occurred two years ago,” Ring said. “In the heat of the moment, we were told to get off the field faster than when we should’ve. As we were exiting, we were exiting with all of the Iowa State fans, so there were multiple incidents of physical altercations.”

The Hawkeye Marching Band did not march anywhere last year because of COVID-19, Cryer said. She added that the band learned music and built relationships during that time.

“The first time I was in Kinnick playing with a band was last weekend, the first home game,” Cryer said. “I was overwhelmed with emotion, like I was almost crying.”

Some sections of the band have gotten together to support the team for away games, Cryer said.

“Marching band at this point is pretty close to back to what it was pre-COVID besides a couple different guidelines,” Cryer said. “We were pretty confident that we weren’t going to the Cy-Hawk game pretty early on in our season because of all the things that happened, that it just wasn’t safe for us to go for a while.”

Even though the band did not travel with the team this year, they will be cheering on the team from home, Bush wrote.

“The band looks forward to cheering on the Hawkeyes from home,” Bush wrote.