After a historic freshman season, Noel is competing at the Dallas-Fort Worth 25K Tournament this week for the first time in four months. 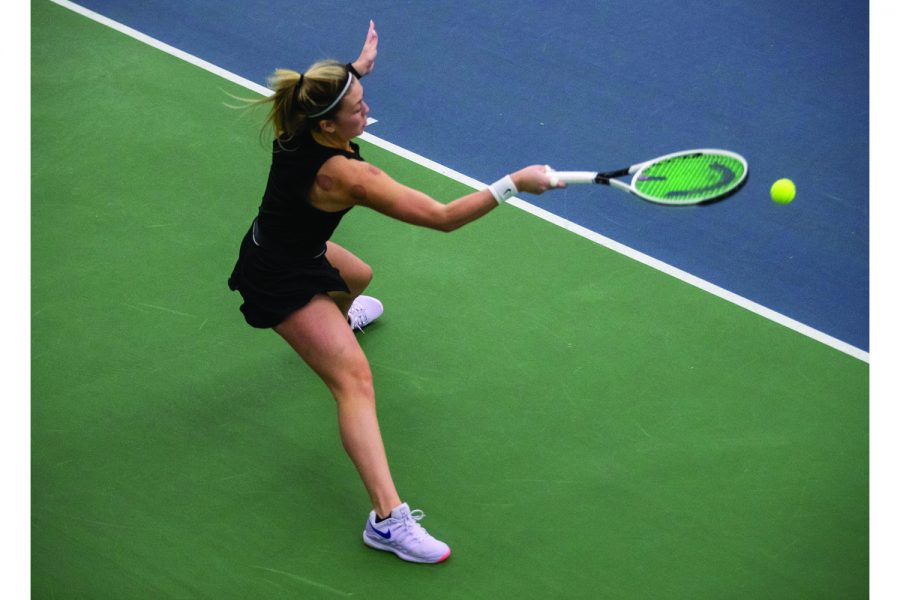 Iowa’s Alexa Noel goes low to return a ball during a women's tennis meet at the Hawkeye Tennis and Recreation Complex on Thursday, Feb. 26, 2021. The Hawkeyes defeated the Hoosiers with a score of 4-3.

Iowa women’s tennis will kick off its 2021 season this week at the Dallas-Fort Worth 25K Tournament in Dallas, Texas.

Hawkeye sophomore Alexa Noel, the program’s first-ever All-American, will compete for the first time since she suffered an ankle injury at the NCAA Singles Tournament in May.

Noel is coming off a near-perfect 24-1 singles record her freshman year, including an undefeated conference record of 17-0. Her historic first year also earned her Big Ten Player and Freshman of the Year honors.

The sophomore from Summit, New Jersey, is the 12th-ranked individual player in the Intercollegiate Tennis Association’s preseason poll — the highest a Hawkeye has ever ranked.

“She’s definitely starting her sophomore year ahead of where I thought she was playing at the beginning of her freshman year,” Schmid said. “So, that’s positive and that shows forward progress. We’re really excited to get to see her compete again.”

Noel added that she has big expectations for herself, as well as the Hawkeye women’s tennis team.

RELATED: Noel to return to Iowa for her second season of college tennis

The only concern for Noel this season is the lingering effects of her ankle injury.

“It’s gotten a lot better over the course of the last three weeks or so, so I’m just hoping for the best,” Noel said. “We’ll see, it’s not 100 percent, but I don’t think it will be for quite a while now. It’s more of a mental thing than anything right now.”

“I think, with any injury and any athlete having to go through it, there’s definitely a level of trust in whatever you hurt that you can come back,” she added. “I don’t think that’s exclusive to me, but it’s definitely something that I work on every day.”

While the injury may present minor physical limitations for Noel, she is confident she can compete at a high level against her opponents.

“I am confident that we have the makings of a great team and a great season ahead, but I definitely think we just have to go to work every day,” Schmid said. “I think there’s a lot of really good teams out there in the nation, and a lot of really good talented teams working hard, so as much as having some confidence helps, I think it’s important to stay humble and be committed to try and get better every day.”

Noel is taking the season day-by-day as she, and the Hawkeyes, begin competition again.

“I think the team is in a really good place right now,” Noel said. “We just gotta keep moving forward.”