The ‘Oracles of Iowa City’ project, which features murals designed by Antoine Williams and Donté Hayes in collaboration with Public Space One and the Center for Afrofuturist Studies, have been installed on the Capitol St. parking ramp. 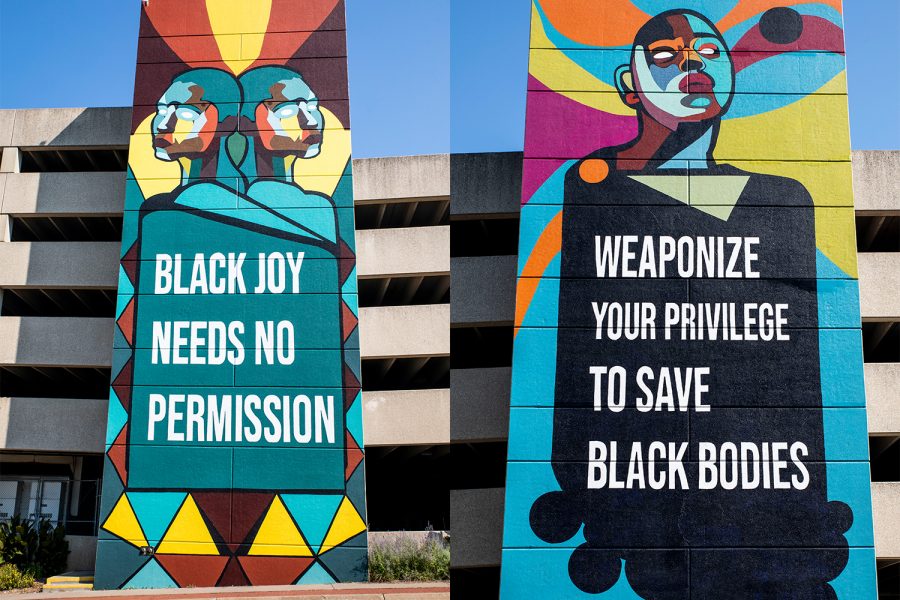 A mural is seen on Burlington Street on Monday, Aug. 30, 2021. Oracles of Iowa City is a mural project in collaboration with Public Space One and the Center for Afrofuturist Studies.

Overlooking East Burlington Street, a pair of striking murals portray the bold statements, “Black Joy Needs No Permission” and “Weaponize Your Privilege To Save Black Bodies.” These murals, part of a project entitled The Oracles of Iowa City, were completed on Aug. 25.

Co-designed by artists Antoine Williams and Donté Hayes, in collaboration with Public Space One and the Center for Afrofuturist Studies, the theme of the Oracles stems from a concept by civil-rights activist and scholar W.E.B. Du Bois called double consciousness — an internal conflict thought to be experienced by Black people in an oppressive society.

“It is a peculiar sensation, this double-consciousness,” Du Bois wrote in his book, The Souls of Black Folk. “This sense of always looking at one’s self through the eyes of others, of measuring one’s soul by the tape of a world that looks on in amused contempt and pity.”

With this concept in mind, Williams and Hayes designed the Oracles to speak from two perspectives as a Black person in Iowa City.

“We saw that as a great idea to begin this design to speak about the double consciousness from two points of views as a Black person, especially living in Iowa or Iowa City,” Hayes said. “So that’s why on one Oracle, it says, ‘Black Joy Needs No Permission.’ So, it’s like speaking to the Black people in Iowa City: when you walk in those streets, you’re not alone — that you can be proud of yourself.”

Williams said the murals were also created in response to last year’s Black Lives Matter protests, to encourage the continuation of conversations about racism that were being had at the time.

Lead painter of the Oracles Jill Wells said the murals have garnered a variety of public reactions, both positive and negative, especially the one stating, “Weaponize Your Privilege To Save Black Bodies.” Some people even voiced their opinions to her while she was painting.

“Because ‘weaponize’ was the one that I think was such an emotionally charged reaction, one way or the other, like people would drive by and they’d hang out their windows and they’d be like ‘I love it,’ or they would be like ‘You’re racist,’ and they would yell that out,” Wells said.

With the state’s ban on teaching divisive concepts in Iowa schools — touted by Iowa Gov. Kim Reynolds as a ban on critical race theory —  Sikowis Nobiss, executive director of Great Plains Action Society and Ad Hoc Truth and Reconciliation Commission board member, said the significance of the Oracles’ bold statements is amplified.

“I think it’s important because history is very whitewashed, and a lot of people with privilege and power are very coddled,” Nobiss said. “And right now, statements like this are even more important because of the ban on Critical Race Theory in Iowa.”

Hayes said the murals not only speak to the existence and lives of Black people in Iowa City, but encourage action outside of the artwork.

“It’s like a call out, a beacon, to speak to those who are Black in that space, and it’s also speaking to those who aren’t Black — to see what you are going to do outside of this mural,” Hayes said. “This mural is just one thing. This is not the end all be all.”

The co-designers emphasized that the murals are not simply a “one-time thing.”

Through this mentorship, the artists are shown the ropes of creating public art, Hayes said, potentially allowing a new generation of Black artists to create murals across the state and in spaces where Black artists are not generally represented.

A public reception in celebration of the murals will be held on Sept. 27 from 5:30 to 6:30 p.m. at the UI’s Voxman School of Music. A community feedback session will take place on Oct. 2 at 4 p.m. in the Iowa City Public Library.

“This is speaking truth,” Hayes said. “And that’s what oracles do — they speak the truth that you don’t want to hear so you can have a better future.”