The guidelines and procedures in sexual assault and misconduct on college campuses can serve as a barrier to cases getting reported. 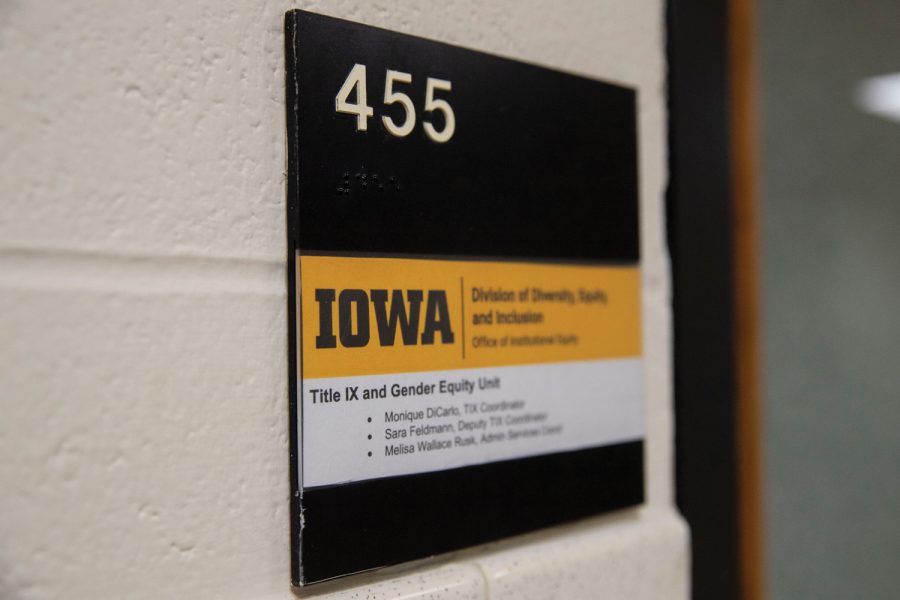 The Title IX and Gender Equity office is seen in Van Allen Hall at the University of Iowa on Sunday, Sept. 19, 2021.

We are in the red zone.

At the University of Iowa, we as students are at our most vulnerable for sexual assault. This is why the time period is called the “red zone,” as a majority of sexual assaults occurs on campuses during the first few months of the fall semester. This doesn’t really come as a shock, as the time frame coincides with back-to-school parties and when freshmen are at their most vulnerable, because they’re unfamiliar with the campus and the reporting process.

Sexual assault and misconduct are unfortunately a pervasive issue on college campuses— including at the UI. In 2019, there were 521 reports of incidents to the UI’s Title IX and Gender Equity Office. Of those reports, 153 were for sexual assault and 182 for sexual harassment.

So, why isn’t it getting reported? Survivors have cited several reasons, such as lack of proof, fear of retaliation, or not knowing how to report. Those who wish to report on college campuses are often met with a complicated process that discourages them.

While members of our student body have called for institutional change in the UI reporting process, the system is more complex than what most people may think. The problem and irony lies in the idea that the reporting process itself is what sometimes drives survivors away from reporting their case.
What is the UI reporting process?
At the UI, the Title IX and Gender Equity Office is the home base for reports of sexual misconduct and assault when it involves members or visitors of the university community. However, the office itself does not investigate the reports. The Office of Student Accountability investigates complaints involving student respondents, and the Office of Equal Opportunity investigates complaints involving employee respondents.

In Process A, the investigation meets Title IX regulations and includes a live hearing, with the complainant and respondent. If the respondent is found to have committed a policy violation, it can result in their expulsion or suspension. Process B is enacted if the alleged behavior doesn’t fall under Title IX’s definition of sexual harassment and regulations and would not result in suspension or expulsion. While other institutions like the criminal justice system can charge an individual with sexual assault, Process A and B can only determine if a policy has been violated.

Finally, the Adaptable Resolution is a voluntary process that addresses the harm instead of finding a policy violation. The complainant and respondent must agree to partake in this process, and it ends once both parties agree on a resolution agreement.
Complications in the process and Title IX barriers
Not only is the reporting process complex, but certain guidelines and practices within it often drive victims away from initiating a case.

Because the UI receives federal funding, the institution must follow Title IX guidelines — including when it comes to handling sexual assault and harassment.

Title IX in some ways has complicated the process and keeps victims from reporting. Changes made by the Trump Administration and former Secretary of Education Betsy DeVos are alarming for survivors because certain regulations jeopardize victims’ ability to report harassment.

While the administration and DeVos argued that these new guidelines were to safeguard all students — including those who are falsely accused — they’re actually failing to protect survivors.

First, their decisions to release these changes are rooted in an issue that doesn’t really exist. In fact, only 2 to 8 percent of sexual assaults are falsely reported, which is a similar percentage rate for other crimes.

Under new regulations, the bar was raised for what counts as sexual harassment under Title IX. Before, it was defined as “unwelcome conduct of sexual nature.” Now, new rules implemented a stricter standard and defined it as “unwelcome conduct that a reasonable person would determine is so severe, pervasive and objectively offensive that it denies a person access to the school’s education program or activity.”

The issue with the change is that it essentially says a student wouldn’t be able to complain until they’re driven out of class or their academic process is disrupted. But it shouldn’t have to reach such high stakes before institutions can take action.

Instead, universities should be allowed to stop harassment from rising to that level in the first place.

The second concern is a change in evidentiary standard. While the UI uses the preponderance standard, it raises concerns for survivors at other institutions who choose to follow the clear and convincing standard because it sets a dangerous precedent for investigations.

Under new guidance, schools can use the preponderance or clear and convincing standards. The clear and convincing standard is considered a “higher burden of proof,” because evidence must be substantially greater than a 50 percent likelihood of being true. In general, there is often minimal evidence when an assault occurs — such as eyewitnesses — as many assaults occur behind closed doors.

Under new rules, schools also must require cross-examinations of parties in a Title IX case. At the UI, this occurs during the live hearing in process A, where a representative or lawyer of the respondent can cross-examine the complainant.

This can directly drive away survivors, as the new policy requires them to talk about their own trauma, but not on their own account.

Research has also shown that cross-examinations can retraumatize survivors and serve as a barrier to others from reporting their assault. It’s also proven to be a poor tool to judge the accuracy in cases of sexual violence.

It’s irresponsible to force universities like the UI to require this policy, especially with previous guidance discouraging such practice, because it could possibly escalate a hostile environment.

The investigation, in general, is a dragged-out process. On average, an investigation lasts 154 calendar days, according to a 2019 report. Several factors affect the length of the investigation and understandably so, such as having to interview multiple witnesses and whether legal representation is involved.

But knowing the investigation is a drawn out, lengthy process doesn’t necessarily appeal to survivors, as it forces them to possibly relive their trauma. This could prevent them from moving forward in the healing process for months.

We shouldn’t be living in a world where survivors feel they cannot depend on those in power to protect them against sexual violence. If we have a reporting process that drives away survivors instead of helping them, then universities are setting a dangerous precedent for future cases, which only harms survivors in the process.